"Nepal is a country Endowed With High Potential for Alternative Energy Resources" : Pokharel 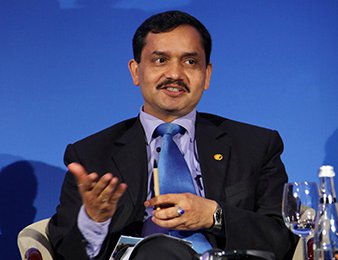 How do you see the state of alternative energy in Nepal? What is the level of contribution in energy supply?

Nepal is a country endowed with high potential for renewable energy resources like hydro, solar, wind, biomass etc. The country has abundant hydroelectric potential. The theoretical hydroelectric potential has been estimated to be as high as 83,000 MW of which 42,000 MW are considered to be technically and economically feasible. Similarly, Nepal also has huge potential for solar energy. The country is located at favorable latitude that receives ample amounts of solar radiation. From solar energy alone, around 2,920 GWh of energy per year can be harnessed with utilization of just 0.01% of the total land area of Nepal. Other renewable energy sources abundantly available in the country are biomass and wind. The sustainable supply of fuel wood from reachable area of all land resources is around 12 million tons. Likewise total production of animal dung is about 15 million tons. Utilization of 10% of the total area of Nepal could commercially generate more than 3,000 MW of electricity with consideration of the installed capacity of 5MW per km2.

However, we are not able to fully convert it into useful energy. Presently, around 12 % of population is electrified by alternative energy sources like micro hydro plant and solar home system. Around 900 thousand households are using clean energy solutions like improved cook stoves, biogas etc. for cooking.  Although, the share of alternative energy sources is still small, it has increased by more than 50% since 2005.

What role Alternative Energy Promotion Center has been playing in Nepal to promote people to use the alternative energy?

Alternative Energy Promotion Center is a national focal government organization for promoting renewable and alternative energy technologies in Nepal. AEPC is acting as an intermediary institution between the operational level i.e. NGOs/private promoters of renewable energy and the policy decision levels in relevant ministries.  AEPC's activities include renewable energy policy formulation, planning and facilitating the implementation of the policies/plans, standardization, quality control and monitoring.

What is the role of Alternative Energy Promotion Center to increase the access of rural population in electricity?

Since establishment AEPC’s main focus is has been to maximize the service delivery and service delivery efficiency in the use of renewable energy resources and technologies in the rural areas and to provide opportunity to low-income rural households to use RETs.  Therefore, nowadays we can see that there is load shedding in urban areas but even remote places of Nepal are electrified by micro-hydro plants and solar PV systems.

Why alternative energy is important for the country like Nepal? As an executive director of AEPC, what are your views?

In my opinion, alternative energy or renewable energy is only one viable mean in Nepal to increase access of energy to its population. As you know, Nepal has diversified land structure from plain to high Himalayas and also settlement pattern is scattered and sparse. National grid extension in some places is not economically feasible. Big hydro projects need a huge investment and all the petroleum products consumed in Nepal are imported from India or overseas in the refined form for direct consumption which is causing the economic burden for the country.

The high potentiality of the renewable energy resources available in the country is the most appropriate option for Nepal. It also helps to reduce the dependency on the traditional biomass energy resources and fossil fuels and to manage the energy crisis of the nation. This ultimately helps to minimize the degradation of the environment.

It is said that the alternative energy is expensive comparative to the other traditional sources. How do you look at it?

What is the reason behind celebrating the Alternative Energy Week?

Among various alternative energy sources, which is more popular?

In my view, all of the RE technologies promoted by AEPC are quite popular amongst its users. This can be justified with the numbers of users or beneficiaries of these technologies. The use of MH and Solar PV cannot be weighted on same basis with the Biogas and ICS. The earlier two are mainly for lighting whereas the others are for clean cooking mechanism. Besides, MH and Solar are complementing technologies. These two technologies are not promoted in same area. AEPC has clear well written policies that the duplication of technologies is not allowed.

At a time when the power cut hour is increasing due to lack of power supply, don’t you think solar energy can substitute traditional energy?

Of course, there is no doubt regarding the fact that Solar energy based technologies such as Solar Photovoltaic or Solar Thermal systems are the best substitutes. Right now, in the urban sector, we can see individual households opting for small scale Solar PV solutions for home-use. Even the institutions like banks, corporate offices, hospitals have adopted larger size system to meet their immediate energy needs. Besides Solar PV which generates direct electricity; Solar Thermal systems also play a crucial role in minimizing use of electricity from national grid as well as reduce dependency on imported petroleum products.

Besides solar, bio-gas and micro-hydro, what is the state of wind power?

As stated above, Nepal also has a great potential for harnessing of wind energy. AEPC is carrying out wind mapping in several districts. The collected data is very crucial for designing wind power systems. AEPC is developing policy to promote wind energy technology. AEPC has also addressed subsidy mechanism for promotion of wind energy technologies in the upcoming subsidy policy.

How Nepal’s development partners are supporting in the promotion of alternative energy in Nepal. Can you explain the countries involved in the area?

ARUN III Getting Ready To Go By A Correspondent 7 months, 2 weeks ago

ELECTRICTY DEMAND Managing Gap By A Correspondent 9 months ago

Nepal To Construct 23 High-Capacity Transmission Lines Across The Country By Agencies 10 months, 2 weeks ago