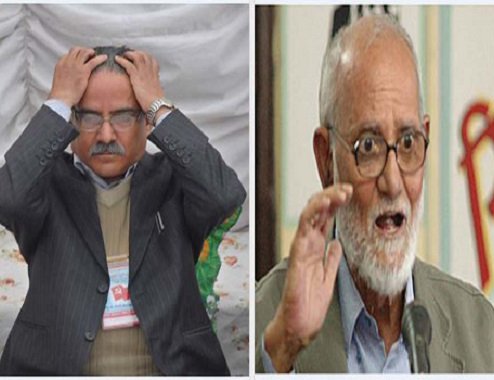 "We will throw away all the agreements with the political parties if they did not allow the current government to hold the elections by May-end," threatened UCPN-Maoist leader Prachanda. Although his statement made racy news headlines, it weakened his position from what it used to be. The political implications for Dahal are he will be in a very difficult situation.

Had Koirala been powerful enough to make and break things, the situation would have been different and Koirala would have become the prime minister now. The reality is different from rhetoric of Congress leader Koirala.

Facing public humiliation one after another, in scandals ensuing out of journalist Dekendra Thapa's case to accumulating hefty commission in power deals, prime minister Baburam Bhattarai has proposed his party chairman Pushpa Kamal Dahal as his alternative for the prime minister-ship. Although there is no substantial ground on Bhattarai's statement, Dahal has responded to him.

As the Maoist sixth general convention is coming closer, Bhattarai's proposal for Dahal as a prime ministerial candidate is politically meaningful. Although Bhattarai has publicly declared that he does not have any intention to contest for the post of party president, Dahal's position is still unsafe.

Even president Dr. Ram Baran Yadav has backtracked from the process of issuing notice seeking a consensus candidate to lead the next government.  Although president Dr. Yadav still issues sermons to political leaders, he has decided to stay in the sideline after the current political mess after eight notices.

As the common people are yet to show any sign of being ready to join the street protests, the proposed agitation called by CPN-UML and Nepali Congress will have little impact on the government. Similarly, there is no sign yet of any breaking in the alliance between Samyukta Loktantrik Madheshi Morcha and UCPN-Maoist. As long as the alliance continues, opposition alliance cannot harm the government. Knowing their strength, UCPN-Maoist is playing the political game, to fuel the prolonged political instability.

Whatever their political posture the leaders have been showing to the public, they are incapable to change the political course. In the given political scenario, it is unlikely to see any political settlement in near future.

The agitation announced by ruling and opposition parties can create political chaos and intensify the instability but it cannot bring any solution at all. The new political alliance made between CPN-Maoist and  Madheshi Janadhikar Forum and Sarat Singh Bhandari led Madheshi Socialist party indicated that the NC-CPN-UML led opposition alliances are not powerful  political alliances.

Although the president has decided to stay in the sideline from the government’s affairs, President Dr. Ram Baran Yadav is in an important position to change the political equation. By announcing the notice for prime minister, Dr. Yadav has made it clear that the present government is just a care taker government and he can replace this government in case of major political disputes. What president is waiting is a blink from the international community to act.

Nepal's reality does not lie on the rhetoric of political leaders, as they missed is to gauge the reality of the country. Whoever may come to power, Nepal's harsh political reality is continuation of a prolonged political instability. The words of the leaders cannot change the hard realty of the Nepalese politics. Like or unlike it, Nepal is rocking and political leaders are no exception.

Delhi With Support From A Section In Nepal Working To Dislodge Me: Prime Minister Oli By NEW SPOTLIGHT ONLINE 1 week, 4 days ago

NEPALI POLITICS Unity Of 12 Point Forces By A Correspondent 2 weeks, 2 days ago