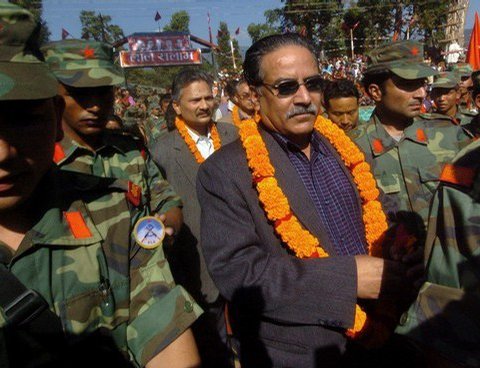 UCPN-Maoist and Nepal Army do not have anything in common at the ideological grounds. They do not share any values and ideals. They had fought each other for almost a decade during the insurgency. There was hardly anything that brought them under one embrace until recently. The latest political course, however, has brought the foes together as friends in need.

When the leaders of the country’s two major political parties, Nepali Congress and CPN-UML, have done nothing except paying the lip service to support the army, UCPN-Maoist government has sat by the army’s side in defending the case of Nepal Army Colonel Kumar Lama, who was detained in England on charge of torturing people during Nepal’s insurgency. Maoist stand will help it in its all out battle with its arch rivals, the opposition parties.

UCPN-Maoist coalition partners are blaming the Nepali Congress, CPN-UML and president Dr. Ram Baran Yadav for the fate of Colonel Lama in the foreign land.

“If the president had promulgated the Truth and Reconciliation Commission Ordinance, and the Nepali Congress and CPN-UML not scratched the wounds of Dailekha, Nepali security personnel would not have to face detention in the U.K,” said UCPN-Maoist chief Prachanda. “They have to take the responsibility for the mess now.”

Prachanda’s statement is well calculated as he knows the importance of Nepal Army’s support in waging his party’s last battle with the country’s major political forces, including the president.

With its democratic orientation and traditional base, Nepal Army has no preference to associate with the UCPN-Maoist in normal circumstances. Its relationship with the party was limited to being with the UCPN-Maoist-led government, especially as there was no other option before it.

As such, the relationship between UCPN-Maoist and Nepal Army has never been good since its beginning. UCPN-Maoist cadres humiliated Nepal Army in joining the peace process. The bitterness peaked when the previous Maoist-led government of Prachanda dismissed then army chief Rukmangad Katawal. With the backing from president Dr. Ram Baran Yadav, Katawal survived the Maoist design and Prachanda tendered his resignation.

Since they came to power again, UCPN-Maoist leaders have been making every effort to improve their relations with Nepal Army despite the past bitterness.

Organized and professional, Nepal Army understands the situation. The statement issued by Nepal Army following the arrest of Colonel Lama indicated its maturity in performing its role.

The UCPN-Maoist stand on the case was understandable. Colonel Kumar Lama’s case was like a Damocles sword hanging over the head of Maoist leaders. It was message to UCPN-Maoist leaders that they were not safe to travel abroad either.

UCPN-Maoist, after joining in the open politics and leading the government, needed international travel for sharing experiences and gaining exposure. They would need to meet political leaders abroad, like the CPN-UML leaders did in the past. Lama’s case meant losing their own opportunity to travel and remain within the country’s confines.

Whatever its image abroad and its ideology at home, UCPN-Maoist is an organized political force and still the largest party of Nepal. Its leaders are reportedly implicated in some serious incidents of human rights violation. According to the United Nations Office of the High Commissioner for Human Rights, out of 13,000 cases of rights violation, 100 are of serious nature.

The decision by the ruling Maoist-led coalition to withdraw the cases against convicted criminals and to promote the security personnel implicated in the rights violation has irked the international community, particularly the European Union. Compounding with that is the failure of the political forces to make a serious move to establish an independent and credible Truth and Reconciliation Commission and the Commission on the Disappearances. Although both the commissions are the integral part of the Comprehensive Peace Agreement, political parties spent most of their time in the army integration process.

After the arrest of Colonel Lama, UCPN-Maoist-led government met the president and urged him to issue the Truth and Reconciliation Ordinance. However, various European countries expressed reservation over the TRC ordinance, saying that it did not meet the international standards.

UCPN-Maoist assured the international community that the party was committed to forming a “powerful” and “independent” TRC to deal with all the cases of serious human rights violation that took place during the decade-long insurgency.

According to lawyers, the proposed TRC ordinance, which is awaiting approval from president Dr. Yadav, has the provision of giving a blanket amnesty. While referring indirectly to the recent detention of Colonel Lama in London, the UCPN-Maoist has also sought cooperation to address the cases of human rights violation, by maintaining that all issues and cases concerning the decade-long conflict should be dealt in accordance with the spirit of the CPA.

While expressing serious reservation over the proposed TRC, European Missions, along with Norway and Switzerland, in a joint statement, demanded formation of an independent and credible TRC resulting from extensive public consultations and regard for the victims’ needs. They also cautioned that giving the TRC the authority to grant amnesty for serious human rights abuses would not only breach the international law but also fundamentally weaken the foundation for a lasting peace in Nepal.

“It is not a recipe how the TRC should look. But it is an advice that lasting peace needs a broad consensus, which means families of victims have justice,” he said. “And that is not referring to one particular case which was blown out of proportion recently. It refers to all the victims of the conflict.”

Opposition party leaders as well as human rights activists have said that the proposed TRC should not include the general amnesty provision.

The opposition leaders also asked president Dr. Yadav not to endorse the proposed TRC ordinance as it was deeply flawed and that such a TRC would not help establish a lasting peace.

CPN-UML leader Agni Kharel, who was closely involved in the preparation of the TRC draft bill in the erstwhile parliament, argued that the president should not endorse the TRC ordinance as it includes granting amnesty to even those who are accused of serious human rights offences, such as murder, torture, rape and kidnapping.

Member of National Human Rights Commission Gauri Pradhan said general amnesty to the perpetrators of serious crimes could erode Nepal’s credibility. He also said there is no point in forming a TRC that does not meet the international standards and is not accepted by the wider world community.

Pradhan argued that universal justice could be invoked if the issues of human rights violations are not addressed as per Nepal’s commitment to human rights in various international human forums. “Such cases should not be construed as international interference,” he added.

All these incidents and arguments are pushing the country’s major forces towards making and unmaking their alliances. In a strange way, UCPN-Maoist is defending Nepal Army. Intriguingly likely in all this is the fact that Nepal Army’s peacekeeping missions are likely to see restrictions, pushing the UCPN-Maoist into isolation.

Delhi With Support From A Section In Nepal Working To Dislodge Me: Prime Minister Oli By NEW SPOTLIGHT ONLINE 5 days, 5 hours ago

NEPALI POLITICS Unity Of 12 Point Forces By A Correspondent 1 week, 3 days ago