The Party national convention that took place after 21 years--first time in an open democratic atmosphere--has exposed Prachanda to the hilt; His credibility is at its lowest ebb. 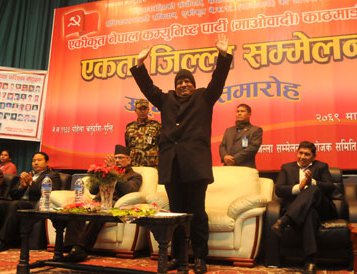 If Pushpa Kamal Dahal is to be trusted in his latest assessment, Nepal is no more the 'semi-colony' post Sugauli treaty that its sovereignty is safe and it conducts its business or the state affairs without outside interference. He wants Nepal to be a rich country now so that it commands respect from all over the world. He says only the rich countries are respected by others. But Prachanda fumbled once again as he spoke to the media in Hetauda. "We all had agreed to make Sushil Koirala the Prime Minister, but it seems external forces got active and we could not implement that agreement." Prachanda knows his comrades still trust in what he tells them. Any lie or truth spoken to outsiders will be taken by them as a 'tactical statement; for the success of the 'revolution'.

But the Party national convention that took place after 21 years--first time in an open democratic atmosphere--has exposed Prachanda to the hilt; His credibility is at its lowest ebb. And Prachanda is fast transforming into an 'agent of hegemonic forces' (Read India) from a 'revolutionary', an image that he built during the decade long conflict at the cost of 16,000 precious human lives. His political document suggesting that Party shed anti-Indianism as its long pursued policy was not only challenged by some stalwarts like Deputy Prime Minister and Vice Chairman Narayan Kaji Shrestha, but also created ideological crisis for its delegates who were indoctrinated to be anti-Indian to be revolutionary and a communist. The issue got shelved for the moment as Prachanda sensed the anger among delegates, but that has given an opportunity to Communist Party of Nepal-Maoists a missile to attack the Prachanda led Party as a pro-India outfit.

Prachanda's suggestion that any border dispute that remains unresolved be addressed through referendum brought him into further controversy. A border dispute involves at least one or more countries, and border or territory is directly linked with nationalism. Which other country had Prachanda in mind when he said such disputes be settled through referendum? The Only country that Nepal's border disputes remain unsettled is India. Prachanda, by S D Muni's revelation had given in writing to India as back as in June 2002 that he would not go against India's major interests. Prachanda's political document presented in the Hetaunda conclave saw that commitment being honored at least from his side, but all that seems to take a heavy toll on the image and credibility of the UCPN-M in general and Prachanda's in particular.

Will that mean post Hetaunda Maoist Party will lose its clout in national politics? Maoists have become stronger over the years, especially after their joining the peace process in 2006, partly because of its organizational strength, and partly because of total surrender by the major pro democracy parties like the Nepali Congress and the Communist Party of Nepal-Unified Marxist Leninist (CPN-UM L). The later two parties have been campaigning in different parts of the country seeking ouster of Baburam Bhattarai as the Prime Minister. But the duo has not shown the courage to review their political policies and their blindly following the Maoists agenda for the past six years. In other words, these parties own Maoist agenda but have expressed reservation to supporting the Maoist leadership any more. Until and unless they review their own policy and the basis of their support to the Maoists six years ago, people are unlikely to support any movement that also seeks to catapult them to power,

Republic, secularism and federalism were the agenda that the UML and the NC borrowed from Maoists. The people had not been given a chance to be party to this switch as the NC and the UML succumbed to Maoists pressure that they would continue to be seen as regressive forces and supporter of the Monarchy if they did not embrace these radical changes. NC and UML would not regain peoples support until and until they explain where they differ with the Maoists. If they fail, Kamal Thapa's Rastriya Prajatantra Party-Nepal and not the NC and the UML would emerge as the alternative to the Maoists Party in the days to come if the key forces that dominated the 1990 constitution tried to move away from that constitution and its fundamental values. UCPN-M has tried to emerge as the key pro-India force, but failed to don the cap of nationalism and democracy.

China’s Rapid Transformation And Lessons To Learn By Krishna Silwal 11 hours, 41 minutes ago