As activities of Nepal’s two neighbors, India and China, intensify, Nepal seems to be entering into a new great game 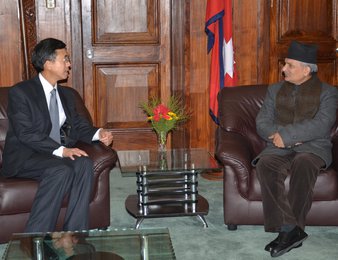 The security agencies have raised some concerns over the agreement the Chinese companies Huwawei and ZTE have entered with Nepal Telecom for installing the next generation network in Nepal. In a note, the Research and Analysis Wing (RAW) has alerted that "bugged equipment to monitor/intercept any communication carried between India-Nepal and India-Maldives, through this cooperation, cannot be ruled out," writes India’s leading news paper, Times of India, quoting sources as saying on its recent issue.

As Indian officialdom is panicking about China's involvement in the telecom sector, Chinese officials ignore Indian activities in Nepal.  Chinese Ambassador to Nepal Yang Houlan, who made a farewell call on Nepali Prime Minister Baburam Bhattarai, expressed his great appreciation on the strong support from Prime Minister Bhattarai during his tenure. According to Chinese Embassy's website, Yang also said he is full of hope and confidence in the prospects for developing partnership of comprehensive cooperation in the future.

These two statements speak volumes about Nepal’s state of relations with India and China. At a time when Deputy Prime Minister Naryan Kazi Shrestha and CPN-Maoist are openly blaming growing Indian meddling in internal political affairs of Nepal and Chinese companies are losing projects one after another, Chinese media and diplomats just ignore this. Yang, who is transferred to another strategically important country, that is, Myanmar, expressed his complete satisfaction with the government.

Chinese Ambassador Yang, who fluently communicates in English and is known for his open diplomacy, will be replaced by new ambassador who can only speak Chinese with a security background. China seems to be deciding to switch to a closed door diplomacy from Yang's open and transparent one.

During the period of Yang, China was able to boost its diplomatic activities and image in Nepal. However, it has lost some ground in Nepal. Whether in the proposal of Trishuli A augmentation, West Seti Hydropower, Pokhara International Airport or purchasing of Chinese Aircraft, Yang's open diplomacy failed to bring any results. The opposition is so massive that all Nepalese political forces, irrespective of ideology, joined against these projects.

In Trishuli A Augmentation, the oppositions including Nepali Congress, CPN-UML, CPN-Maoist, RPP, and UCPN-Maoist combined their voices together. Although CPN-Maoist Vaidya faction is reportedly claimed as closer to China, a trade union affiliated with it has been creating troubles in Trishuli A. Interestingly, some senior government officials, who were thrown out for signing the Memorandum of Understanding with Three Georges Company for the construction of West Seti, joined anti Trishuli A augmentation scheme.

According to Chinese Embassy website, Yang said that he had benefited a lot during his time spent in Nepal. Yang also said he is full of hope and confidence in the prospects for developing partnership of comprehensive cooperation in the future.

Nepal's two neighbors have both competitive and cooperative relations existing in Nepal. Whenever they compete with each other, the trouble for Nepal begins.

"In broader terms, China's core interest is Tibet and recently its commercial interest has also increased," said a former diplomat on condition of anonymity.

India sees Nepal as its exclusive periphery and it has created certain boundary for its own safety. As Nepal government abides by this and China limits its activities, India tolerates it. Once India considers Chinese activities as crossing the limits, it acts accordingly. India allows two Chinese Telecom companies to work in its own country; it sees both the companies as a security threat when they win a project under an international bid in Nepal.  Although China is not competing with India in Nepal, China opposes hegemony of India.

As French Journalist and writer Eric S. Margoliswrites in his book War at the Top of The world, the country like Nepal has to survive in conflict, competition and cooperation of its two big neighbors.  Once they compete, there will be trouble. However, their cooperative nature of relations will bring peace and stability.

“A new Great Game is afoot at the top of the world. The chain of mountain ranges, plateau and valleys that begins in Afghanistan and Kashmir, and then sweeps 2,500 miles (4000 km) across the Indian subcontinent to Burma (now Myanmar), is fast becoming one of the globe’s most volatile and dangerous geo-political fault zones."

This way or that way, Nepal has been passing through a new great game played by Asia's two major powers. Nepal's position will depend upon how cleverly it protects its interest in establishing the relations of trust with them.

China Partially Lifts Lockdown In Southern City of Guangzhou After Protests By Agencies 15 hours, 58 minutes ago