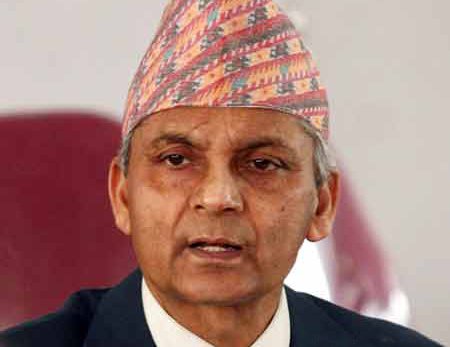 At a time when the opposition political parties have already rejected a number of proposals forwarded by UCPN-Maoist coalition, another proposal to form a neutral government under the incumbent chief justice, Khil Raj Regmi, is inviting more heated debates.

Although the appointment of incumbent chief justice is constitutionally controversial, this is emerging as a strong option with the backing of CPN-Maoist and Madheshi Janaadhikar Forum Nepal. If all these parties continue to back this, president Dr. Ram Baran Yadav, who has been asking prime minister Baburam Bhattarai to pave the way for a new government, will have to persuade Nepali Congress and CPN-UML.

Since some senior CPN-UML leaders have already made it clear to President Dr. Yadav that they are not rigid on any single option,  if the new proposal brings about a political settlement, they will agree on that. Even president Dr. Yadav gave a nod to alternatives to present opposition candidate Sushil Koirala, who has expressed his dissatisfaction with the president.

As UCPN-Maoist led ruling alliance, CPN-Maoist and Madheshi Janaadhikar Forum Nepal stand together on the proposal, it is almost certain that Koirala will be dropped and the option to form a neutral government under the leadership of the incumbent chief justice, former chief justice or leaders of small parties may be possible.

However, the proposition to appoint incumbent chief justice as a caretaker government will badly damage Nepal’s three decade long exercise of separation of power.

However, a powerful section in UCPN-Maoist, including prime minister Baburam Bhattarai, is defending their new proposal.

“We have made enough proposals and Nepali Congress and CPN-UML have to accept our new proposal without any hesitation,” said UCPN-Chairman Pushpa Kamal Dahal Prachanda.

As Nepal’s state institutions have been in the process of destruction one after another in the last seven years after Maoist joined the mainstream politics, this will finally end the concept of independent judiciary.

Looking at the current political trend, it indicates that political parties are likely to make consensus on a neutral government under a leadership of former chief justice or incumbent chief justice. UCPN-Maoist and ruling alliance have already made it clear that an agreement for neutral government led by an independent person will be likely. Along with Samykta Loktantrik Madheshi Morcha, UCPN-Maoist, CPN-Maoist and Madheshi Janadhikar Forum Nepal also gave a nod for neutral government opposing Nepali Congress and CPN-UML. Although CPN-UML president Jhalnath Khanal and Nepali Congress president Sushil Koirala rejected the call for consensus government under a neutral person, powerful groups within CPN-UML and Nepali Congress are also proposing a government under a neutral person. Following general convention of UCPN-Maoist, parties are likely to discuss the criteria for the independent person.

As political confrontation continues, President Ram Baran Yadav is consulting people from different walks of life. At a time when many other parties are suggesting neutral caretaker government under the leadership of former judges, president Yadav is likely to call two opposition leaders to make a certain consensus on the issue of leadership of prime minister.  It is reported that President Yadav is also in favor of neutral independent government and his relations with Nepali Congress president Sushil Koirala is now sour. Having a constitutional authority, the president ‘s role is very important now. If he finds support, the president is likely to appoint the new government.

The ruling Sadbhawana Party (SP) has said that the president should approve the election related ordinances, if the major opposition parties --Nepali Congress (NC) and CPN-UML-- fail to forge consensus on the formation of a national consensus government.

Although a prolonged political crisis is likely to continue, with political parties opposed to one another, a neutral governmentis an emerging option before president Yadav. Even for other political parties, this seems to be a likely solution.