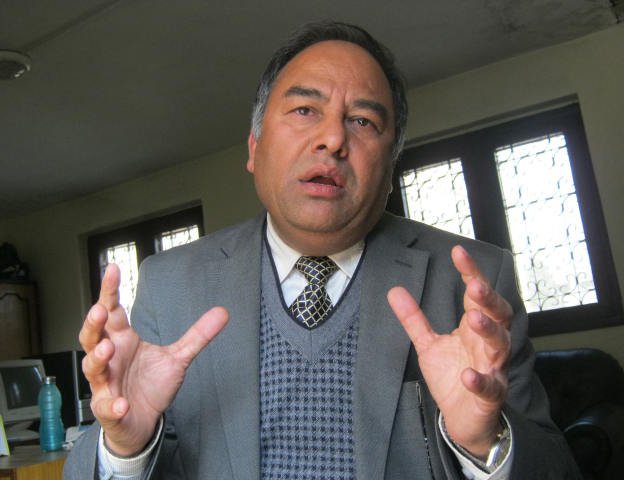 Dr. DINESH CHANDRA DEVKOTA, former vice chairman of National Planning Commission, is not a new name. At a time when the government is preparing the next three-year interim plan, for the year 2013-2016, chairman of CPN-UML affiliated Intellectual Forum, Dr. Devkota spoke to NEW SPOTLIGHT on various issues. Excerpts:

At a time when a group of people have been floating the idea of a plan holiday, National Planning Commission is now working to prepare the three-year Interim Plan. How do you look at this?

Whatever the political situation may be like, Nepal’s economic development process will need to move on. The three-year Interim Plan can help sustain the progress we have made so far. I don’t agree that there is a need to have a plan holiday until settling the political issues. I don’t care whether it is three years, five years or twenty years plan; political parties need to agree on economic development agenda. In this context, a periodic plan is necessary. I know the country is politically in a very fragile state. But we cannot say to people that you need to wait until we have political stability to have development.

Don't you think there is a need political consensus for such a document?

Who will work to create the consensus?

What does the plan normally include?

The three-year periodic plan includes the government expenditure, tax, micro economic stability and other major development agenda, accommodation of foreign aid and target for the economic development.  If we fail to produce the three-year periodic plan, the whole process of foreign aid, including the support given by the World Bank, Asian Development Bank and other bilateral donor agencies will be affected.

During your tenure, there was controversy too. How did you settle it?

During my tenure as the vice-chairman of the National Planning Commission, we had shown the way to bring consensus in planning. I don't think it is a wise decision to say we will carry out development following the settlement of political agenda. People need development and prosperity all the time. In this context, an interim plan is important. No matter who leads the government and state of political scenario, people need development.  There is going to have some solution for this. From coming July, we won't have any plan. If there is no plan, it will affect the whole budget making process.  There is no planning, but NPC is distributing selling. If we fail to prepare the three-year periodic plan, the country will face economic crisis along with politics.

Why do we need planning at all?

It is very unfortunate that we have been discussing political agenda for the last 60 years or so, while undermining economic issues. Many countries in Asia which got independence have made big progress in settling their political issues. However, Nepal has been all the time involved in political crisis and economic agenda is rarely a matter of priority. South Korea, Vietnam, Thailand and many other Asian countries had similar economic status in the 1960s to that of Nepal. It is unfortunate that Nepal is now one of poorest countries having nothing to match these countries.

Why should Nepal need to give priority to economic agenda?

If we fail to give priority to economic agenda again, Nepal will go further below the present state. Nepal's two neighbors, China and India, are moving forward at an amazing pace. In Japan, the government has been changing every six months, but their economic progress remains high. We need to delink the agenda of economic development from politics. Once again there is the need of consensus for the overall economic development. The ruling party must take initiatives for this. We need to understand the fact that the country is yet to find political a framework despite so many political changes since 1950s. This has badly affected Nepal's overall economic agenda. Political leaders have to understand the fact that we need to have political stability for economic development. For this, the ruling parties must take confidence of opposition parties.

How do you see the implementation side of previous the three year plan?

Along with preparing the plan, there is also the need of building a strong mechanism for implementation.  The first three year interim plan prepared following the People's Movement II was unable to make progress. National Planning Commission needs to be apolitical in implementing projects. So many development projects were delayed. Implementation of Sikta River Irrigation project and study of West Seti Hydropower project was not done overnight. It took years to bring these projects to the present shape. They were possible because each of periodic national plan mentioned about them. Other examples are Middle Hill Highway and Kathmandu-Nijgadh Fast Track; these projects were there in all the plans. The only difference is the priority. When we talk about development issues, we must have periodic plans. When we had made efforts to bring the three-year periodic plan, the Maoist party vehemently opposed it.

Don't you think the process of preparation or writing the document has already been delayed?

It is definitely delayed, but we will need to work hard. Everyone needs to prepare the budget. Whoever may come to the government, they need a plan. The government does not have a plan now and it does not have any vision for the coming budget. We avoid this reality by saying that political instability is creating problems, but we cannot say similar things to Nepal's development partners. This will affect the process of Official Development Assessment (ODA). Without plan, the un-budgetary expenditure is likely to go up and it will create a bad precedent.  If we cannot d develop a plan, Nepal's overall economic situation will further deteriorate.

Why the Interim Plan then?

The planning document is necessary for all times because projection of national growth and country’s progress is always necessary. I think even the opposition party needs it. When UCPN-Maoist was in the opposition, they opposed the present three-year interim plan. However, they are now working under it. Similarly, other political parties will also join the government sooner or later, they too need development. Interim Plan’s document will be finally the document of the country which projects country’s development and directs work towards achieving it. The government can be changed at any time, but the planning document is necessary for them which cannot be changed in every six months or year. Planning document needs to be owned by all the political parties or nation.

What do you think is the major challenge?

One of the challenges for the present ruling party is how to bring the opposition parties to the consensus. The government has to work hard. How can one imagine the country without a planning document? We have been talking about foreign investment, bilateral aid and progress. How can one talk about progress without any reference document. If the political situation continues like now, you will still need to supply the medicine for the sick and run schools and hospitals.  There is no reason to go for a plan holiday. It will bring more problems in the future.  The National Planning Commission must formulate the plan document.

As Nepal is yet to settle the political disputes, what will the three-year interim plan do?

Political disputes will be there for a long time to come. But, it will very harmful for the country to continue the economic instability. Periodic plan is necessary because it will help give stability in the economic and development policy.

What Did Nepal Learn From Ghana? The Perspective By A Correspondent 1 month ago