At almost the final stage of its completion, the Chameliya Hydro Power Project is facing severe financial crisis due to the delay in payment by Korean-Exim Bank. 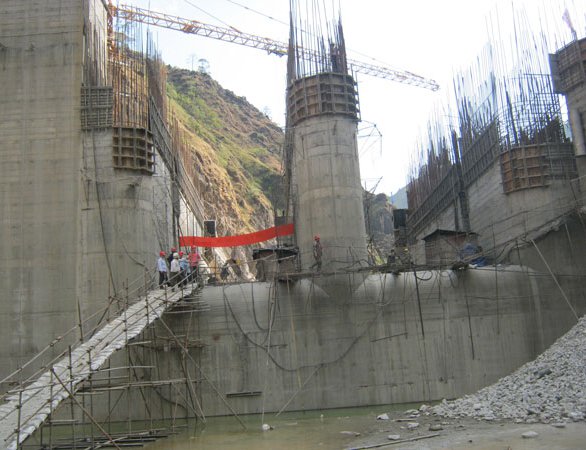 Due to political disturbances and some new technical problems, Chameliya’s initial schedule for completion was revised from May 2011 to a new deadline of March  2015. As there is a hiccup in the reimbursement of the additional funding from Korean-Exim Bank, it is now uncertain if the project will meet the new proposed deadline

Although Chameliya Hydropower project is the first of its kind constructed far from the capital with a concept of helping balance the regional development, the project has faced severe political, financial, geological and technical hiccups in its six years of construction period marking one after another delay in the commencement of work.

It is a first major project which has started during the period of politically most troubled time in the history of Nepal. Kicked off during the major political change of 2006, Chameliya encountered major technical difficulties when it faced geological constraints after squeezing occurred for a length of about 843 meters in the tunnel and a big hole was caused by landslide in the penstock zone.

Along with 32 days of far-western strike of May 2012, the disputes in land acquisition for transmission lines also delayed the project.  The additional landslides and the hole inside the penstock tunnel further complicated the project work. There are ways to tackle the technical and geological difficulties. However, recent financial problems are getting out of control of Nepal’s authority.

Korean Exim Bank, the main funding agency for the hydro-mechanical components, has shown reluctance to allocate the US$10.7 million additional funding, incurred due to the delay of four years and the additional technical problems.

The project was delayed by political disruptions and technical and geological problems occurred during the period and the estimated cost has gone up. Its revised cost has now reached US$ 158 million from the initial estimated cost of US$ 99.9 million.

As additional problems in the electro-mechanical components have surfaced, it is Korean Exim Bank which is responsible for the payment. However, the Korean contractors and Korean consultants do not get the money on the failure of Korean Exim Bank to release it.

Nepal Electricity Authority has been constantly writing letters to Korean-Exim Bank to provide additional costs. After increase in the price, Korean Exim Bank sent a review mission in December 2012, which principally agreed to provide the additional funding when the matter was discussed at the Ministry of Finance. “Korean-Exim Bank is now expressing reluctance in payment,” said Ram Chandra Pandye, general manager of NEA’s Generation.  As per the agreement from Korean-Exim Bank, the consultant and NEA jointly took a decision to extend the completion date up to 2015 March.

Korean contractors KHNMP have already proposed to steel lining in the 70 meter long portion of the tunnel built for penstock. They are demanding advance payment to initiate the work. KHNMP has already forwarded conditions that it needs advance payment before May to complete the project in the revised date of March 2015. Otherwise, the project will see a further delay causing huge losses to NEA. KHNMP is demanding 30 percent or 1.1 million dollars of the total cost of 3.8 million dollars to install the additional penstock pipe.

“Korean-Exim  Bank is yet to fulfill its commitment. If the Bank fails to release this amount of money to KHNMP, the project will not meet its new revised deadline of March 2015,” said Pandey.

According to Pandey, there is a deep hole ranging from 6 to 25 meters in the 70 meter area of penstock pipe. Korean consultants have recommended that concretizing alone cannot guarantee the safety of penstock and it required steel lining for protection. If there is a delay in month, it will push the project back. As the rainy season is coming closer, any delay in the work will make the future of the project uncertain. Last year’s  month long shutdown pushed the project behind by six months.

“Initially, Korean-Exim bank was positive but it is yet to release the fund,” said Pandey. “If Korean-Exim Bank delays the payment by a month, the project will be delayed for another year.”

According to Pandey, the bank said this is the new loan and it will take another four to five months for approval suggesting NEA and Nepal government to make arrangement for later reimbursement from Korean-Exim Bank. NEA has requested to pay 30 percent amount from 3 million dollars.

The dream of far western region to have a major power project seems to be on hold due to all these hassles. Started with an aim to balance the regional development activities, Chameliya hydro power project is the first major project constructed in far-western region with a capacity of 30 MW.

At a time when Chameliya Hydro Power Project is facing severe financial crisis at the final stage of its completion, a high-level mission headed by secretary of Energy Hareram Koirala has visited the project, inspecting sites and meeting contractors and consultants. The five-member high level commission consists of two board members of Nepal Electricity Authority, a senior official from Ministry of Energy and senior official from Nepal Electricity Authority. It intensively discussed the issue related to completion of the project as soon as possible. The high level delegation led by secretary Koirala and board members duo Manoj Kumar Mishra and Bibek Tated agreed to write the letter to Korean –Exim Bank.

The construction of civil works including main tunnel, dam sites and semi underground  powerhouse began in January, 2007 with target of completing by May 2011. Due to political unrest, it was rescheduled for June 2013.

Similarly, electro-mechanical and hydro-mechanical and Balanch-
Atteriya 132 K.V Transmission line work started in May 2009 by Korean contractor K.H.N.P. Korea with the target to complete it December 2011. It was rescheduled for August 2013 due to political unrest and other technical reasons.

Initially, the cost of the project was 99.9 million dollars  with soft 45 million US dollar soft loan from Korean-Exim Bank for electro-mechanical, hydro-mechanical, construction of 132 K.V transmission line and other equipments and consultants. Nepal government and Nepal Electricity Authority agreed to put 7.55 million dollars remaining budget for the project. Similarly, it was initially estimated 47.35 million dollar for civil works, land acquisition and compensation, camp construction, management, administrative and environment and engineering.

However, the recent revised cost of the project is estimated to be 158 Million US dollars due to disturbance in work, design amendment, and geological obstruction.

Under the project, 18 kilometers of road is constructed with five bridges and one cause way. Headwork, powerhouse, tunnel, tail race, land acquisition and  transmission line tower are other works of note.

Many people in far western region see this project as a gift of Korean people to people of far-western Nepal. Since Korean government supported the Chameliya Project by providing assistance to detailed engineering study and tender, the soft loan of Economic Development Cooperation Fund, Korea helped to implement the project.

It has already made drastic change in the region and after the completion of the project, it will help to make far western region as an economically potential region for industry and investment. The infrastructure built through the Korean cooperation will definitely bring drastic changes to the far west which is still a backward region.

As Nepal government has its own financial procedures to mobilise the funds, the project cost will go up by many fold in case Korean Exim Bank fails to release the required resources for the project in time.

EP DELEGATION Visit For Cause By A Correspondent 10 hours, 46 minutes ago