With funds from the European Union, PRISM has been able to enhance the works of garbage collectors 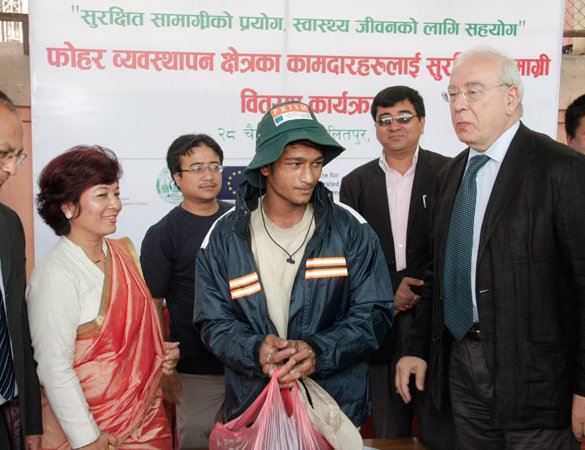 Sakhiva Khatun, who lives in a slum at the bank of Bagmati River in Teku, at the heart of capital Kathmandu, is serving the people by cleaning the garbage from different parts of the city. Although she supports the cleaning of the city without any formal job, Khatum is yet to receive any recognition or respect from the government and the public.

“All people hate us and even stray dogs bark at us. It looks like we are the most hated people in the city,” said Khatum. "I have to wake up every day at 3 in the morning to collect garbage from various parts of the city.  People often shout at us when we collect their wastes, which is very humiliating."

Sakhiya Khatun is one of many waste pickers.

Ram Pukar Das, 38, from Janakpur, has a similar story to share. We continue to clean the city but what we want is respect and good treatment. According to an estimate, there are 10,000-15,000 waste pickers and 700-800 Kabadis (waste/scrap dealers). Although these workers play a vital role in dealing with the waste generated in the Valley, the profession is considered shameful and degrading, and its contribution is unrecognized by society as well as local and state authorities.

To encourage and recognize their work, EU Ambassador to Nepal, Dr. Alexander Spachis recently gave away safety equipment to a group of waste pickers in Patan melting with them. "I am very happy to be with all of you. Like in all cities of the world, your role and duty is most important. Everybody needs to respect your work," said Spachis who distributed the safety materials for 26 informal workers and 150 formal workers with Lalitpur Municipality.

Since its inception two years ago, the project has been organizing various programs to recognize the works of waste workers by providing them safety related matter. This was the part of the program when EU ambassador to Nepal Spachis provided safety equipment to the workers.

"After implementation of the program, we have seen a lot of change in the quality of the workers," said Achyut Lunitel, Regional Director, of the Practical Action, South Asia Office.

According to a study, urban waste pickers are among the poorest people in Kathmandu valley. Most live in squatter settlements along the riverbanks. They are exposed to many health risks through unprotected handling of waste materials, and due to their poor living conditions. Working in 5 municipalities of Kathmandu valley, the overall objective of the PRISM is improving the living conditions of informal workers in the solid waste management sector.

The project targets around 4,000 waste workers, with all having an increase in health and safety leading to better health outcomes, 2,000 having increased incomes, and 1,000 having access to affordable health care and insurance. "We expect that at least 50% of beneficiaries will be women.”

Approximately 10,000 to 15,000 people in Katmandu Valley work in the solid waste management sector. Informal waste workers (IWWs) belong to the poorest of Nepali society and are highly vulnerable to health problems because of their daily contact with hazardous substances. On top of that, they are stigmatized by everyone, despite their vital contribution to the environment.  PRISM is a joint project between the European Union and the UK-based INGO Practical Action. Through workshops and campaigns PRISM tries to improve the IWWs’ perilous living conditions and attempts to raise awareness to both society and these waste workers. In one year, the project is coming to an end. But did it pay off?

The EU-funded project, which is in its second year, is being jointly implemented by Practical Action, Centre for Integrated Urban Development, Solid Waste Management and Resource Mobilization Centre of the Nepal Government and the Lalitpur Sub metropolitan city with the goals of addressing many cross cutting issues such as health, education, skills development.

The project is directly linked with the informal workers in the four major cities – Kathmandu, Lalitpur, Bhaktapur and Kirtipur and aiming at benefitting five thousand waste pickers in the Kathmandu valley. "This is a unique project to address the issues related to informal workers of solid waste," said Amrita Shakya, Director General of the Solid Waste Management and Resource Mobilization Centre. "Society needs to recognize the works they have done.”

Nabin Bikash Maharjan of the Centre for Integrated Urban Development (CIUD), implementing partner for this project, explains the necessity of the initiative, which is funded eighty per cent by the European Union. “Many things are going wrong in the solid waste management sector,” he states.

According to Maharjan, they just make enough for their day-to-day life due to a lack of bargaining skills. He emphasizes the importance of IWWs entering groups. “These people make an average wage of 200 rupees per day. They sell what they collect to a scrap owner, who will give them just enough money for the day. Most of them are unable to save.”

By way of accessing a group, PRISM teaches an IWW about programs and activities such as microfinance. Further, one of the main goals of the project is to increase the IWWs income with 30 per cent. But how will that be sustainable in the long term? “For example”, says Maharjan, “one group of 35 IWWs has set up a business plan for a plastic tearing machine.”

With objectives such as these, PRISM directly helps at least 4,000 informal waste workers in the Kathmandu Valley. A striking finding appeared during a baseline survey that almost half of the IWWs are of Indian origin. Maharjan explains why, “There is an open border between India and Nepal and Indian comes to Nepal and are likely to end up in this work.”

With these men, the awareness campaigns concerning health and safety definitely have paid off. “If we don’t wear our safety equipment, we can cut ourselves on metal or glass,” Das says. Although these youngsters enjoy their work, it is their dream to start a brick business.

Next year, the PRISM project will end. Nearly all stakeholders agree that three years won’t suffice. "At least ten years are needed for a project like this,” Sarala Shrestha says.Project Manager for Practical Action Nepal, Srijana Devkota Adhikari agrees. “There is enough money but too little time. We have already worked non-stop on this for twenty months. It took us over a year only to identify 4,000 IWWs. Slowly but surely, we are seeing the results. We piloted this project but the municipalities need to make it sustainable,” she says.

EP DELEGATION Visit For Cause By A Correspondent 11 hours, 27 minutes ago