A Pilgrimage To India

A Pilgrimage To India 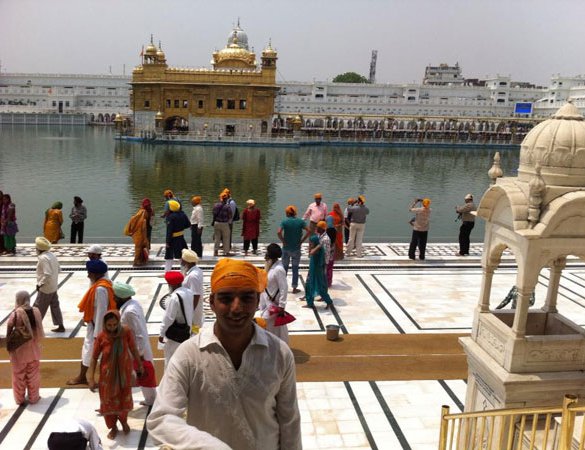 It all began with an offer I could not refuse. My Thulo Daddy (dad's elder brother) asked me if I would like to join him in a tour of India. I hesitated a bit. I was planning a job switch, to start the new work immediately. But I also needed a break. When Thulo Daddy told me I could be his guest during the journey, even before I had thought about how I would manage my finances, my hesitation was over. I agreed to give him company during his visit.

We booked the railway and flight tickets from Orient Paradise in Kathmandu. Where it was difficult to get tickets, we paid a little extra and got them. It would be a 28 days journey in total.

We flew to Bhairahawa and spent a night there. We did not want to take chances because it was a bandh season in Nepal. We had one more day to spend in Gorakhpur before boarding the train. From our past experiences we always knew that travelling in north India would not be without isolated instances of meeting unscrupulous men, but not this time. However, the conductor of the bus did not return a petty amount saying that he did not have the change. All throughout the 3 hours journey from Sounali to Gorakhpur we had understood that he did not wish to pay that amount. This was enough to upset us for some time. It wasn't the amount that mattered, but the knowledge that we were being cheated which pained.

After a little less than 60 hours of train journey we reached Ernakulam. The train journey was comfortable, but it tried our patience because of delay. Once in Ernakulam we were properly guided and briefed by the Kerala Tourist Development Corporation (KTDC) officer to find a suitable hotel and the sightseeing that was on offer.

We walked into a nearby hotel, kept our luggage and did not take rest. We went out for a boat ride to see the setting sun. The next morning we went for a boat ride again and a bit of sightseeing of Ernakulam and Kochin. We spent most of our time in Kerala in the boats.

The next stop was Alappuzha or Allepey also popularly known as the 'Venice of the East'. Lord Curzon, the then Viceroy of India had coined the term because of its waters. Alappuzha was an hour and half journey from Ernakulam. The four hours boat ride in the backwaters of Alappuzha was enchanting and tranquil. Not even for a second we felt we were bound by the waters in Kashmiri Sikara (the boat). We were taken to a local hotel situated in the bank of backwaters. We were shown the varieties of fish and we were thrilled by the sight of them. We ordered everything for lunch. However, the cook could not do justice to such fine fishes that he himself had caught in the waters just before his home cum restaurant. Even though we had negotiated the price before because the cook could not prepare the delicious looking fish we felt that we paid more for them.

Trivandrum, the capital of Kerala, was 3 hours train journey from Alappuzha. It was easy to get to Trivandrum. Trivandrum has one of the most beautiful temples, Padmaswamy temple of Lord Bishnu. The temple is magnificent in architecture and its sight is mesmerizing. We were told that uncountable amount and treasures were found in the temple. To enter the temple strict temple rules have to be obeyed.

We also flirted with the sea in Kovalam beach which is a jewel of Trivandrum. We took some time to see the setting sun form Kovalam beach despite the fact that the driver was grudging of delay.

Kanyakumari, the southernmost tip of India is another 3 hours journey from Trivandrum. Kanyakumari has Swami Vivekananda temple right in the confluence of Indian Ocean, Arabian Sea and Bay of Bengal.  Although we were promised the view of beautiful sunrise and sunset from the hotel room itself it did not happen that way. Of course we went on an auto rikshaw ride to see the sunset from the sunset point. Kanyakumari boasts of beautiful sight of both sunrise and sunset.

Madurai has a beautiful Meenakshi temple. Interestingly the temple was closed when we reached there as the idols of Lord Shiva and Goddess Parvati were being taken around the city in chariot and huge procession followed it. The day happened to be their wedding anniversary.

Rameshwaram, one of the four dhams of India and one of the 12 jyoti lingas was our destination. This whole trip happened because Thulo Daddy had been to other 3 dhams and 11 jyoti lingas and this was the last dham and jyoti linga he had to visit to complete his pilgrimage.

Rameshwaram can be reached after penetrating the sea to some length. The sight of sea on either side of the road is fascinating. Interestingly the lovely beaches of Rameshwaram have not been exploited for tourism. It took us three to four hours to reach Rameshwaram from Madurai.

On our way to Chennai from Rameshwaram we stopped at two places breaking our journey and making it comfortable. First was Tanjavur which has one of the most beautiful temples made about a thousand years ago. The other place we halted was Tiruvannamalai which has Raman Maharishi's ashram. The ashram is a meditation center and I found myself at my best and quite at home there.

Chennai, the capital of Tamilnadu, is a megacity. We got to have some of the best dishes after a long time. We were to board the train from Chennai for Delhi.

I love Delhi. With the Metro trains the city is much more accessible now even for the outsiders. Every person sitting next to us in a restaurant or Metro talked in different language reminding us how cosmopolitan the city is. Akshardham temple, which opened in 2005, is worth seeing for its architecture and grandeur.

We also went to Amristsar, which is six hours train journey from Delhi. Amritsar is located in Punjab. The sweet talking rikshaw and auto rikshaw drivers made us willingly pay them more than their service to us. The Wagha Border; the border between India and Pakistan, is a place to visit. However, to get to the parapet from where the event can be seen happening every evening, is anarchic. It looks like there is celebration every evening. The women, girls and children danced to the patriotic songs played out loud. The sentiments of India and Pakistan are reflected in the event. Amritsar is also a historic place for the fact that Jallianwala Bagh tragedy happened there. The place brings about mixed feelings of pity, anger and revenge. Finally, a must see Gurudwara, the Golden Temple, is made of gold and surrounded by water on all sides.

The diversity of India is something beyond comprehension and unparallel.

Geo-politics of the Himalayas By Binoj Basnyat 2 days, 19 hours ago

It’s A Topsy-turvy World By Hemang Dixit 3 days, 13 hours ago

Fed Up With Federalism By Deepak Raj Joshi 3 days, 13 hours ago