As Nepal is celebrating the World Environment Day 2013 on June 5, Chairperson of Save the Environment Foundation (SEF) CHANDA RANA spoke to NEW SPOTLIGHT on various environmental issues faced by the country. Excerpts: 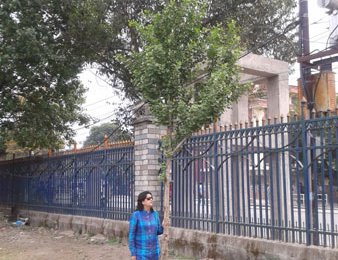 Your organization has initiated the effort to make Kathmandu City green. Can you share your experience about this initiative?

As a first organization to start the urban roadside greenery in Kathmandu, since 1994, it was a great challenge for us though we took it as a pleasure and contributed as much as we could. The vision was to beautify Kathmandu which was turning into a concrete jungle.

Starting a green belt from Tundikhel, the idea was cover Singhadurbar, Banijya bank, Tukucha belt, Min Bhawan, Babar Mahal ,  Airport road, Tribhuvan  army golf course,   Nepal  Army  HQ premises, Army pavilion,  Kharipati  barrack, and ring road side Maharjgunj. We have planted around 8,000 different species of trees. We were running this project mostly by self finance and only by some nominal contribution from local sponsors.

Can you share some real challenge you had to take up while carrying out your greening effort and special moments of seeing the trees you planted?

I felt thrilled at seeing the majestic Ginkgo Bilobas. We had planted two hundred trees inside Tundikhel, and  Army pavilion. Altogether we have planted 1,000 Ginkgoes in Kathmandu.

We were planting tiniest Salix at the Bank of Tukucha river near the Banijya Bank premises. Now you can see our beautiful Salix trees along with few Jacaranda coming up at the Singhadurbar Bridge adding beauty to the premise.

Besides making the green belt, what else did SEF do to beautify the city?

We have made “Bhadrakali Shanti Udhyan” at the Bhardrakali triangle, which was misused as venue for political protests. We worked hard to make this site free of protest, getting a ban order from the ministry. We made a green garden full of environmental messages through cut logs, with lighting provision at light, along with beautiful fountain installed, two pigeons in the middle carrying the message of peace as it was made at insurgency time. We preserved  the  statue of late king Prithvi Bikram Shah at the middle coating preserving coats which is a brilliant, priceless  piece of art and National heritage (which should be seen through the eyes of an artist or admirer) casted by world’s renowned sculptor  called Demenico Antonio  Tonelli.

We made two beautiful mini environmental parks at the south entrance of  Birendra international convention centre, installing two beautiful statues casted by renowned sculptor Thakur Prasad  Mainali.  We asked the cast as a symbol of “mother nature in trouble” due to degrading environment on earth as a message.

It broke my heart when I noticed these statues of mother nature being crushed into dust by bulldozers for road expansion and wished only it could have been saved and shifted inside the BICCI garden. I was out of Kathmandu when it happened .

We made an arboretum inside Kharipati barrack where we have planted trees from the Himalayan range, terai to valley, to show it as a mini botanical garden for our army officers, it gives us pleasure seeing those trees surviving as they were looked after well by the barrack. I was thrilled to see Ritha [local soap]   at arboretum when I visited last year. I must thank former chief of Nepal Army General  Pyar Jung Thapa for providing us the site for plantation. He was always supportive and  keen on maintaining greenery .

What is your vision about the recent protest for expansion of road ?

Save the Environment Foundation (SEF) is one of the NGO’s and we are still actively working on addressing the urban tree loss issue. We do believe in road expansion indeed, but with planned urban greenery along with saving existing trees, if possible, and if it cannot be worked out, we strongly take there is always some option such as “plantation  of appropriate fast growing or already grown up trees at the expanded roadside.”

What is your main project right now?

Personally I am fighting a lone battle to preserve the Chitwan National Park from the most notorious weed called mikania micrantha, which has already wiped out 20% of the greens, along with trees and grassland, and is posing a serious threat to one horned rhinos, habitats, food and shelter. I have already made a documentary and I am making another documentary on it too as some option identified on the issue to preserve the Chitwan National Park.  The objective is to highlight the need for collective approach to tackle the problems. I am contributing from my personal  resources as a contribution to Preserve the Nature for Future Generations.