Leprosy: Down, Not Out

Even though there is a cure, a fear of oppression of the infected exists here in Nepal 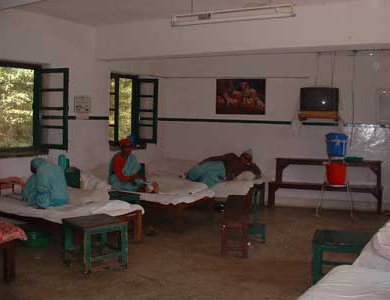 Leprosy is a dreadful disease, which, besides maiming and killing its victim, has long carried with it a social stigma and isolation. Leprosy causes immense and permanent damage to the nerves, scars the skin, and weakens the muscles. Decades ago, it was incurable and infected patients were treated horribly. Today, though it still exists, there is a cure.

Leprosy, also known as Hansen’s disease, is a chronic illness caused by Mycobacterium leprae. Although not easily transferred, it is a frightening disease. One can get cured through the multi-drug therapy, which is easy and cheap. However, once a limb is lost through leprosy, it’s gone forever.

Leprosy is often called the disease of poverty, and poverty is in abundance in Nepal. Today, many organizations help prevent and cure leprosy, before it gets out of hand. However, years ago, leprosy was thought of as an evil disease. They’ve slowly begun to reduce the stigma and avoid ‘leper colonies’. Anandaban Hospital (Leprosy Mission Nepal) is one of them. Founded by the Leprosy Mission International in 1957, it serves as the main ‘leprosy referral hospital’ in Nepal. Located in Laltipur, it has already cured hundreds of people. According to Anandaban Hospital, in 2003, there were only 17 serious cases of leprosy and this number has since gone down. In 2003, 226 major and 217 minor leprosy related operations were done at the Anandaban hospital.

Some believe that an upsurge is taking place; others say that it is impossible. One thing is for sure, leprosy still exists today. In 2010, the Nepal Leprosy Trust found 225,000 new cases worldwide. A majority of the 225,000 were thought to be in the Indian/Nepali region and the 10% of the diagnosed were children.

The disease may be difficult, but the cure has become easy. However, there is a large amount of humiliation and isolation that the disease-ridden must face in Nepal and India.  Ram Sharma, an 86-year-old resident of Chitwan now in Kathmandu, remembers, “Leprosy is a horrible disease. As kids, we were forbidden to even go near an individual suffering from the disease.  It used to be scary and it would eat up your body. However, it is curable now and the medicines are accessible to everyone.”

Throughout history, there has been a stigma shadowing leprosy. People affected with the disease were secluded and placed in ‘leper colonies’. These colonies were a place to quarantine the affected. These people were placed in colonies that were isolated and far away from the rest of the population. Thus, leprosy not only led to physical disability, but also mental and emotional trauma. In India, there were more than 1,000 leper colonies a littler over a decade ago.

Cases of leprosy are not as common today as they were in the distant past. That does not mean we assume that it is going the way of the small pox, that is, toward eradication. Such diseases can reemerge, often in a stronger form having developed resistance to many drugs. Health authorities must keep in mind that, like drug resistant Tuberculosis, Leprosy can pose a formidable challenge they can well do without.

VOLUNTEERING Israeli Way By A Correspondent 1 week, 1 day ago

FCNA Federal Chart By A Correspondent 1 week, 2 days ago

HOLOCAUST REMEMBERANCE Humanity Matters By A Correspondent 1 week, 3 days ago

Diplomacy Changing Guard By A Correspondent 1 month, 2 weeks ago