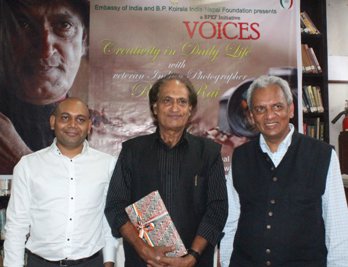 Raghu Rai started the talk “Creativity in Daily Life” by bringing together his life and career, his dreams and aspirations, his beliefs and the cultural values of countries like Nepal and India. He enunciated further on how every photographer or a photojournalist irrespective of the geographical, cultural and other differences have to spiritually connect themselves while they are on their field to shoot.

“A one who takes the photograph and calls himself a photographer cannot limit himself into a genre, time zone or geography,” said the ace photographer of India who started his career in 1965 as a photographer and is the recipient of the coveted Padmashri award.

During the event, ambassador of India to Nepal, Jayant Prasad also shared about the invaluable contribution of Raghu Rai to Indian media and to the world at large.

Raghu Rai later invited questions from the audience that highlighted further Raghu Rai’s life on his canvases and beyond, his journey to photography as a profession and the ethics and practicality of the profession.

Raghu Rai, who has authored approximately 36 books and more of such in pipeline, was invited to Kathmandu by the Embassy of India and B.P. Koirala India-Nepal Foundation to chair the jury of Nepal Photo-Contest 069, an annual photo competition organized by Photojournalist Club of Nepal. Rai had earlier had a discourse with the photojournalists of Nepal at Nepal Tourism Board on Friday morning.

Some of Raghu Rai’s works:

He has produced more than 36 books, including Raghu Rai’s Delhi, The Sikhs, Calcutta,Khajuraho, Taj Mahal, Tibet in Exile, India, and Mother Teresa. For Greenpeace, he has also completed an in-depth documentary project on the chemical disaster at Bhopal in 1984, and on its ongoing effects on the lives of gas victims. He is recipient of many national and international awards. His works were exhibited in London, Paris, New York, Hamburg, Prague, Tokyo, Zurich and Sydney. His photo essays have appeared in many of the world’s leading magazines and newspapers including "Time", "Life", "GEO", "The New York Times", "Sunday Times", "Newsweek", "The Independent," and the "New Yorker". Besides this, he was also served three times as a jury of the World Press Photo and twice of UNESCO's International Photo Contest.

Examinations In Universities Will Held Soon By NEW SPOTLIGHT ONLINE 1 day, 20 hours ago

EU And UNICEF Join To Prevent Malnutrition in Children During COVID-19 Crisis By NEW SPOTLIGHT ONLINE 2 days, 20 hours ago