After the implementation of the Early Warning System by the Practical Action, human casualties and loss of movable property have drastically declined in the mid-western and central regions 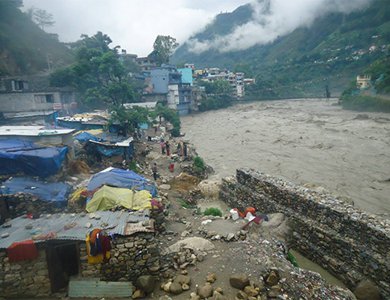 Timely information about the state of rivers can save the life of hundreds of people and property worth of billions rupees annually. This is what Practical Action's Early Warning System showed in the far-western and mid-western regions.

Unlike in the past, farmers of Banke and Bardiya districts avoided the damage of movable property and human casualties this year. Although floods in Karnali River and West Rapti smashed farmlands, people and their property were safe. However, the rain and flood in Mahakali River and its tributaries devastated life of people and damaged property worth millions of rupees.

The rain and flood of June 17 and 18 caused heavy losses in far western and mid western regions. Six hundred and seventy one families of six districts of far-west have been completely displaced by the recent floods and landslides.

Although the scale of project and program is small, the early warning system introduced by Practical Action has contained the damage of movable property and saved the life of the people. Despite record floods in Karnali River, there was no casualty in Bardiya district.

"The flood in Karnali River was record high on 15 and 16 June or highest in the last 35 years. Since we provided information about the level of water and alerted people through our system, there was no human casualty and loss of movable property," said Dina Nath Bhandari, program coordinator for DRR and Climate Change.

With support from Practical Action, local people installed early warning system in Karnali, Babai, West Rapti, Narayani and Eastern Rapti. "I am happy to say that the ownership is now taken by local government and community. Proper use of Early Warning System can reduce human casualty and movable property. Even last year, there was nominal damage in Banke despite heavy flood in western Rapti."

With support from Practical Action, a web based telemetry system for real time monitoring of water levels and rainfalls and community based warning dissemination and an immediate response mechanism have also been set up in East Rapti, Narayani, West Rapti and Karnali basins.

To alert the concerned officials, an automated alert system has been set up at the office of the District Disaster Relief Committee of West Rapti basin which triggers the siren attached to the electronic display board automatically when the river level reaches the warning mark. The inundation maps prepared for different flood levels are used to issue warning to the specific location. These maps have also been used to identify the safe areas for shelter and the escape route. The flood danger level information could also be used for land use planning at the town and village level. This approach of flood warning has been found simple, fast, reliable and cost effective.

Experts argue that generating the level of awareness and providing proper information through right channel is the way for Nepal's longer term solution. "Although the early warning system is just limited in a few selected areas, it can be expanded as the cost involved in it is much lower than the cost involved in rescue and rehabilitation," said Bhandari

Although the Department of Hydrology and Meteorology monitors the water level in 18 major rivers, only five rivers have an effective early warning system. Once the river water crosses the water level, warning is issued through various channels.

"Flood is natural and we cannot save the crops, but we can save the people," said Bhandari.

As the system links with National Emergency Operation Center at Ministry of Home, it can coordinate between districts and center on flood related disasters. Once the warning is communicated to the center, it directs concerned officials to take necessary action.

Home Ministry officials are now focusing their attention on early warning system to prevent the loss from disaster. "The government will replicate the successful model of early warning system in other places also," Home Minister Madhav Prasad Ghimire told New Spotlight. "This is much cheaper than rescue and rehabilitation."

Community based flood early warning system has been set up in the Divyapuri and Pragatinagar, Nawalparasi, Narayani and East Rapti, Meghauli, Chitwan, Patihani, Chitwan, West Rapti in Banke and Bardia. For the Flood Early Warning Dissemination System, and Community based System for effectively disseminating flood warning information to the communities, various agencies are responsible for disaster management and district level authorities. The system has been set up in collaboration with District Disaster Relief Committee with technical and financial support from Practical Action.

Although annually government and Nepal's major international donor agencies spend a huge amount of money for rescue and rehabilitation, the experiences of Practical Action have shown that nominal amount of money can change the situation.

Locusts Reached To 26 Districts In Nepal, Destroyed The Crops By NEW SPOTLIGHT ONLINE 3 days, 19 hours ago