Although he stayed just 9 hours in Nepal, Indian Minister of External Affairs Salman Khurshid has made it clear that India is concerned about its core interests in Nepal 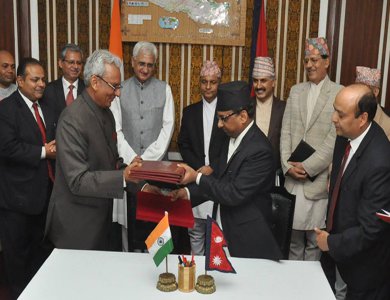 After his meeting with chairman Regmi, a Memorandum of Understanding was signed to provide 764 vehicles for the upcoming Constituent Assembly election. Finance Secretary Shantaraj Subedi and Indian envoy Jayanta Prasad signed the MoU at Singhadurbar. Of the total 764 vehicles, 716 will be provided to security bodies while the remaining 48 for the Election Commission. India had also donated 500 vehicles to Nepal in the 2008 CA polls.

Before wrapping up his one day-visit, External Affairs Minister Salman Khurshid said, "There is determination among all political parties in Nepal that election must be held in time and any difficulties that comes on the way must be removed through consensus."  "We are happy to provide any assistance we have been asked on the basis of need of the people and the consensus among the political parties," Khurshid said.

"India remains strongly committed to the success of Nepal's peace process and institutionalization of democracy in Nepal in a constitutional and multiparty framework," he said. "India was totally committed to supporting the forthcoming election and was ready to provide all kinds of assistance for the purpose for consolidating democracy," Singh said after his meeting with Khurshid.

According to the press release of Indian Embassy, the Indian external affairs minister exchanged views on further development of bilateral relations and other issues of mutual interest. Some projects, which are under discussion at various levels between Nepal, were also discussed.

"The visit shows that there is strong international support, particularly from our neighbors, towards Nepal's election process," said Arjun Bahadur Thapa, spokesperson and joint secretary at the Ministry of Foreign Affairs.

Since the signing of the 12-point agreement, India has continued to play a key role in Nepal. Despite India's heavy presence, China’s influence in Nepal also remains there. Even Maoists, who earlier projected themselves as a force to contain Chinese influence in Nepal, failed to undo Nepal’s reality.

Known for his close links with Indian officialdom, Ram Karki, who is now the foreign department chief of Nepal's UCPN (Maoist) party, expressed displeasure for Khurshid's visit to Nepal justifying his strong criticism against the recent visit of Chinese State Councilor Yang Jiechi.

"We must welcome the guest, but at a time when we are in a deep political stalemate, it would be good if the close neighbors keep away from our internal affairs," Karki said.

At a time when India's external affairs minister Khurshid was visiting Nepal, CPN-Maoist Chairman Mohan Baidya and Vice-chairman CP Gajurel left for China. A party source said that the duo left for Beijing on a five-day visit on the invitation of the Communist Party of China (CPC). During their stay in China, the leaders are expected to meet prominent leaders of Chinese Communist Party.  Although the visit was made at a crucial time, China, which always pursues peace and stability, will persuade Maoist leaders to join the elections. “It’s a party-level visit. Chairman Baidya will hold talks with senior leaders of the Chinese communist party,” said CPN-M Secretary Netra Bikram Chand.

Although India’s veteran journalist Girilala Jain wrote in his book in 1959, India meets China in Nepal, his description presenting Nepal’s reality has not changed. The Indian journalist recounts events in Nepal where Democratic India competes with Communist China in political and economic influence.