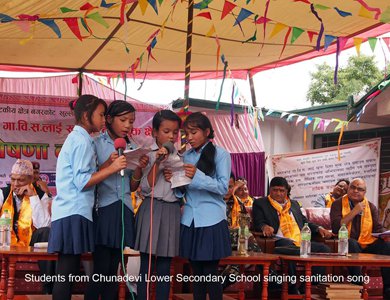 “Initially, I always think for myself what is open defection, the open defection. I feel, don’t we Nepalis do it? After learning, reading and understanding, I come to know that this is like a big university,” writes Ashutosh Tiwari, country representative of WaterAid-Nepal in his Facebook wall. “In Nepal it is interesting to discuss on big development issues. Now-a-day, I come to realize that only after completing the small scale development, we can go for big development.”

Tiwari’s comments seem simple but they have a lot of meaning. Known as touristic heaven, even the villages like Nagarkot have problems related to open defection. What might the other rural villages have in store?

As other people think, making certain areas open defection free zones is not easy as it involves many things.

Organizations, like the Village Development Committees (VDCs) are taking the initiative to create a change. The most recent effort in developing a cleaner environment was taken by the Nagarkot VDC on the 5th of July 2013, whenthey declared Nagarkot to be an open defecation free zone.

Fast-forward four months, there are 249 toilets and 3 public latrines in the area. The latrines are located in the Home stay area, the tourism development board, and the health post. Students also have access to these latrines. There is an additional latrine being planned at the bus park. The streets are cleaner, and the environment is safer.

Open defection leads to a polluted, at times, hazardous environment. The nature degrades, and creates public health threats. By the 21st of October 2013, 10 VDCs are to be declared so.

Rajeshwori Sharma Lamsal, District Public Health Office and Health Post in charge said, “We used [to have] a lot of cases of water borne diseases: Amoebic Dysentery, Diarrhea, Typhoid, Jaundice, and Cholera being the major ones. However, since the past few months these cases have decreased.” By setting up toilets in rural areas, open defecation will decrease, and in time, won’t exist. This will cause a reduction in illnesses and sanitary health ailments.”

WHO Advice For International Traffic In Relation To The Outbreak Of The Novel Coronavirus 2019-nCoV By NEW SPOTLIGHT ONLINE 5 hours, 51 minutes ago

Nepal Detects First Case of Corona Virus, 3 Others Suspected Are Under Observations By NEW SPOTLIGHT ONLINE 2 days, 5 hours ago