Badi women: is there a life beyond prostitution?

Badi women: is there a life beyond prostitution? 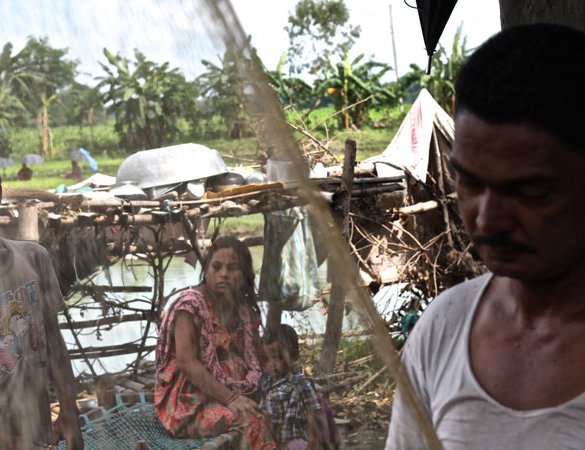 In 2007 dozens of Badi women travelled from the Mid and Far Western regions of the country to Kathmandu. An army of partly undressed women received national attention as they sought government help to lower longstanding economic and social barriers.  The ‘Badi Andolan’ resulted in a number of agreements with the interim-Government promising to end the use of discriminatory terms, provide citizenship to all Badis, scholarships for their children, access to healthcare and employment opportunities. For many Badi women, this meant coming up with alternatives to prostitution.  But six years after the agreements, has the socio-economic status of their community improved?

Babi Badi, 33, thought her days of prostitution were over. Despite government rhetoric about welfare schemes for the Badi community, she still awaits programmes that address her issues. Single mother and partially blind, she reveals that she has barely received any support. "I started working as a prostitute when I was very young encouraged by my mother. Men were coming and going, I don't even know who my son's father is. Employment opportunities are scarce here and it is increasingly hard for us to make ends meet," Babi explains.

Mothers play a major role in initiating their daughters into prostitution. In the beginning, they often offer the services of their own daughters to prospective clients, and personally handle the bargaining. The UN associates the increase in sex trade within the Badi community to the emergence of radio and television which drastically reduced the demand for their traditional forms of entertainment. "To compensate for this sudden loss in livelihood a number of Badi women began to prostitute themselves to the wider public, encouraged by increasing demand from a rapidly growing population in the Tarai districts," UN affirms.

Although prostitution is considered illegal in Nepal, the traditional lifestyle of the Badi community has not changed much. At night, as we walk through some of the so-called former prostitution hubs in Kailali, it becomes clear that few women have vowed to refrain the flesh trade. Currently almost forty thousand Badi live in Nepal, the majority in the Tarai districts, but prostitution seems particularly widespread in 'highway towns'. Every day as the sun goes down, transport workers in particular, come looking for commercial sex workers. Several Badi women interviewed in Muda Bazaar along the Mahendra Highway openly shared that they were involved in prostitution.

Lack of alternative livelihoods combined to the hierarchy inherent in the Badi community itself, makes it difficult for most women to upgrade their socio-economic status. "We started working as prostitutes because we had to feed our families. Now that it is illegal most of our daughters go to India. The government is building houses for some members of the community but we are still waiting for our turn," Phulmati Badi, 54, reveals. Phulmati, a former prostitute, has married twice and is often victim of domestic violence. She now takes care of her granddaughter as her daughter, Sapana, currently resides in Punjab, India.

In Bisnukantipur, a Badi settlement devastated by recent flooding, lack of landownership means that most Badi men migrate in search of employment to India or to other parts of Nepal, while the women stay behind. Badi women are affected by discriminatory practices and social stigma due to their perceived association with prostitution, but what about who is standing on the 'other side of the counter'? What about the customers? How can we stop the vicious cycle? Prostitution is all about supply and demand. Demand for illicit sex is so strong that it may be the only consumer product that thrives without really being advertised. Prostitution pays well, consequently the government instead of simply building an agglomeration of houses should create sustainable alternatives by placing greater emphasis on creating employment opportunities.

Abruzzini is a journalist from Italy who writes for various European and South Asian newspapers. (bibbi32@hotmail.com)

Nepal's Over Dependency And Sluggish Development By Hari Prasad Shrestha 9 hours, 9 minutes ago

Nepal Is Bearing The Disproportionate Burden Of Climate Change By BHARAT RAJ PAUDYAL 3 days, 13 hours ago

Refugees In Nepal: Recognition And Inclusion By Deepesh Das Shrestha 6 days, 8 hours ago