A Place For Tolerance 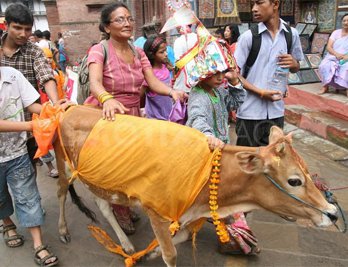 There is a place in Kathmandu that gives a peculiar vantage to see life. To take the benefit from that fascinating, awe-inspiring feeling which scrambles your thoughts, you have to explore the first waves of visitors here during the fresh and quiet early hours of a pale cloudy morning. Coming into the temple premises, you get the striking sensation as if you are entering an out-of-time dimension, full of smells and music rhythms. Even so, the atmosphere remains weirdly peaceful.

A cremation is occurring on the western river bank. Smoke will uplift soon towards the dazzling white sky. Nearby a body is prepared; last blessing from the living, last flowers laid on the chest. Here people who endure pain and sorrow find reciprocal sentiments whilst meeting the eyes of relatives, from other families, who lost someone as well.

With more than 80 per cent of Nepalese asserting to be Hindus, existence of such an amazing place as Pashupatinath to celebrate the last time for the cherished person does not appear surprising.

In India, unlike Hinduism was strengthened by it, Buddhism gradually came to decline and later disappeared. On the contrary, Nepalese Hinduism has sustainably embedded Buddhism by integrating Buddha as one of the great divinities descendant from Vishnu, protector of the world. Syncretism between Hinduism and Buddhism is also observed on the Buddhist side. Saraswati Mandir, in the village of Pharping well known for its followers of Tibetan Buddhism, perfectly outlines that religious mix. The temple hosts Tara, worshipped deity by both Buddhists and Hindus, that embodies for the former, a virtuous female bodhisattva, and for the latter, a beautiful goddess of great wisdom. It is said that the tradition of religious tolerance had started with King Manadeva visiting both Buddhist and Hindu sites in the 5th century. In more recent times, Newar people were an important vector of syncretism to combine Hindu and Buddhist arts. In fact syncretism has been developing since the very birth of Buddhism. Buddanath was born in Shakya, Kingdom of Kapilvastu (Lumbini area), before he went to India where it is believed he found Enlightenment.

Yet, while the Nepalese people are almost exclusively Hindu, does contemporary syncretism truly entail a genuine commitment from all religious communities to respect the thought of others? In other words, is religious syncretism in Nepal sincere tolerance or superficial status quo?

Regarding Buddhism of all shades, similar principles tend to consider tolerance as something of the utmost importance. One of the first statements written in the Dalaï Lama's Introduction to Buddhism and Tantric Meditation mentions the "urgent need for flawless unity among all religions.” How, could we ask. "[by knowing] something of the religion of others," then he adds, the most common goal in Buddhism which brings about some certainty in the degree of tolerance is probably the quest for Enlightenment, assuming equal condition for all human beings. "Living beings desire peace and happiness and want to avoid sufferings," he says later.

Hindus seem to have embraced that purpose in their praxis. What a best first step to know bliss than punctual demonstrations of "enlightenment of sympathy"? Borrowed from the American philosopher Michael Frazer, the phrase matches as well with political theory as with practice. Nepalese Hindu festivals stake out well forms that such enlightenment can draw. They celebrate life in a musical and colorful way without excluding anyone. During the Gaura Parva day, women worship Hindu deities for longevity and prosperity of their family whereas during Janai Purnima men have to take a bath before praying likewise. August celebrations reach a paroxysm on Gai Jatra, ironically the day when people who passed away are celebrated with humor and joy. Spotters are invited to become active participants. Tolerance amid human beings meet tolerance between living beings and those who passed away, who now found path to another world.

Religious festivals apparently do what politics has failed to achieve in Nepal: gathering and enabling everyone to participate without any other interest than happily sharing all together. Those kinds of festivals have succeeded to set up the most universal belief throughout the world, the belief in the need of peace and happiness for human kind.

Lala is an intern from France

Nepal's Over Dependency And Sluggish Development By Hari Prasad Shrestha 8 hours, 12 minutes ago

Nepal Is Bearing The Disproportionate Burden Of Climate Change By BHARAT RAJ PAUDYAL 3 days, 12 hours ago