After the break-up of the negotiation between the High Level Political Committee and the CPN-Maoist led alliance, more confrontations are likely on the political course of the nation 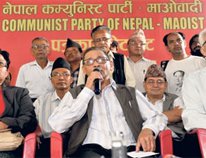 For a political analyst, dramatic political turns are nothing new in Nepalese politics. The break-up of the recent negotiations may lead to further confrontation. Given Nepal’s political history, more predictable is the continuation of the political instability.

Although the wind is now blowing more in favor of the November 19 election, anything can happen to avert it until the last minute. The political situation took a new turn last week when the High Level Political Committee accepted the demand of CPN-Maoist led 33 parties to call an all-party roundtable. However, the talks broke down suddenly on Saturday (24 August).

Political confrontation has intensified following break-up of the negotiations and the country is now heading towards more violence in politics. CPN-Maoist led alliance has already called on its cadres nationwide to disrupt the elections. The four political parties have ordered their party cadres to retaliate against CPN-Maoist. The government has also ordered its security agencies to remain vigilant against any violent activities of the CPN-Maoist led alliance. It is likely, therefore, that the November 19 polls will see violence at a time when Nepal’s political situation is at the crossroads.

Chairman of the Interim Election Council of Ministers Khil Raj Regmi has reacted strongly against the agreement reached between the High Level Political Committee and CPN-Maoist led 33 party alliance on 22 August. Soon after the agreement, Regmi met president Dr. Ram Baran Yadav and briefed him on the likely political scenario of the all party roundtable meeting. Chairman Regmi reportedly threatened before President Dr. Yadav that he will hand over rein of power to Nepal Army in case of failure to hold the election on November 19 and will return to the Supreme Court.

Regmi’s anger is understandable as he will be likely to face a major constitutional crisis in case of failing to hold the elections on November 19. After November 19, the government’s legitimacy will come to an end. After consultation with Regmi, President Dr.Yadav sent his messenger to the houses of four party leaders asking them to stick to November 19 elections and revoke their decision to hold all party round table meeting. This pressure changed the whole political scenario and four major political parties broke negotiations with CPN-Maoist led 33 party alliance, and retracted from their earlier stand to summon all party roundtable meeting.

The next round of political battle will be more crucial and decisive. As the Election Commission has already moved in line with its election calendar and major political parties are in the process of selecting candidates, chances for  November 19 elections are likely to be high. As the negotiations broke down, CPN-Maoist led alliance is likely to come aggressively to disturb the polls. The election preparation will face more hurdles and resistance.

However, the postponement of elections cannot be ruled out as the major parties in the HLPC have decided to keep the door for talks open should the agitating alliance agree to participate in the November poll under the existing government. As Maoist led 33 party alliance has already held two rounds of talks with government, the Maoist led alliance is likely to give in writing to HLPC to accept the legitimacy of the present interim government and to participate in the elections provided the elections date is postponed till April 2014. In this case, even Chairman Regmi will feel secure about his future role.

Create a 585-member CA with a provision for electing 58 percent of the members under the proportional electoral system and 42 percent under the first-past-the-post (FPTP) system. As per the ratio agreed, there will be a total of 335 CA members elected under the PR system and 240 under FPTP.  The remaining 10 members will be nominated by the cabinet. As per the agreement, the EC gave a one-week window period for voter registration.

As negotiations with various political parties continue, major political parties have already been in the election campaign. UCPN-Maoist, Nepali Congress, CPN-UML and Madhes parties are gearing up for polls after recent deal with Yadav led group. All the top leaders of those parties are now concentrating their efforts in Terai. As part of its decision to gear up the campaign for the upcoming Constituent Assembly (CA) election, the Nepali Congress (NC) has directed all its 75 district committees to recommend names for candidates for each election constituency in their respective districts, along with other suggestions, by September 5.

As the election date is coming closer, the government is now finalizing the integrated security plan for the November polls. Home secretary Navin Prakash Ghimire told this subscribe that the draft of the security plan is almost complete and the committee is likely to submit the proposed plan to election commission next week. The role of Nepal Army in the coming elections is yet to be clear as security committee is working to find the role for Nepal Army during the elections. Ministry’s officials said they are now more focusing on deployment of Nepal Police, Armed Police and temporary police. As per the demand of Nepal Police and Armed Police, the process of recruiting for more than 15,000 vacant positions has already begun. Nepal Police will be given the role of protecting the polling booths and Armed Police will be in striking range. Nepal Army’s role will be to provide necessary logistics.

Although many hurdles for November 19 elections have already been cleared, it is still uncertain whether elections can be held or postponed given the threat issued by Maoists and a coalition of 19 armed groups of terai.

POLITICS Uncertain Future By A Correspondent 2 days, 9 hours ago