ADOLESANTS AND YOUTH: Voice Of Note

Although Nepal’s over 20 percent of population are below the age of 25, their voices are yet to be heard by the policy makers 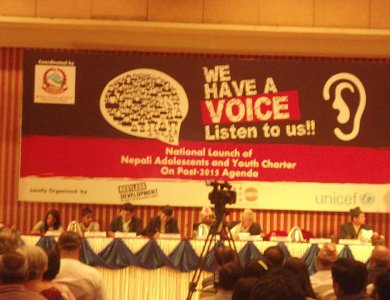 Despite waiting for a long time to see favorable polices from the government, adolescents and youth of Nepal finally decided to do something for them: bringing Nepali Adolescents and Youth Charter for the Post 2015 agenda.

Prepared by the adolescents and youth after a consultation, the youth of Nepal handed over the Nepali Adolescents and Youth Charter for the Post 2015 agenda to vice chairman of National Planning Commission Dr. Rabindra Shakya amid a function. The charter is an official document accepted by the government of Nepal. It serves the purpose of providing a strategic framework and direction for their meaningful participation, empowerment and development activities at local, regional and national levels across Nepal in the upcoming development framework that follows the MDGs beyond year 2015.

The charter document was prepared after a series of district and regional level consultations among the youth. The consultation was held in 16 districts of five development regions.  The initiative was coordinated by Ministry of Youth and Sports, with technical and financial support from UNFPA and UNICEF. The whole process was facilitated by Restless Development Nepal and other civil society organizations.

Addressing the national launch event, vice chairman of National Planning Commission Dr.Rabindra Shakya assured the adolescents and youth that the government will take care of the concerns of the children. Minister for Youth and Sports Ram Kumar Shrestha said the government will provide much needed support to the youth. “Youth are the future and youth are the present,” said Minister Shrestha.

The consultation was conducted from mid July-mid August 2013, led by a team of 13 young facilitators. “Around 500 adolescents and youth from more than 41 of Nepal’s 75 districts participated in the consultations, representing various age, sex, ethnicity, socio-economic, religious and geographical backgrounds,” said Amrit Dhakal, a young participant of the consultation.

Despite certain achievements, majority of Nepalese adolescents and young people continue to face challenges including exclusion in the main process. Their voices are unheard and ignored. “This charter represents the voice of the people. Restless Development is happy to work to prepare the charter,” saidRabindra Shakya, country director of Restless Development, an INGO working in the areas of young people.

Hanaa Singer, Country Representative of UNICEF, stressed the need to address the problems of youth. Secretary at the Ministry of Youth and Sports Hari Prasad Nepal expressed his commitment to the charter. Joint secretary of Ministry of Women, Children and Social Welfare Upendra Adhikary also spoke on the occasion.

Nepal Airlines Plane Took Off For Brisbane With Stranded Australians And New Zealanders By NEW SPOTLIGHT ONLINE 2 days, 5 hours ago

The Local Effects And Security Response To Coronavirus By Binoj Basnyat 3 days, 12 hours ago