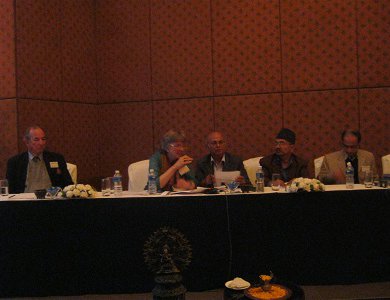 At a time when the local people at Lo Manthang, an ancient mountain kingdom located in Upper Mustang, are concerned about the existence of their homeland once the area is enlisted as a World Culture Heritage site, a group of international experts and local stakeholders have gathered and discussed various ways to address the people’s development aspirations and preservation needs for the place of cultural and historical importance.

HimalAsia Foundation, Department of Archaeology of Nepal, Kathmandu University and UNESCO office in Kathmandu organized the event with support from Oriental Cultural Heritage Protection Alliance, Paris, France, International Symposium on Safeguarding Lo Manthang and Cultural Landscape of Upper Mustang as a first-of-its-kind. Different stakeholders shared their views and highlighted the importance of conservation of Lo Manthang.

The international conference intended to foster dialogue among representatives of the communities living in and around Lo Manthang with other stakeholders including scholars, researchers and interested academics, in an exploration of its unique heritage and harnessing of sustainable development ways.

Local stakeholders, international experts and government authorities shared their views on the need for preservation of the unique heritage of Lo Manthang. However, the local people showed a bigger concern for their own development needs and argued that they wanted preservation that gave them development.

The two-day international symposium on Safeguarding Lo Manthang and the Cultural Landscape of Upper Mustang brought together renowned experts to assess the outstanding cultural, spiritual and natural values of the city and cultures surrounding it.

Although various factors are increasingly threatening the values of Upper Mustang, preservationists expressed their serious concern over the construction of road through Upper Mustang that will soon be completed. Experts held the view that the new infrastructure will make a considerable impact on the efforts to protect this ancient landscape and it will precipitate significant cultural change and social transformation. Roads are likely to make it much easier for the local people to visit different sites and more remote locations, but this intervention will also bring many influences from outside with unforeseeable results.

In 2008, the Nepal government had included Lo Manthang, the famous earthern-walled capital located at an altitude of around 3,900 meters above the sea level, in the tentative list for World Culture Heritage designation. After this initiative, the uniqueness and the vibrant cultural traditions of the old capital have been accorded official recognition.

“The conference helped national and international experts and a range of stakeholders to focus on various issues, including possibilities for supporting the local communities of Upper Mustang in keeping a healthy balance between all the challenges and managing precious heritage for the future in the best possible way,” said Susanne von dier Heide, director Himal/Asia Foundation, Germany/Nepal. “This is the right time to discuss the issue.”

There are differences of opinion among the stakeholders. International and national experts pursue the idea of preservation of ancient landscape at the cost of development. However, local want preservation to go alongside development of the region.

Local people held the view that once the site is declared a world heritage site, the authorities would curtail their access to the place and restrict development works necessary for improving their livelihood. They also stressed the need to have connectivity by road. “We want preservation of heritage as well as improvement in our livelihood. We don’t have any objection if cultural preservation is made looking at the livelihood of the people,” said Indra Dhara Bista, Annapurna Conservation Area Project (ACAP) Cultural Heritage Conservation Sub-committee Lo, Upper Mustang. “Declaration of World Heritage site  would affect the livelihood of local communities who are dependent on Lo Manthang and surrounding cultural landscape.”

Local people held the view that that once the site is declared a world heritage site, the authorities concerned would limit their access to the place and restrict other permitted development works necessary for improving their livelihood. A large number of local people depend on trade and agriculture for their livelihood, and run shops connected with the earthen-wall surrounding of Lo Manthang.

At the function inaugurated in the presence of Jigme Shinge Palbar Bista, Gyalchung, of the former Kingdom of Lo Manthang, Upper Mustang, head of UNESCO office Axel Plathe said organizing this kind of international symposium is timely.

”Our efforts must be sincerely directed to conservation and preservation of cultural sites in Lo Manthang. We also need to listen to the voice of local stakeholders on the issue of their own development,” said former King Bista.

Others too expressed concern. “We fear that once the site makes it to the list, locals’ development needs, including better education and  health, will be dominated by the conservation efforts of artifacts in the area,” said Tsewang Bista, Lo-Gyalpo Jigme Foundation, Upper Mustang Nepal.

Since 2008, various organisations and experts have been involved in the restoration of temples, research and excavation of prehistoric caves in the area. Roland Lin Chih-Hung, a representative from the UNESCO World Heritage Centre in France, said it is not possible to work in isolation, without consulting the communities for the sustainable development of the particular site. “Regarding the decision about listing it as a world heritage site, it is still a long way to go and local people’s concerns would be taken into consideration during the process,” he added.

The message of the two-day symposium was that sustainable development of Lo Manthang is possible only through a mutual dialogue between the locals and the conservationists. The key is balance.

NEPAL-INDIA Bonds Across Border By Keshab Poudel 1 day, 5 hours ago

India Open To Engaging With Nepal In An Environment Of Trust And Confidence: MEA Spokesperson By NEW SPOTLIGHT ONLINE 2 days, 16 hours ago