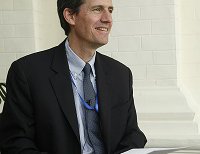 How do you view the SACOSAN-V?

The evolution of SACOSAN is very significant in a number of ways. The first thing is that the governments are in the center stage in each of the country and the head of the delegation are in the centre stage of the process in leading most of the sessions, driving the agenda, advancing how to address the serious issues of sanitation and hygiene throughout the region. In many other parts of the world, sanitation conferences of this kind have not reached in that level. That was the case with SACOSAN ten years ago where external support agencies quickly or essentially were doing a lot of drafting, working behind the scene and in many cases taking a frontal representational role, telling the agenda which was perhaps helpful in the beginning in terms of consultations. But, it is not healthy for sustainability as each country has to take the responsibility and ownership of the process and then the full fledged ownership.

How do you view the role of the civil society in SACOSAN?

SACOSAN historically had separate civil society forums which took place outside of the conference. Essentially that reflected on the part of non-governmental organization, various associations, and women groups and in some cases associations or federations which were coming from different countries and regions. They had to have separate stages where they could talk on their own issue and tried to inform the debate taking place in subsequent places, between government and international organizations.

What is the level of their participation?

People coming from non-governmental organizations and social movements of various kinds are in different panels and they have had active participation and they have dedicated events and side events throughout the course. Of course, this is not perfect. But what I can say is that SACOSAN is no more a heavily government-dominated program or that the people outside the government are silent.

How do you look at the level of understanding?

The level of understanding about behavior change, the community based approach and the role of non-state actors in the implementation of national program of sanitation and hygiene are regarded as agreed upon approaches and common set of approaches and many other sub-regions were struggling for SACOSAN itself ten years ago, these are three broader areas where one can see the changes in the last one decade.

What challenges are there before Nepal?

Nepal has a unique challenge in terai districts along the belt with India. What is encouraging is that the government has really decided to make it high priority. They have a national campaign for elimination of open defecation in the country by 2018. They have a number of initiatives and they have been pushing for this. They have also a number of commitments to make the resources at the local government level and they have structures of national, regional, district and village WASH coordinating committees. There are a lot of things taking place to meet the 2018 target.

What is your impression on the current programs?

There are certain regions of the country where it is hard to reach. Due to cultural, social-historical, political reasons, disparities have existed. There are significant numbers of population needing to be made as a priority in order to achieve the national target. I think the government gets that. They have decided to emphasize that they need to focus their energy in terai districts.

Why are the terai's programs important?

Without addressing the problems in terai, Nepal cannot achieve the national target of universal coverage. Nepal government is sending the right signal that they are committed to their goal. Numbers of external development agencies have rallied behind the government as the government is leading the process as we don’t want to say what they want to do.

How do you view the role of donor communities?

External agencies are providing support to government and non-governmental organizations under a decentralized approach. There is an enormous support pouring in to Nepal through agencies like Water Supply and Sanitation Collaboration Council, and UNICEF. We had discussions with the Finnish Government, and USAID. If we can act together, external agencies will support the program to reach all the population.

What do you suggest for the population with special needs?

How is your organization supporting them?

There are three ways we have been supporting. We have been instrumental in getting the participation of government officials of highest levels in inter-country working groups. We have been supporting the participation of non-state actors or various NGOs, international groups, associations, women groups associated with sanitation to make sure that non-governmental organization, disabled and women groups are well represented in SACOSAN.

Is there any other area?

Other areas in which we are involved in pushing the equity issue is making sure that the part of the discourse of discussions take place during the SACOSAN. Lastly, we also have sanitation fund which has been supporting numbers of initiatives in this region, not only in Nepal but the whole region. We are looking at India, Pakistan and Bangladesh and we are not looking at the advocacy side of it. But, we also need to be helping the government and non-governmental organizations to apply decentralized approach to large scale in improvement of sanitation. So, we are hoping that what one has been doing in an individual country would be shared and the experiences will be available for all the members of SACOSAN.

How do you see your investment?

We have invested significantly in having other regions of the world to learn from the experiences of SACOSAN. We have some representatives from ASIASAN (South East Asia Sanitation Conference), AFROSAN and South East Asia Sanitation Conference which is a very complex makeup within Africa. We are very interested in tapping the learning experiences and methodologies by which SACOSAN has grown over the last ten years. So we can share those experiences with other regions of the world. Ultimately, this mechanism is very powerful and advancing with common understanding and political commitments.

How do you look at the agenda of sanitation?

First of all sanitation is receiving a lot of attention, partly because of it is unmet target of MDGs, but also because it is seen as very good for money. If you invest in sanitation, what we have been investing now in other areas like health care will be driving the cost. It will reduce the cost of medicine or stop people from going to clinics for preventable diseases. If you invest in sanitation, you can save the money. The way sanitation is being improved is not dependent on the external support alone. Most of the funding is going now towards behavior change which is getting people to understand the relationship between sanitation and health and hygiene and human dignity. It means people are making their own investment. For every one dollar put into the program in behavior change, five dollars can be saved. A number of governments have recognized that this is the area for good investment for money.