What are the grey areas for reform and improvement 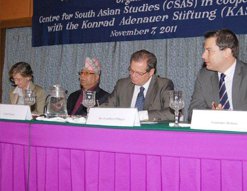 With elections approaching, Nepal hopes to take one closer step towards living up to the democratic nation it claims to be. While the effects of the Maoist led Civil War are just a stain on our history, Nepal still has a long way to go in terms of constitution-building and political stabilization. One kind of organization that helps with policy making, economic development, and political strategies through research, advocacy, and political dialogue is a think tank.

Nepal has several think tanks working within the communities and tackling various policy issues we face. Some think tanks, like the Institute for Social and Environmental Transition, Climate Change Network Nepal, and Forest Action Nepal, are dedicated to raising awareness about global climate change or helping people realize the consequences of their actions on the environment. Others, like the Himalayan Institute of Development, are dedicated to analyzing the effects of changing public policy issues. They aim to help people understand how changing policies will impact different aspects of the community, like poverty, political ideologies, or economic stance.

So what determines the success of these things of think tanks? Advocate Phurpa Tamang said, “For think tanks to be successful in what they do, they need to have a clear mission and vision and exercise transparency. They need to have a solid plan about nation-building, whether it’s at a local, regional, or national level. And lastly, the state, too, needs to support think tanks, financial and otherwise.”

The existing think tanks have had a profound effect in our community in many ways. For example, the Centre for South Asian Studies (CSAS), which researches on South Asian regional cooperation, peace and conflict, and “Nepal’s conduct of international relations,” has taken the discussion of these South Asian and Nepalese issues abroad to many countries, like Germany, Italy, Thailand, and India.  Locally, the think tank has organized seminars and conferences, where topics like environmental issues, armed conflicts, and constitution-making have been discussed and books about disaster management and regional cooperation and interaction have been launched.

Yuvraj Ghimire, senior news analyst, said that for a think tank to become successful in the work it does, it needs to have “people of ideas and opinion who understand their respective subjects in a wider context.” He further added that people working within a think tank need to have an “intellectual integrity” as “ideas may not conform to that of the general mass.” This, in turn, can lead to think tanks being “misunderstood” or even “vilified,” added Ghimire.

Dr Bipin Adhikari, who is the chairperson of a think tank NGO, Nepal Constitution Foundation, also agreed though that there are many think tanks in Nepal covering different public policy issues, they have been facing problems. He said, “The first problem obviously is the problem of long term investment, which is not coming. The second problem is concerned with the declining quality of their works. This does not help them to institutionalize and become sustainable.”

As many think tanks are independent of the government and non-profit, they have to depend on donors or investors for financial support. In Nepal, many international donors visit a think tank, learn about its work and processes, and then decide to invest money. Through this funding, think tanks can carry out the research, advocacy, or fund other means of accomplishing their goals.

However, this dependency on donors can pose as a problem too. Tamang said that sometimes, “think tanks are so heavily dependent on their donors that their objective can waver from their initial goals.” Think tanks may find themselves compromising their goals in order to keep their donors, without whose support they cannot exist, happy, he said.

As think tanks can play a key role in bringing about practical thinking and change into communities, some new think tanks are also coming soon. For example, the Kathmandu University School of Law, which is launching its five year joint law and management degree next year, is also considering establishing a non-profit think tank in the school that builds consensus on significant constitutional, legal and policy questions.

According to Adhikari, who is also steering the process at the law school, “an independent think tank and research centre of this sort will specialise in constitutional reform in Nepal. It will undertake research on human rights, devolution, the system of election and representation, justice sector changes, secularization, constitutional watchdogs and similar other issues.”

Adding further, Adhikari said, “the think tank will also introduce comparative constitutional concepts and knowledge about comparative constitutional practices into the Nepalese constitutional debate. It will pursue these objectives through its activities - research, teaching, information exchange, resource centre, consultancies and research collaboration. Through this, we hope to bring about sustainability of venture and quality of output in our work, which are interrelated and the key aspects of a successful think tank.”

Hindutva: Mughlani versus non-Mughlani By Dipak Gyawali 1 day, 23 hours ago

Women In Leadership By Aagya Pokharel 3 days, 9 hours ago

US-Iran Crisis And The Possible Impact By Binoj Basnyat 5 days, 3 hours ago

Wind Of Liberalization And Nepal By Dr. Tilak Rawal 3 weeks, 1 day ago