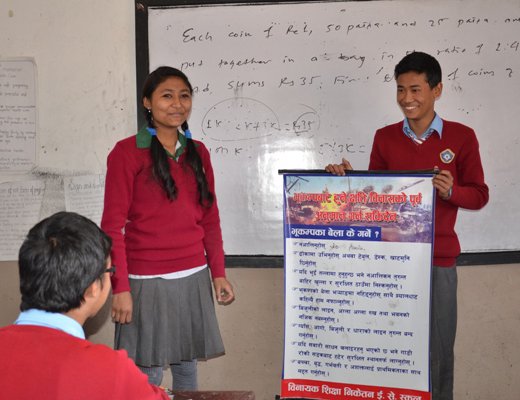 As Nepal lies in an active earthquake zone, a major earthquake may hit it any time sooner or later. Experts have predicted that there will be a high human casualty in case a quake hits Kathmandu valley at a scale the Nepal-Bihar earthquake did in 1934.

However, the government has shown little concern about preparedness planning. The quake will badly affect tens of thousands of children in schools and homes. Against this scenario, World Vision, an international non-governmental organization working in Nepal, has come up with a program to reduce the risk.

According to a press release of World Vision Nepal, the Cities Prepare report focuses on reducing vulnerabilities for the urban poor in Kathmandu and other six Asian cities.

The report highlights Kathmandu, alongside six Asian cities, Kolkata, India; Chittagong, Bangladesh; Bangkok, Thailand; Jakarta, Indonesia; Davao, Philippines; and Port Moresby, Papua New Guinea – in order to capture the varying preparedness contexts in cities across Asia.  The population of the Kathmandu valley has grown by 500% in the last 50 years with little corresponding investment in planning, services and building codes. The next earthquake is considered not only inevitable but overdue, and is likely to have a significantly greater impact than its predecessors due to population density.

In Southeast Asia alone, the UN says some 35 per cent of the urban population, roughly 190.7 million people, lives in slums or squatter settlements, making them particularly vulnerable to disasters.  World Vision’s Cities Prepare report calls on leaders to recognize and act on the dangers facing people living on the margins in urban centers.

“The vulnerability of Kathmanduites and urban dwellers in other cities of Nepal has increased because of urban wealth inequity. Learning from similar cities around Southeast Asia in the area of managing urban disaster risks will help while we work together with the urban communities here to manage disaster risk.

World Vision has continued working with communities in Kathmandu creating local disaster management committees and building their capacity on managing risks on their own.  A project is underway that will retrofit 22 government schools and 8 health post buildings in the valley.

“In collaboration with other humanitarian agencies, namely Save, Care and Oxfam, joint efforts are being made in preparedness with simulations, prepositioning and capacity building, for a major earthquake long due in Kathmandu,” says Surendra Babu Dhakal, Humanitarian Emergency Affairs Manager, and World Vision International Nepal.

As the international community marks the one-month of Super Typhoon Haiyan, this new report calls for stronger disaster planning for cities to avoid widespread future devastation. The report warns of rapid urbanization and increased risks. The UN Population Fund says Asia is home to half of the world’s urban population, and that roughly 44 million people across the Asia Pacific region move to urban areas each year. The report urges governments, businesses, civil society and communities to immediately address the changing urban landscape and ensure disaster preparedness is central to planning, future legislation and research.

The report recommends governments place more emphasis on disaster risk reduction programs for homes, schools, businesses and in developing policies in areas such as health care and municipal planning. It also calls for more partnerships to eliminate gaps in disaster planning at the municipal level and increased involvement of children in disaster preparedness plans.