Weeks after crying foul over election results, the UCPN-Maoist finds itself in greater mess with old wounds opening up in the leadership 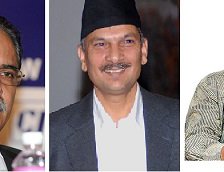 For a few weeks after the election results, the leadership of the Unified Communist Party of Nepal – Maoists was able to divert attention from its failure by raising the bogey of mass rigging and international conspiracy.

The untenable position taken up by the leadership is only just beginning to unravel.

And the main leadership is bearing the brunt of the wrath.

The painful defeat at the polls has seemingly created fissures within the party.

The knee-jerk reaction by the party after it was pushed to third position in the election had covered up the fissures but only for a while.

At the first opportunity the old wounds have opened up exposing deep mutual distrust among the top leadership.

The choice of candidates under the Proportional Representation (PR) system was the visible bone of contention.

The row would have been nothing unusual since all the rest of the political parties from the largest Nepali Congress to the smallest ones have faced similar internal dissensions over PR selection – but, for the fact that such bickering for positions used to be unheard of in the ‘revolutionary’ party in the past.

‘The current row is only the visible aspect of deep-seated divisions in the Maoist leadership,’ said leftist analyst Mumaram Khanal.

As a former senior Maoist leader himself Khanal would know.

‘This division can only grow worse,’ he said.

The party has called central committee meeting from January 10. And the focus of the agenda is likely to be the poor poll performance and the responsibility of leadership.

Since last year the party removed all executive positions except chairman following then vice chairman Bhattarai’s resignation from the position, Prachanda will find himself in the eye of the storm if the debate takes that direction.

‘It is likely that the focus of the debate will be the competence of main leadership,’ Khanal said.

Baburam Bhattarai has already given indications that he will put the chairman on notice at the upcoming central committee meeting.

‘I had hoped that he would correct the list of PR members. Unfortunately, he did not,’ Bhattarai told journalists.

To strengthen his voice, Bhattarai has also tried to rope in another former vice chairman Shrestha.

Analyst Khanal believes that the root of the current problems in the Maoists lie in their inability to transform the party into an organization fit for peaceful politics.

‘Their style of leadership and their organization up to local level are all the same as they used to be when it was leading the insurgency. Naturally, such an organization would not succeed in the open politics of multiparty competition.’

The Maoist leaders have agreed that they need to review their organizational structure.

‘We do have problems in organizational structure. There are local committees with over one hundred or two hundred members. One cannot imagine that such cells can function well. We certainly need to transform them and make them efficient,’ said Devendra Poudel.

Less than two years after the vertical split in the UCPN-Maoist, the party is again rattled by divisions.

But this division is not something that is totally new. It has had a long history behind.

Ever since they launched the ‘people’s war’ in 1996, then CPN-Maoist always moved from one crisis to another.

But those crises were overshadowed because the party was underground and involved in bloody conflict.

Four years after the start of insurgency, the Maoists first realized that they would not be able to establish ‘Naya Janabad’ or the new people’s democracy and started making noises about the democratic republic through constituent assembly.

In course of their peace talks and in course of the internal party deliberations, Baburam had consistently pursued the line of constituent assembly and democratic republic whereas Prachanda and his ideological guru Mohan Baidya were concerned about their strategic goal.

Things got so worse in 2004 that the party’s meeting in Phuntibang, Rolpa took disciplinary action against Baburam and adopted the agenda of ‘nationalism’ as the chief cause of the party.

Less than a year later, it made a 360 degree turn and came back to the agenda of democratic republic and constituent assembly – the line favoured by Baburam. The Chunbang meeting that took place in Rukum, 2005 was also remarkable for how it brought Prachanda and Baburam closer. Bhattarai had praised Prachanda as ‘leader of leaders’ at the meeting.

The line later propelled them closer to the parliamentary parties and brought about successful agitation overthrowing monarchy.

But the simmering ideological divisions did not go away. Baidya camp, finally, walked away after the dissolution of the first constituent assembly.

This should have settled the ideological fissures within the party. But, apparently not.

The Baburam camp is now putting pressure on the leadership itself.

It is not clear how far Shrestha will be willing to go with Baburam Bhattarai.

Shrestha, who was the foreign minister under Baburam government, had opposed his policy on numerous occasions including during the signing of bilateral investment policy with India.

Shrestha seems to have sided with Baburam this time only to express his resentment at Prachanda for dropping his nominees from the PR list.

In any case, the upcoming central committee meeting is expected to be significant in shaping the future course for the UCPN-Maoists.

'There is no question of any split in party. These things will be settled by the party meeting,’ said leader Barshaman Pun Ananta.

Party split may not be in the near horizon, but the Maoists will certainly need to introspect and correct themselves to prevent the divisions from becoming serious.