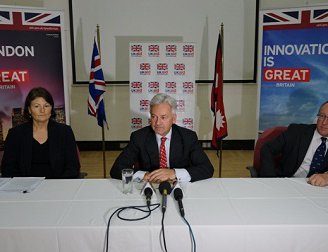 As Nepal and UK get ready to mark two centuries of friendship, the UK is all set to continue its longstanding support to Nepal by focusing its assistance more on economic development to combat poverty in Nepal.

Despite the end of the ten year long civil war, Nepal still struggles to climb up the development ladder. The GDP per capita of the country stands at a low $1300 (2011 est.) and 25.2% (2011 est.) of the total population are still living under the poverty line.  About 46% of the population remains largely unemployed. The chronic poverty is caused by many factors mainly due to weak economic policies as a result of the political instability. The domestic economy is characterized by low productivity and under investment from the private sector and volatile policies. This has resulted increased labour migration, making Nepal highly dependent on remittance flows. As a consequence, inequality and economic exclusion remain widespread.

In this context, the Department for International Development (DFID) has decided to direct its development programme from ‘a peace building’ approach to an increased focus on creating vital jobs and growth.“Economic development is the only way that Nepal can leave behind poverty for good”, said UK minister for State and International Development Alan Duncan, on his fifth visit to Nepal to monitor the work done by UK Aid. “I have discussed the impact of the UK’s assistance in education, road-building and jobs in Nepal and underlined the need to focus more on these area in the days to come”, he added.

To realize this vision of economic development, the DFID aims to create 230,000 jobs out of which 50% of them will be for women by 2015. The British aid organization will also help build 532 km and maintain 3700 km of road, which is expected play a vital role in promoting local trade and business. Through its forestry programme in different parts of the country, DFID looks to lift 570,000 people out of poverty. The  British Ambassador to Nepal,  Andy Sparkes has announced earlier that DFID is working on the design of an ‘Access to Finance’ programme which will provide small businessmen and farmers with what they need to grow into SMEs and stimulate employment.

With plans such as these, the UK’s development program in Nepal has almost doubled already in size this year with a spending £103m by the end of March 2014.

DFID has been a steady supporter of economic development in Nepal in the past as well. Just in a decade, it has helped about 10,000 people obtain long term employment through skill development program. The British-supported Market Access for Small Holder Farmers Programme has improved the income of more than 20,000 people and more than 700 entrepreneurs have their business skills developed. It’s projects have helped over 1 million people in remote districts get connected to the national road network through the construction of 1224km of rural roads and 246 pedestrian bridges, giving them access to opportunities and a chance to raise their living standard.

King Birendra And His Family: Nineteen Years After Massacre By NEW SPOTLIGHT ONLINE 2 hours, 51 minutes ago

NEPAL-INDIA Bonds Across Border By Keshab Poudel 1 day, 18 hours ago

India Open To Engaging With Nepal In An Environment Of Trust And Confidence: MEA Spokesperson By NEW SPOTLIGHT ONLINE 3 days, 5 hours ago