Beni is located in the Thamel area and sells bags, baskets, wallets, decorations and many other things made out of rubbish collected off the streets, from hotels and from restaurants. 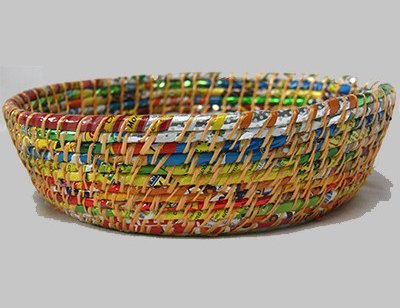 Beni products, as it says on the brochure, gives ‘a second life to rubbish’, but it does more than that. The products made out of recycled material in the Beni store are made by women working in rural areas that have been given a second chance.

Beniis located in the Thamel area and sells bags, baskets, wallets, decorations and many other things made out of rubbish collected off the streets, from hotels and from restaurants.

The store in Thamel has been operating for the past three years and is popular with tourists.

Beni, is the conception of Beni Rani Ghale. She is passionate and pragmatic and her enthusiasm for this project is palpable, so is her desire to help people. She began thinking of ways she could help women to help themselves in 2002.

“If there is a problem, there is a solution also”, she says, speaking at her store in Thamel. The store is filled from floor to roof with hand-craft products.

Despite the power-cuts, the room has a bright atmosphere owing to the vibrant products that line the walls.

A large black bag that was once an inner tube from a tyre hangs from the wall, alongside shopping bags that would have once been stuffed with rice collected from local restaurants. There are shelves filled with colourful purses made from rubbish like discarded chip packets found along the road.

Beni previously worked as a mid-wife in a small village with aspirations to become a doctor before getting involved in women’s education.

The women in theBeni project come from the outlaying hill districts.

“These women are forced to come into the city because they are uneducated, looking for work and want a good education for their children”, Beni says.

Beni has been teaching ladies how to turn trash into treasure for the past eight years. After aslow start, Beni is now working with 107 ladies mostly from the Ganesh Himal region.

Beni holds group training sessions with the women and teaches them how to source material, how to clean it and turn it into one of the creations found in the store.

More importantly, after the training the women can return to their villages and work from home.

“It’s a hard society for women” Beni says, referring to the embedded inequality that women face in Nepal, particularly in rural areas. “I want to empower them by teaching themskills”.

The majority of Nepali people live in rural areas and face many obstacles in accessing education and economic opportunities. In a patriarchal society like Nepal, women are particularly hindered.

According to the HumanDevelopmentReport in 2009, gender inequality in Nepal is demonstrated by the formal and informal rules that dictate women’s participation in regards to opportunities, decision- making, access to resources, and women’s control over resources.

Beni hopes that the women in her project will set an example showing that womenhave an equal part in society in terms of thinking, leaning, creating as well as earning a basic income.

Beni says that often the women involved in the project “didn’t get a chance to learn things” because they are denied access to education.

Figures from 2010 showed that the literacy disparity between men and women in Nepal is vast. The literacy rate for Nepali men is 62.7 per cent, and women’s literacy is a meagre 34.9 per cent.

A strong advocate for women’s rights, Beni says that she wants to show that women “have a right to education, to learn, to speak…. we are equal”

According to the The Asia Foundation, ‘increasing women’s economic opportunities are paramount for women to improve their lives and take control of their futures’.

Beni says that after the training, the women involved in the project feel a sense of accomplishment when they realise “they are not useless, they can create, they can think”.

You can find the Beni products at the Kathmandu Guesthouse. The store is behind Northfield Café Thamel.

How Prepared Is Nepal For Future Disasters? By Dr. Dhruba Gautam 21 hours, 43 minutes ago

The Informal Sector In Nepal: Myth And Reality By Shanker Man Singh 2 days, 23 hours ago

Is Combating Viruses With Vaccine Inequity Possible? By Radha Paudel 5 days, 23 hours ago