‘Shivaratri: Caste in a New Light’ 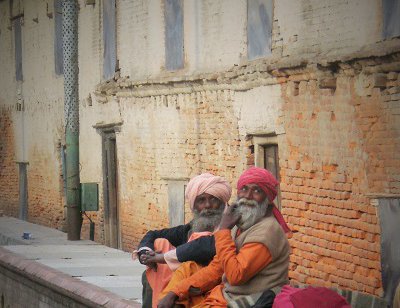 It was the fourth toll I paid in less than two minutes when I left my flat this morning.

The entrepreneurial children of Balajuhad advantageously roped off the streets to collect their tithes on behalf of Lord Shiva.  I decided to walk to Pashupati to celebrate Shivaratri.  Although, looking at another string of children down the road, I worried whether I had brought enough money.

Maha Shivaratri is one of the most sacred festivals in the Hindu religion. Hinduism wins as the oldest major religion in the world. It was introduced by the Aryan settlers in Nepal over 3,000 years ago.  The victors also brought with them the first framework of a caste system, although it would take centuries before the Malla dynasty firmly entrenched the caste system into Nepali culture. 'Caste’ derives from the Portuguese casta, and refers to a breed or race.

The idea to classify Nepalese society according to European legal codes came from Prime Minister Jung Bhadur Rana in 1854. The ruling Ranas naturally placed themselves at the top of the system and legalised the caste structure in the voluminous Muluki Ain laws (civil code). Ironically, these laws made all foreigners – including Europeans – impure by definition. Foreigners are not allowed in the temples at Pasipatunath.

Both the Hindu religion and the caste system are new to me, I was curious. A Sadhu sitting near Pashupati’s Shrine for Nobility was happy to advise me about the Hindu religion. ‘We see religion differently I think,’ he explained.  ‘No one started Hinduism.  There will never be a doctrine that captures why we live.’  Instead, Hinduism offers six darsanam (sects), and followers choose one philosophy and apply it to their own lives.  Adaptation being essential for survival – I could understand Hinduism’s success, but is the caste system undergoing an adaptation of its own?

The caste is a pyramid system: elite minorities overlooking a disadvantaged majority.  A foreigner might be quick to judge, but most countries have this in some socioeconomic or political form.

Recent legislation in Nepal is attempting to challenge the discriminatory organisation of the caste system.

As early as the 1960s it became illegal to discriminate against the Dalitor untouchable caste, and several more equality laws were introduced over the decades with varying success.  In 2011 Nepal's Parliament passed an Act on caste-based discrimination and untouchability. The laws were designed to end discrimination as well as enforce punishments for anyone breaching the Act.

The problem lies not in the law but in its enforcement. There are still wide cases of discrimination being reported in rural and semi-urban areas.  Nepal will soon reach a pivotal point with the drafting of its Constitution high on Prime Minister Sushil Koirala’s agenda this year, but it remains to be seen how the new government will redefine its people’s vision for society.

Admittedly, I could not see the caste system in practice at Shivaratri. Everyone queued in the same lines, ate the same food, sang the same music and made the same offerings.  As a foreigner, I was even given preferential treatment.  Religion did what it was meant to do: bring people together.

‘Nothing will change though,’ my taxi driver said on the way home.  ‘Things will always be fixed.’

Getting out of the car, I was approached by a few lingering children roping off the street.  I gave them my last rupees.

‘Shubha Shivaratri,’ I said, and then a thought occurred.  ‘By the way, what do you think about caste?’

They looked at each other and laughed, ‘What is a caste?’

EP DELEGATION Visit For Cause By A Correspondent 11 hours, 41 minutes ago