Even as Nepalese may be giving up on their best organic farming practices, Judith Chase has chosen to revive Nepal's glory in organic agriculture 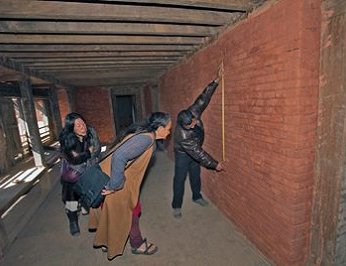 A nation cannot be built by a few individuals, a particular community or some groups. Natives and non-natives make efforts that go to build a nation. Nepal is one of the few countries of the world where non-natives have shown their love so much that some of them have set out to revive Nepal's glory and protect the national identity.

Judith Chase and her husband, Americans, are making rural and remote Nepal as their home, showing the Nepalese that their way of engaging in agriculture is their strength. Judith Chase started Gamcha Farm in 1987. She came to Nepal in 1976 to study the functional art of native artists. She and her husband, Jim, moved to the farm in the Kathmandu Valley in 1987, wanting to escape life in the city for something resembling the rural households, Chase had observed in the hills of Nepal.

Although Judith and her husband initially established a farm in Gamcha of Bhaktapur district, which is just over 10 kilometers from Kathmandu. Now they have moved to Paatlekhet, 12 kms down the mountain from Dhulikhel. In her new farm, there are more than 1,000 species of vegetables, fruits, berries and fodder here, all grown without using chemical fertilizers or pesticides.

Discouraging use of hybrid, the farm encourages farmers to use Nepali pollinated seeds. As the farmers who are following Judith are small farmers, they are making a lot of benefit as they get good prices at organic markets where large numbers of expats and locals come to buy them.

"We teach farmers right from the basics, impart them the skills, and when they start cultivation, help them find market for it," Judith says. "The goal is to develop a community of organic farmers with a cooperative marketing system."

Judith is hopeful because a similar initiative she started in Thimi in the 1980s trained 200 local women, many of whom are still growing organic vegetables. At Paatlekhet, she hopes to replicate the project on a larger scale.

Judith says there is a lot to be learned from local farmers. She has started an initiative to save seeds by involving women. She says: "These seeds are well adapted to local soil and climate, and are better than imported hybrids. Why spend money on expensive imported seeds when we have better options in Nepal?"

"We're happy to announce our  partnership in a 3-year research project  funded by dZi Foundation, which started in January 2013.  We are comparing yields of 5 different organic planting systems, plant protection against insects and diseases using local plants and other materials, and extension services to our associate farmers (who have been trained by us).

"Transferability is the test of what we're doing.  As always, our aim is to help Nepali farmers improve their own health by improving their farming methods and the health of the environment with productive, income-producing organic methods,” writes in the wall of Everything Organic Nursery Pvt. Ltd which was established in 2010 with the overall aim of recognizing the wealth and health of traditional Nepali rural life and enhancing this way of life using new approaches and materials for organic farming.  We demonstrate and teach Biointensive organic methods which produce large yields and healthy vegetables, berries, fruit and nut trees.  Small farmers can grow high value crops and increase their income.

One of EONursery’s primary interests is to erase this image and offer ways to enrich the lives of rural people so that farmers can remain active on their own lands and enjoy the wealth and beauty of ‘traditional living enhanced’. In the community, we hope to establish a group of independent growers with a cooperative marketing system.

"We are Judith (Oma) Chase and Jim Danisch.  We have been involved with Nepal since 1975 in many different ways.  Oma spent many years trekking all over Nepal, visiting villages to photograph and collect the art that people make for their household use:  wooden and metal containers, textiles, etc."

Now the word "organic" is well-known in Nepal, and many people have taken up organic farming and marketing. Our approach to organic farming now was worked out at the Thimi farm, and is well-established yet still evolving with the experience of many years.

At a time when Nepalese youth are flying to Gulf to make money, Judith and her husband have shown that Nepal has enough space and opportunities to make money. Judith and Jim are working to preserve Nepal’s unique way of farming.

Nepal Airlines Plane Took Off For Brisbane With Stranded Australians And New Zealanders By NEW SPOTLIGHT ONLINE 2 days, 4 hours ago

The Local Effects And Security Response To Coronavirus By Binoj Basnyat 3 days, 11 hours ago