Some 35 families, including Chandra’s, provided their labour and worked for a period of around 50 days 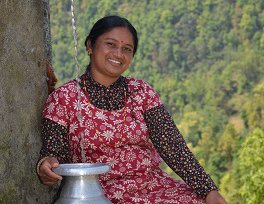 Chandra’s happiness knows no bounds.  Her perennial backache has disappeared. Her village, which saw a growing disharmony among people over the limited access to water before, is now enjoying a much better relationship among them. The simple reason - water is now accessible and available.

Chandra, 34, a mother of two teenagers, lives with her husband and in-laws in Saldada village in Lekhnath Municipality of Kaski District, Nepal. Her days are spent taking care of household chores and day-to-day needs of her family. Many years ago, after she married her husband and came to live in his village, she was entrusted with the duty to fetch water for the family’s daily use and consumption.

“It was my responsibility to bring water from the nearby spring. I had to walk for almost half an hour everyday just to carry water from a natural spring and an extra hour to wash clothes in the river. My back would hurt but I had no choice,” recalls Chandra. “Oftentimes, I had fought with other women at the water source over water as, in the spring, it was limited and we had to wait for it to refill.”

Today her face lights up when she talks about how fortunate she is now with water being easily available and her saved time.  “Not only me but my family, especially my mother- in-law begins her day thanking god for the water with which she washes her face,” says Chandra and continues, “When water came to our doorsteps, it was the happiest time of my life here after getting married. Even now it pains me to think about the days when we had no access to water.”

When World Vision first entered her village in 2005, the needs of the village were assessed and Chandra, like other community people, were asked what they needed the most. The reply was, 'Water'. World Vision then mobilized people in the village to build a 5,000 litres tank which would collect water from a nearby forest spring water source for further distribution to households, providing needed materials for construction and technical support. Some 35 families, including Chandra’s, provided their labour and worked for a period of around 50 days. By the end of the second month water was available in taps for all the households. In order to ensure that the drinking water system is well-maintained, a Water Users Committee was also formed with community representatives who oversaw the management and maintenance of funds to which every household contributes a minimal amount. With drinking water available at their front yard, there have been many other changes in Chandra’s village. Water-borne illnesses have declined, women have saved time for other activities, and with the run-off water, families have started to grow vegetables in the plots of land around their houses.

Despite Kaski District being dominated by Himalayan peaks covered with ice and snow, access to water is still a major problem in many villages. For many children and women, their daily routine involves walking for up to an hour over steep terrains to collect water from a stream or spring, sometimes twice a day. Sometimes it means children miss school. Girls and women are subjected to risk and physical ailments.In some cases families will gradually move away as water sources dry up. Once-thriving villages begin to die.

World Vision began working in Kaski District in 2002, initially with a water and sanitation project. The work then expanded to become an Area Development Programme (ADP) sponsoring children, and addressing a range of needs of children in the poorest villages of Kalika, Thumki, Majthana, Rupakot,  Hansapur Village Development Committees (VDC) and different wards of Lekhnath Municipality. Developing partnerships with community groups, VDCs, non-governmental organizations, government line agencies and various like-minded organizations, over the years the ADP addressed issues in the areas it worked on. Poor water and sanitation, low agricultural production, limited access to markets for poor farmers, environmental degradation impacting forests and fisheries, migrant workers, and limited access to education were issues taken into account while designing projects.  Involving local people in decision-making about the changes they wanted for their community and mobilizing the community played an important role in implementing projects. The activities for most of these projects included awareness-raising, technical and management training, basic infrastructure development, developing networks, and coordination. Women particularly were encouraged to become involved with local organizations. Though World Vision ended its work in the district in 2013, women have continued to bring changes in the lives of their families and communities. World Vision’s work in Kaski district from 2002 to 2013 has benefitted 76,830 children, men and women.

Nepal's Over Dependency And Sluggish Development By Hari Prasad Shrestha 7 hours, 23 minutes ago

Nepal Is Bearing The Disproportionate Burden Of Climate Change By BHARAT RAJ PAUDYAL 3 days, 11 hours ago

Refugees In Nepal: Recognition And Inclusion By Deepesh Das Shrestha 6 days, 6 hours ago