Bishnu Prasad speaks about his experiences of torture during the Civil War and of his life. 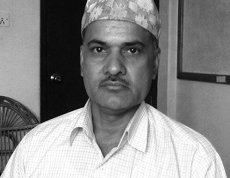 Bishnu Prasad Bhattarai lives in a village in Western Nepal, where he ran a dairy cooperative before the war.

‘Please, tell my name.  Show my photo.  My story is important.’

I wanted to know what life was like before the war.

‘Our village was quiet and content.  I was a young man with four children and our community was working well together.’

‘When the Maoists came, they began to recruit us and demand our food.  I was fortunate that my nephew was going to India.  They saw my house and wanted to use it for weapons storage.  I refused.  They blindfolded me and took me into the jungle, accusing me of supporting the Army.  When I was returned, they had already put their supplies in my cellars and locked the doors.’

Shortly after the Army learned that there were weapons in Bishnu’s house.  They came and tied him to a tree and assaulted him in front of his two youngest children.Bishnuwas taken to prison and there tortured for 24 days whilst in isolation.  He was bound, gagged, and beaten, the signs of which still show today.

‘They put metal socks on my feet and electrocuted me.  They struck my legs and arms until I couldn’t use them..  My clothing was taken from me and I sat alone in the dark.  They wanted information.  They wanted the names and locations of rebels.  I told them ‘I am not a Maoist. I am a dairy farmer’, but they did not believe me.’

Bishnu was released and had to return to his house naked, where he found all of his food stock corrupted.  Soldiers had taken his land card and national ID and to this day Bishnu is not able to get them back.The Army carried out regular visits and he was beaten in front of his oldest daughter.  He was badly injured but the medical posts would not treat him, believing him to be a rebel.

Bishnu recalls the hardships of his neighbours during the conflict.  ‘Our village suffered terribly during the war.  The Maoists came more often to recruit us and take our food.  Some people joined them in fear of the Army.  When the Maoists were killed by soldiers, they would come to our houses and beat us.  We were accused of being informants.  They played a cruel game. The Army would arrest and torture a Maoist; they would demand the names of other rebels.  The Maoists would give our names instead, and so the Army would come for us.’

During the War, trauma began to take its toll.

‘I would start to lose consciousness and have horrible nightmares.  My daughter said that at night I began to shout, ‘they are coming, they are coming.’  I would try to find a weapon and begin pushing doors and attacking the air.  I do not remember this but she said it had gotten very bad.’

This carried on for six years, during which time Bishnu’s son rescued him and brought him to India where he began to receive treatment.

‘I couldn’t receive any treatment in Nepal as the clinics believed I was a Maoist.  In Delhi I was given medication and the nightmares began to ease.  When the Peace Treaty was signed I returned home, but life was hard.’

Bishnu still bears the physical and emotional scars of the War.

‘My legs and arms were badly beaten and I struggle to use my left leg.  The torture had left me deaf in my ear and I cannot work like I used to.  My daughter says I still have blackouts and sometimes behave terribly, but I cannot remember this.’

Kopila, an NGO dedicated to improving the lives of those living with mental illness and abuse, found Bishnuone year ago.

‘Kopila has been very kind to me.  It helps to pay for my medication and subsidises my income so I can provide for my children.  They have also helped me to form a group with others who suffered during the War.  We share our experiences and support each other.  I feel safe.  My life without Kopila would have been much harder than it is now.’

I asked Bishnu if he could say one thing to the new government, what it would be.

‘We were innocent people during the war, but we suffered the most.  Both sides of the conflict have equal blame for this.  I was punished by the State and tortured without cause.  My body and my mind have been damaged and my business ruined.  I cannot work very well and because of this my children have suffered.  They did not receive the education and support that they deserved and this is terribly sad.’

‘Many people don’t want to talk about it anymore.  They want to forget the war and move on.  But we must talk about it in order to understand what happened.  That is the only way to move forward.  My children deserve to know why – why I was taken and beaten by the Army.  If I were a rebel, then I should have been arrested, not tortured.  They deserve to know why they have lost opportunities that should have been given to them.’

A United Nations Human Rights Committee Report in February 2014 raised strong concerns about the lack of effective mechanisms to respond to victims of human rights violations during the recent Civil War.

‘There is no compensation and this is wrong.  I rely on services like Kopila for the lifelong treatment that I need.  The government has provided nothing and returned nothing that it has taken.  My family and I want an explanation for this.  Above anything else, we deserve an explanation.’

EP DELEGATION Visit For Cause By A Correspondent 11 hours, 13 minutes ago