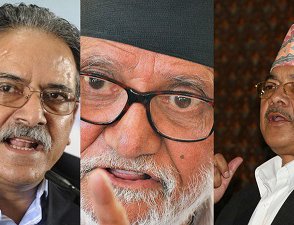 Even as agreement on who will head the key CA's constitutional committee eludes the major parties,  new doubts have surfaced if they can work together to frame the long-overdue statute.  Despite agreement on the truth and reconciliation commission the parties differ on  initiating legal actions against those accused of crimes during the decade-long bloody Maoist insurgency.

The differences have come to a head over the much talked-about case of the murder of one Krishna Prasad Adhikari in Gorkha, the home district of Maoist leader Baburam Bhattarai.

Following persistent pressures from national and international human rights activists and groups the government has bowed to the demand of  the late Adhikari's parents who have been on hunger strike for months.  But as soon as the police filed a case against a group of the accused in the court in the southern district of Chitwan, the political temperature in the capital Kathmandu has soared.

In protest at what it sees as "a reactionary" move to corner the "revolutionary" forces, the main opposition Maoist party has boycotted  all dialogue with the multi-party coalition comprising of the two largest parties -- the Nepali Congress and the United Marxist Leninist (UML).

But going by the public utterances of their senior leaders  the two largest coalition partners -- the Nepali Congress and the UML --  do not seem in any mood to budge. Prime Minister Sushil Koirala and the Deputy Prime Minister Bamdev Gautam both sounded a combative tone vis-a-vis the main opposition.

At a time when the spirit of reconciliation is needed the most to clear way for stability through a new constitution the major parties are on the road of confrontation.   The divergent stands on whether the elections for the local councils  should be the country's priority has been another divisive factor which threatens to vitiate the political atmosphere in the coming days. The governing parties favour the local elections at the earliest, the main opposition warns against a hurry.

Irrespective of the merits or demerits of the arguments the two sides have put forward in defence of their respective positions very few have doubts about the partisan agenda that they carry. This has led to the widening of the trust deficit which had been there right from the days the two sides entered into peace process seven years ago.

Until and unless they make sincere efforts to, and achieve success in,  narrowing that deficit  Nepal's political future is bound to remain shaky. The first major indication of such a shaky future could come in the form of yet another failure to meet the deadline of the constitution-making.

A quarter of the one-year deadline that the parties had set themselves has already passed without much headway. There is no indication yet that the remaining three quarters will be much different.