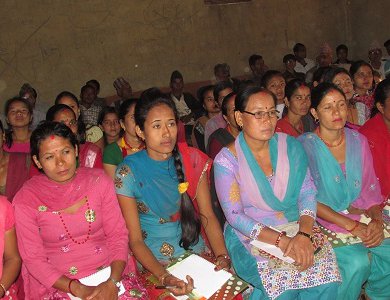 As Nepal is in the phase of drafting the constitution with the purpose of fulfilling the rights and expectations of citizens and their moral imperatives for a stable peace, Friedrich-Ebert-Stiftung (FES) is organizing programs throughout the country to involve the people in important debates.

The modern constitutional state balances the rights and duties of citizens and is also capable of implementing many humanitarian laws and human rights–based international obligations. Since democracy is based on national self-determination, political leadership decides vital national questions within the parliament. Constitution also requires popular ownership in it to muster broad legitimacy. In this context, constitutional debate among the sovereign citizens is essential for their informed participation about the ends and means of constitution making and harness civic virtues for good life.

Four speakers engaged the participants on various themes in the seminar. Dev Raj Dahal, head of FES Nepal Office, spoke on the properties of state, condition of Nepali state, governance, leadership, political parties, civil society and scope for the modernization of Nepal’s education, economy, technology, institutional culture and leadership transformation, ensuring ecological, social, gender and inter-generational justice. He said that the praxis of civic education must be reflective, not the rote learning of textbooks. Only then it can provide civic consciousness enabling citizens to self-determine their choice on public and private matters, overcome tutelage of all kinds and build the state from below by strengthening local initiatives and institutions. He added, “Civic education is an education about enlightenment which aims to seek a harmony between knowledge and wisdom through inner vigilance of each person.”

Another speaker Kashi Raj Dahal, Senior Constitutional Expert, explained about the tasks ahead in drafting new constitution by the Constituent Assembly, issues to be sorted out such as federalism, forms of governance, citizenship, election system, autonomy of court, political pluralism, etc. and responded to many questions raised by the participants regarding Muluki Ain, democracy and loktantra, right of women to abort unwanted child, diverse approaches of political leadership about common nationalism, democracy’s  ability to fight decolonization and role of leadership and citizens in democratic development of the nation.

Senior Journalist, Yubaraj Ghimire, spoke on the “Role of Media in Civic Education.” He said that Nepali people are simple and wise. They trusted the leaders who failed to accomplish the national task of drafting the constitution. Civil society and media also failed to act as watchdog of public interest. Both of them claimed that since we brought political change we should get power. Even the Supreme Court maintained double standards. Political leaders played with the feudal politics of negation not democratic politics of compromise of legitimate interest like K. P. Bhattarai did after the political change of 1990. Bhattarai successfully accomplished the tasks of national reconciliation, prepared the constitution and conducted national election within a year. But modern politics has created a fatal gap between promise and delivery. He further said that democracy is not a label; it requires democratic character of leaders and their ability to inspire citizens and strengthen democratic institutions and political culture. Without national independence democracy cannot be consolidated. Herein lay the role of media in fostering civic education, civic spirit and civic disposition.

Chandra Dev Bhatta, Program Officer of FES, explained the Handouts on Democracy distributed among the participants and narrated the democratic experience of various countries, secularism, human rights, rule of law, functions of civil society in strengthening national culture, globalization and types of democracy. Yagnya B. Rai, Campus Chief, chairing the concluding session of the program expressed commitment to spread civic education in every family, village and locality of the area, remain in touch with the resource persons and expected support for the library.

At the end of the meeting a New Social Fund to mitigate the crisis stemming from fire, earth quake, flood, landslides, etc was created.  The people of Khurkot demonstrated the civility of society by engaging in delivering the service to the member of 17 households whose houses were consumed by the fire on 11th April.