The Ministry of Peace and Reconstruction through its Nepal Peace Trust Fund (NPTF) is now overseeing a reconstruction of all the destroyed police units. The reconstruction is being done in three phases out of which the first phase has already been co 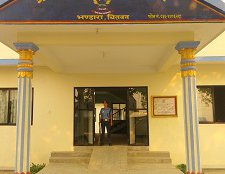 “We had no option but to shut down our shop by 6 and stay indoors” says Radha Pathak. “The law and order situation was so bad it was impossible to venture out after dusk,” the 50 year old recalls the nightmare suffered during the decade-long Maoist insurgency.

Radha and her husband run a hotel in the small town of Manahari along the East-West highway, 30 km from the bustling business centre Hetauda. Despite its proximity to the district administrative headquarter the small town suffered a lot during the insurgency. The area police office was completely destroyed by rebels. Two policemen were shot at in broad daylight. The town remained without security personnel for years.

“Of course there was no security throughout the country”, says Radha’s husband. “But what caused trouble for us was its spillover effect. In the absence of security personnel in the area, crimes more than doubled. Petty theft, dacoity, murder and smuggling became a rule rather than exception", he adds.

The end of the insurgency after the Comprehensive Peace Accord in 2006 brought hopes of a new life. But there was no relief to the locals yet. They faced new problems. Alcoholism, a major problem with Makwanpur’s Chepang community, was becoming a huge social threat. To top it off Manahari’s famous marijuana business was thriving.

Things changed a couple of years later. With a new area police office in town, people now heave a sigh of relief.  The police have arrested drug dealers to domestic violence perpetrators and destroyed hectares of marijuana fields. Normalcy resounds in Manahari.  “Business is as good as ever now”, says Bachuram Thapa Magar, a small businessman.

According to Nepal Police, about 800 police units were destroyed during the Maoist insurgency in different parts across the country. Absence of police officers shot up the crime rate in almost all these places. The deteriorating law and order situation was complemented by the already ongoing insurgency. Locals lived a dreadful life.

Locals say that the new police offices have, most importantly, restored law and order situation in their town and villages. Police personnels, too, agree that the new buildings have upped their morale and provided better opportunity for service delivery. They feel that their motivation level has shot up. This has played an important part in providing better service and consequently a better law and order situation. Post the destruction of their offices, many personnels were forced to flee or either reside in temporary shelters.

“We operated out of a rented accommodation with mere 3 rooms”, says Sub Inspector Ram Bahadur Tandon of Suryapura, Rupandehi. Already facing threat to life, the deplorable working conditions caused severe mental stress for the personnels. Service delivery, he admits, was affected. The temporary shelters were often congested and many did not even have enough custody space to keep those detained. “Sometimes we had to let go criminals due to lack of space”, he says to explain how terrible working condition was.A temporary shelter also meant that it was almost impossible to keep confidential information concealed. Police officers said that many at times, they faced attack from rebels after being easily spied on.

The reconstruction of new police post has resulted in a drastic decrease in the crime rate. Inspector in charge of Suryapura area police office K. B Karki says that the area, infamous for dacoity, has not recorded any case of murder or dacoity in the past one year. The police’s swiftness, thanks to the new infrastructures and facilities, is the major factor behind it he says. “Nowadays, if we do not reach a spot within 10 minutes, we receive a phone call enquiring why we are late”, says Karki.

The new working condition amongst police officers has also resulted in better relations with the public. The two sides have worked together in many community projects. Awareness and relationship building programs are held at regular intervals. On the other hand, the locals are upbeat about the closer accessibility to police offices. Interestingly, cases of domestic violence against women bombard the police offices these days.  Thanks to the new building, there is now a separate section to deal with such cases. Earlier, the inaccessibility made it difficult for women to report their case.

Not just the law and order situation, even the local economy has also witnessed a big boost. Take, for instance, Taandi, a small town less than 10 kms away from the popular tourist destination Sauraha. Economic activity around the tourist friendly area had massively shrunk during the insurgency especially in the absence of a permanent police office. Thanks to the new police office, businesses are thriving. Private offices, banks and offices have opened up. The town boasts of a busy market now.

Apart from the direct benefits, locals say that the improved law and order situation has had many other spillover effects. Many locals were forced to migrate to a much safer city or town after the destruction of police offices in their area. In some cases, more than half of the population of a village was forced to flee due to the poor security condition. Migration due to security reasons has now come under control. With new area police offices and police, locals say they feel much safer now in their own village.

Although the new police buildings have had a huge impact on the community, problems remain. One of the major problems is the lack of maintenance.  The budget for running the office is devoid of a substantial maintenance cost and many of the buildings built during the first phases are already wearing off.

Nepal Police spokesperson SSP Ganesh KC admits that although budget has been allotted for maintenance, it is very nominal. "The money for maintenance is given to the District Police Office which is then responsible for dividing the money amongst the different units", he says. Eventually, the money that trickles down to the area police offices is very less.

The lack of proper budget has affected not only the maintenance but also police’s accessibility to many places. Some of the VDCs under the area police office’s jurisdiction are miles away. The lack of vehicles and enough budget for fuel has handicapped the police from reaching the spot. This has rendered the new police buildings of little relevance to people living there.

There has also been a lack of community participation in the building process. Agreements were made in many places that the community would help in building the surrounding walls. But much of it has remained in mere words.

“Community participation is equally required to make the service delivery of the police more effective”, says Shailendra Sigdel, Director of Foundation for Development Management, an independent firm which has been conducting an impact assessment of the newly built police units in the internal peace and security. Although participation from people has been seen in some of the districts, it has been rare. Sigdel opines that it should be a give and take relationship. “Police personnels work day in and day out to serve the people. The community must learn to give back as well”, he says.

Congestions are a problem in many of the buildings. Some of the police buildings were built only with a few police officers in mind. With more deployment now, the space is not enough. Barracks are overcrowded and police officers are forced to stay in appalling conditions. Explaining the situation spokesperson KC says it is not a case of mismanagement. “When some of these new buildings were built, they were under control of an SI or Inspector. Now the same buildings are under control of a DSP due to the increase in area of jurisdiction”. This has increased the number of police officers and hence the lack of available space. “We acknowledge the problem and are looking into how we can properly accommodate our soldiers”, he says.

The new police buildings have been a big boon to the people. An improved law and order situation has been its greatest benefit. Add to that, it has also led to the much needed decrease in social crimes and redressal of women related crimes. But with no maintenance and problem like congestion already arising in some of the police offices, it become necessary to take immediate steps before it makes any effect on the service delivery.