With the visit of a French Business Delegation, Nepal and France have started business 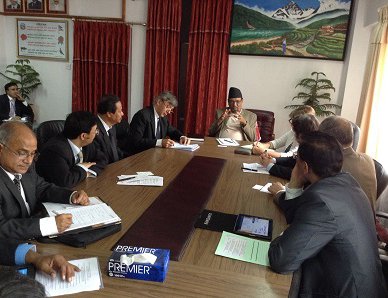 As Nepal is in search of foreign investment in various infrastructure projects, a recent visit by a French business delegation has generated good vibes. Led by René Cougard, head of Regional Economic Service at the French Embassy in New Delhi, the delegation shared their views with ministers, government officials and business leaders, including officials of Federation of Nepalese Chamber of Commerce and Industry.

Members of the delegation, representing various companies, said that there are several avenues for investment in Nepal, particularly in the energy, urban transport and other such areas.

The main objective of this visit was to explore trade and investment opportunities in Nepal.  The delegation focused on priority sectors identified by the Government of Nepal such as hydropower/energy, urban development, infrastructure, and tourism.

Although Nepal and France established bilateral relations a long time ago and their contacts reached back almost two centuries, they are yet to intensify their bilateral trade.

According to Nepal's industrialists, there is immense possibility to expand bilateral trade between the two countries. "France can be a good market for Nepalese garments, carpets and herbal products. Similarly, Nepal can import high tech from France," said Pradeep Jung Pandey, newly elected president of Federation of Nepalese Chamber of Commerce and Industry.

At a time when Nepal is desperately searching for foreign investment in various sectors, there is also the possibility to attract the investment from France in the areas like urban transport.

"Since Nepal's capital Kathmandu is in need of a modern commuter system, Nepal can invite French investors in this area," said president Pandey, who led Nepalese business delegation.

According to a press statement by the French embassy, “Nepali officials explained the visit was an indication that the investors have shown interest in investment in Nepal while the country has embarked on a more stable political situation after November election.”

According to Republica, the delegation comprises representatives from Alstom T&D and Accor that work on power transmission sector. Likewise, there are officials from Dassault Système India which provides businesses and people with virtual universes to imagine sustainable innovations. Representatives of Alstrom Power India, which is a global leader in the world of power generation and power transmission, are also in the delegation.

The team met with Finance Minister Dr Ram Sharan Mahat and other officials of the Ministry of Urban Development and the Ministry of Physical Infrastructure and Transport. The team also met office-bearers and executive committee members of the Federation of Nepalese Chambers of Commerce and Industry (FNCCI). They also met with the CEO of Nepal Investment Board, Economic Advisor to the Prime Minister, FNCCI, and private sector companies.

René Cougard, head of Regional Economic Service at the French Embassy in New Delhi, agreed that there is possibility for French investment in urban transport sector.  "The investment in Nepal depends upon political environment. If Nepal promulgate the new constitution in time and there restore political stability, investors will definite to come in Nepal," said Rene Cougard.

France has been supporting Nepal modernization of Nepal's Civil Aviation Sector. France provided aviation equipment to Nepal. In the decade of 1970, Air France helped to transform Royal Nepal Airlines pushing it to the jet arena.

India Tightens Security At Jamunah Checkpoint In Nepalgunj By Agencies 23 hours, 41 minutes ago