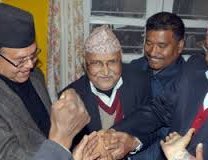 At a time when rival contender K.P. Sharma Oli is on a hospital bed at the Thai capital Bangkok, Madhav Kumar Nepal was also admitted in Bir Hospital for treatment of pneumonia and urinary infections.

As CPN-UML’s general convention is approaching, former prime minister Madhav Kumar Nepal and senior leader K.P. Sharma Oli have been vying for the powerful post of party president. Since Nepal and Oli were in hospitals, their supporters carried out the election campaign on their behalf.

In the heated election campaign, the incumbent party president, Jhalnath Khanal, is yet to take sides. He seems to be waiting for a second choice in case the competition between Nepal and Oli, both in hospital beds now, intensifies.

Madhav Kumar Nepal was born and groomed in a middle-class Brahmin family in Rautahat district, of the southern plains. Former prime minister, Nepal has many reasons to boast as his reconciliatory and flexible approach went to save the party’s core support bases all the time.

When the party was in the process of strengthening its base, it lost two important leaders Madan Bhandari and Jeev Raj Ashrit in a mysterious accident in 1994. The burden fell on Nepal, who took the leadership and pushed the party forward. Nepal and Oli were almost together in the party since the death of Madan Bhandari and Jeev Raj Ashrit, receiving the backing from Ishwor Pokharel, a strategic and second generation influential leader.

After taking the party leadership following the death of charismatic leader Bhandari, Nepal did not spare any time to fill the vacuum and led the party since 1994 till 2008 as the general secretary. He resigned taking the moral responsibility in the elections debacle for UML in 2008.

The defeat humiliated the party's rank and file.

That was when K.P. Sharma Oli’s retaliatory militant youth brigade Youth Force came in handy. It contained the growing influence of Maoists. Oli supporters argued that the rise of youth force was the main reason behind the revival of CPN-UML in the elections of November 2013.

As Oli supported Nepal all the time in the party, Nepal too backed Oli in all bids, including his last elections contest with Jhalanath Khanal for party president. Nepal and Oli fought all the battles in the party together with Jhalnath Khanal and Bam Dev Gautam.

Finally, they broke their long time intimacy after the Constituent Assembly elections of 2013. When Nepal supported a bid of Jhalanath Khanal for the parliamentary party leadership, the differences between Nepal and Oli reached the climax.

Oli joined communist movement from a very young age, getting involved in the infamous Naxalites Movement in Jhapa. He spent his entire young life in Nakkhu prison. Although a renowned constitutional lawyer of the era requested him to file the case in court, Oli reportedly declined to do so. He was released after the referendum of 1979.

Although personally Oli means business, Nepal is more flexible and reconciliatory. Many see Nepal’s reconciliatory and flexible role as submissive and unreliable. However, CPN-UML remained a main political force in the country's politics from 1990. Nepal has remained in the forefront all the time.

During the last two decades, CPN-UML went through various phases of internal troubles. However, Nepal was able to save the party from crumbling. It led the nine-month government before it was removed by a Supreme Court verdict in 1996.

The party joined various coalition governments until the break-up of the party in 1998 on the voting of Mahakali Integrated Treaty. Powerful faction led by Bam Dev Gautam had split the party taking all top brasses and heavy weights with him. However, Nepal was able to retain the party’s own base in the elections held in 1999 when it emerged as a main opposition party wiping out Gautam led CPN-ML. Although Gautam returned to CPN-UML after his failed experiment, founding general secretary of CPN-UML C.P.Mainali is still heading that faction.

Under the leadership of Nepal, CPN-UML was a part of seven party alliance which signed the 12-point agreement with Maoists. However, CPN-UML faced a humiliating defeat in the 2008 Constituent Assembly elections along with Nepali Congress. Nepal himself lost the elections in both the constituencies, Rautahat and Kathmandu.

K.P. Sharma Oli and many other heavy weights had lost elections too. But Nepal tendered his resignation taking a moral responsibility for the failure in elections.  Although his present rival K.P. Sharma Oli did not join the CA through nomination, CPN-UML sent Nepal as a member in the CA. Known for his conciliatory flexibility, major parties proposed him to chair the Constitutional Committee of previous Constituent Assembly.

Along with K.P. Sharma Oli, Nepal returned to politics winning from both the constituencies in Constituent Assembly elections of 2013.

Whether it was in the most troubled period or smooth time, CPN-UML leader Nepal has proved his mettle to lead the party. After the UCPN-Maoist's eight month old government, Nepal led a coalition government for almost 15 months. Sixty-one year old Nepal resigned as the prime minister in different political circumstances.

Nepal’s role was crucial to transform CPN-UML from an orthodox communist party to a liberal democratic setup. Although CPN-UML still adheres to the ideology of Marx and Lenin and finds it more comfortable with the communist alliances, the party is gradually transforming itself into a mass-based party.

Nepal is flexible and reconciliatory in pursuing compromises. However, Oli is rigid in his words and sticks to them. Since Nepal and Oli have had a long comradeship, their present rivalry has also divided their support bases.

At a time when Oli is under medical treatment in a far away hospital, Nepal is fortunate to have been taking rest in the presence of his octogenarian father and his family members. This is where Nepal learns the art of compromise, flexibility and reconciliation. This is the strength of Nepal in the coming convention of the party.

CPN-UML survived debacles of 2008 and is reviving. However, there are so many challenges before the party to retain its current state and strength. Only a leader with flexibility and compromise can make the difference. Nepal seems to be a choice alternative for the time being.

PM Deuba Wins Vote Of Confidence In HoR By Agencies 1 week, 5 days ago

UML POLITICS Divided We Stand By A Correspondent 2 weeks ago

MPs Have No Choice Other Than To Vote Deuba By Keshab Poudel 2 weeks, 1 day ago