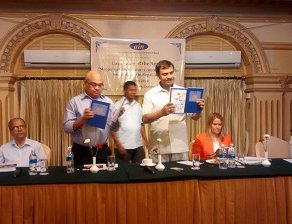 Often faced with severe criticism in the media headlines for inaction, INGOs have been unable to show the immense contribution they have made in various sectors of national development. However,  the recently released Mapping of AIN members contributing to the Health Sector in Nepal 2014 revealed the immense contributions made by INGOs in the health sector.

Out of 112 INGO members with Association of International NGOs in Nepal (AIN), 44 INGOs are working in the health sector in Nepal, collaborating with the Ministry of Population and Health and several other local level civil society organizations, health posts and district health offices. According to the report, they have been covering all 75 districts of the country working in the areas of reducing infant mortality, maternal mortality, HIV/AIDs, reproductive health, immunization, Acute Malnutrition and operational and research program.

Launched jointly by Secretary of Ministry of Health and Population  Dr. Praveen Mishra and AIN chair Ashutosh Tiwari, the mapping documented the functions of all 44 INGOs working in various sectors and various districts of Nepal.

Prepared by AIN Health Working Group, Mapping of AIN Members Contributing to Health Sector in Nepal 2014, is a compilation of information on INGOs support to Nepal’s health sector. “Almost half of our INGOs members serve in aspects of the health sector-from reducing infant mortality to taking care of the needs of the elderly to improving maternal health and the like, much needed development and affordable humanitarian services that necessarily fall in the cracks between what the market offers and what the government intends to do,” said Tiwari.

At the program attended by dignitaries from various Ministries, Social Welfare Council and Donor Community,  Shanda Steimer from USAID also spoke about the work of INGOs. Similarly director of Social Welfare Council hailed the role played by INGOs in health sector. “SWC is ready to work with INGOs and we are ready to provide the much needed support,” said Rimal.

According to the report, in Nepal’s health sector, 46 INGOs contributed over 45 million US dollars in 2013 and 52 million dollars equivalent support in 2014.

Nepal Approves SII’s ‘Covishield’ For Emergency Use Against Covid-19 By Agencies 2 hours, 14 minutes ago