My Bond With Ginkgo Biloba

Planting Ginkgoes in Nepal, a mass plantation, goes back to 2004, when we, Save The Environment Foundation (SEF), along with Love Green Nepal, planted around 300 Ginkgoes inside Tundikhel and Nepal Army pavilion. 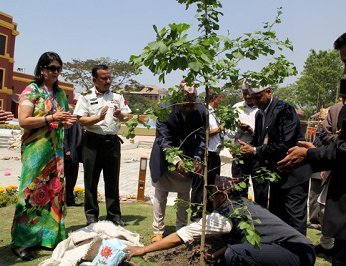 As I was taking a round of Sheetal  Niwas with President Dr. Ram Baran Yadav, planting  the world's  unique fossil tree on earth, the  ''GINKGO  BILOBA, '' I was overwhelmed with joy that my  dream to make ''Sheetal Niwas: A  GINKGO Palace'' could come true. Yes, as part of the dream, I was planting  these wonderful trees alongside the President.

No doubt this would make the place one of the unique historical palaces, the first President's  House with a mass  of Ginkgoes, around 169 trees, most being grown with saplings planted with the theme of "GREENING THE EARTH."

I found  President Dr. Yadav was keen on conservation as were all other staff at the President's House. They were all part of the initiative in choosing one of the unique species, which I had proposed. All the cost was borne by the President's Office.

Planting Ginkgoes in Nepal, a  mass plantation,  goes back  to  2004,  when we,  Save The Environment  Foundation (SEF), along with Love  Green  Nepal, planted around 300 Ginkgoes inside Tundikhel and Nepal Army pavilion. The little saplings which we planted are now almost fully grown up, adding more beauty  to the surrounding. We (SEF) constantly looked after these trees as they grew up. SEF has till now planted more than 4000  Ginkgoes all over the country, mostly at  Army  HQ ,  Kharipati Barrack,  various golf courses and other places.

Ginkgo  Biloba trees originally come from China. In fact, these trees are the national trees of China. Ancient Ginkgo trees were discovered in Tiantan village of Chengshan county. The first reliable source suggests the trees came to be known at the time of  Sung  Dynasty.  The oldest Ginkgo ovulate organs is dated back to about 170m years in the middle of the Jurassic  period. A 4000-year old  Ginkgo in  China is called the '' Chinese  Ginkgo  King '' .

An older  Chinese name for  Ginkgo is ''silver fruit '',  the apricot like fruit produced by female trees  which can be used as snacks, if taken moderately and served at special occasions such as weddings and the  Chinese New Year, a  dish called '' Buddha's delight '' .  These trees are regarded as sacred trees for making wishes, worship and prayers .

Ginkgo trees arrived in Japan with  Zen  Budhism in  the Kamakarma  Period.   These trees are called 'Bearer of Hope' as they survived the Hiroshima bombings. Six Ginkgo trees survived near the blast center and are still alive. They are preserved by rebuilding temples around it engraved with sings of “No more  Hiroshima Bombings.''  Hence these  Ginkgoes are regarded as official trees of  Tokyo and symbol of  the Ginkgo tree is  a Ginkgo leaf .

Ginkgo trees have been wildly planted around temples and trees alongside avenues in Japan for their magnificent “Autumn Gold'' which make trees  Golden throughout  the  Autumn. The Ginkgo Fall is worth watching. Ginkgo trees are prized for their  Autumn foliage which is deep  saffron yellow.

Ginkgo trees have been revered for their beauty and longevity. The only remaining fossil on Earth unchanged for more than 200 million years [ trees from the Jurassic  Period], which absorb high amount of  CO2 and have been prized for their reputed medicinal properties, is Ginko's .

Extracts from  Ginkgo leaves have been used as a memory and concentration enhancer and used mostly for dementia -- it is called  a brain tonic as it helps  blood flow.  The market for Ginkgo leaves are higher for its medicinal values.

Ginkgo adapts well to the Urban Environment, tolerating pollution and are excellent urban shade trees which look very ornamental when they turn ''awesome golden''  in Autumn. Hence, Ginkgo trees have been promoted world wide as Avenue trees these days .

While dating back in  history for  Ginkgo  Biloba in  Nepal, I have faint remembrance of people talking about the  Oldest Ginkgo trees being trans-located to Godavari, though the name of the trees was not mentioned at that time. However, people used to make remarks saying that the unique trees from  China were  being translocated and chances of their survival were slim.

Just a few months back, I came to know through an article by Sauravji in the  Koselee issue of  Kantipur that the  first  Ginkgo  Biloba trees were brought  and planted in Kathmandu by the Late Col. Harkha Jung Thapa, the first grandson of  Jung  B . Rana, from the Globe Nursery of Calcutta and stored at Dev nursery of  Babar  Mahal set up by Maharaja  Dev. Sumsher  Rana.

What a bond ?  I was thrilled knowing about the history of these  trans-located trees and here I was  obsessed with Ginkgoes. It added more value to  me because  Col. Harkha Jung Thapa, my   Great Grandfather, introduced  these Ginkgo trees in  Nepal.

I do respect Maharaja Dev Sumsher Rana for his outstanding vision and  contribution towards the  country and society though he ruled as PM for a very short period and his Dev Nursery played a major role for Greening the  Earth by importing rare trees from abroad.

It meant more to me like my great-grandfather Col. Harkha Jung Thapa, Dev Nursery and my passion for Gingko Trees. Most of my SEF ladies are his Granddaughters too and they must have felt the same as I did.  He who plants trees plants hope.

Why It’s In India’s Interest To Quell The Political Crisis In Nepal By Ranjit Rae 6 days, 15 hours ago