SADHURAM SAPKOTA, director of Nepal Peace Trust Fund and Joint Secretary at the Ministry of Peace and Reconstruction 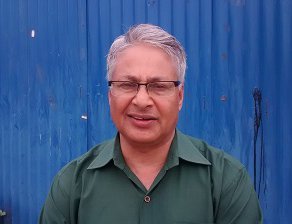 SADHURAM SAPKOTA, director of Nepal Peace Trust Fund and Joint Secretary at the Ministry of Peace and Reconstruction, has been working under the Ministry and taking part in almost all major decisions related to Nepal's peace process since 2007. As Nepal is in the process of reconstruction and rehabilitation, Sapkota spoke to New Spotlight on various issues while on an inspection visit of Kaski and Syangja. Excerpts:

As Nepal has already completed the integration of Maoist combatants and passed the act on reconciliation and disappearance, is the country in the stage of wrapping up the reconstruction phase also?

Yes, some important components of peace process have already completed. However, major portions are yet to be complete. For instance, the process of reconciliation and finding the whereabouts of disappeared persons is a lengthy process. Similarly, the reconstruction and rehabilitation of infrastructure is also another tedious work.

How is the ministry carrying out reconstruction work?

How do you see the progress in construction?

Since MOPR does not have technical expertise, how are you leading such a massive reconstruction work?

How do you see NPTF’s involvement in the reconstruction?

As Nepal Peace Trust Fund has fast track mechanism and the involvement of Nepal’s development partners, the government has decided to give the responsibility of reconstruction of police unit to it. NPTF has strong institutional mechanism to monitor the quality of work. The NPTF's monitoring system is very strong, it ensures the quality of works and there is no possibility for any delay in constriction. Given its strong institutional mechanism, it will be appropriate to continue the reconstruction of police units through the NPTF.

How long will it take to carry reconstruction work?

If there is adequate budget available,  the reconstruction work can complete within four years. In the work related to peace and reconstruction, there is the need to have fast track. Nepal Peace Trust Fund is the right institution which has been working under the fast track mechanism.

Where is the role of ministry?

The work of Ministry is to mobilize the resources and work as a coordinator. Since Ministry of Peace and Reconstruction does not directly involve itself in construction, we use the construction expertise available in the various other ministries.

How do you see the role of Nepal’s development partners?

After almost seven years, the Legislature Parliament has passed Truth and Reconciliation and Forced Disappeared Commission bill. Does it mean Nepal entered into another phase of peace process?

It is true that Nepal entered into another stage of peace process. We can say this is a phase of consolidation of peace. This is the time of reinforcing and sustaining the achievement made in the peace process. In the first stage, we had initiated many things. We have concluded integration process and initiated several other packages, including compensation for the victims and reconstruction of infrastructure destroyed during the conflict. We need to reinforce and consolidate the peace process in the second phase. We have already established the infrastructure for peace. I am not talking about the physical infrastructure but institutional mechanisms. In this phase, we need to work for sustainable peace. We need to be cautious not to relapse into the previous stage from the current stage of peace.

How do you see the TRC?

So far as the constitution of Reconciliation and Disappearance Commission is concerned, it has already been delayed for years. The time has now come to constitute the commission and it should be allowed to function. As part of Comprehensive Peace Agreement, it should have formed within 60 days of signing the agreement. There is also provision in the compressive peace agreement to investigate incidents of serious human rights violation during the conflict. As per the agreement, there is also a provision to punish those who involved in serious human rights violation and to offer compensation for the victims of conflict. Although the government has been making all efforts to constitute the commission as early as possible, it faced several stumbling blocks.

How capable is the Ministry to handle the process?

Since we have developed various mechanisms for the peace process during the last seven years, they are the assets for the coming days. We have the peace committees at the district level and other mechanisms. They will definitely help the commissions to complete its task.

Japanese People Have A Special Sense Of Intimacy Toward Nepal: Ambassador Yutaka Kikuta By Agencies 6 months, 2 weeks ago

Tokyo Olympic Committee Is Now Preparing For The Coming Summer By Keshab Poudel 7 months, 2 weeks ago

“Nepal Is A Crown Jewel For Humans Because Of Its Geographic Treasure” Professor Tomohiko TANIGUCHI By Keshab Poudel 7 months, 3 weeks ago