The Young Gun That Misfired

Merely two years down the line, all such hopes have gone down the drain. What was expected to be a more prosperous and peaceful tenure has turned out to be a more dreadful one. 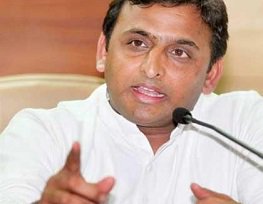 When he was elected the Chief Minister (CM) of what was often referred to as the most ‘unruliest’ state of India, Akhilesh Yadav brought a glimmer of hope to Uttar Pradesh (UP). Elected as the youngest CM in the Indian history, Akhilesh rose to power with the mandate of modernizing the ailing state. Along with suffering from a high rate of crime, UP suffered from all sorts of problems; it was a budding ground for hooliganism, corruption was rife and the state fared poorly in social rankings. A University of Sydney graduate, the new CM’s modern upbringing was expected to play a big role in ushering a more prosperous UP compared to the dreadful tenure of his father Mulayam Singh Yadav and the heavily corrupt tenure of another former CM Mayawati.

Merely two years down the line, all such hopes have gone down the drain. What was expected to be a more prosperous and peaceful tenure has turned out to be a more dreadful one. Marred by numerous cases of crimes, Akhilesh’s tenure has turned out to be a big disaster. Data published earlier this month by the National Crime Records Bureau (NCRB) showed that UP fared the worst in terms of law and order situation in the whole country. The state has indeed become a crime den.

The extent of recent lawlessness in India’s most populous state came into focus after the rape of two teenaged Dalit girls at Badaun last month and the string of rape cases that followed subsequently. Although cases of women violence have been on the rise in the state since several years, the recent spurt of such incidents shows that the situation has become even worse under the Akhilesh rule. According to the NCRB, nearly 2000 rapes were recorded in the year Akhilesh took charge of the office. Post the Badaun rape case 5 more rapes were recorded within a span of just 36 hours.  This is a big letdown from the young Samajwadi Party (SP) leader who had promised better security for women during his election campaign.

But this is not the first time that Akhilesh’s unruly governance has come to the forefront. He started drawing flak right from the beginning. As an architect of his party’s thumping victory during the state elections, one of the junior Yadav’s core agenda was improving the law and order situation. Instead, the rate of crime has shot up. Almost 34,000 cases of crime including rapes and murders were recorded; an increase from the previous record of almost 33,000.

Ironically, outlaws made up more than half of his council of ministers.  Instead of curbing crimes, all these ministers have done is draw headlines for their idiosyncratic behavior. Last year, Minster of Textile and Industries Shivkumar Beria professed that police in the state were his puppets and they couldn’t even ‘sit without his permission’. In another instance, Minister Ram Murti Verma said that lawlessness was an integral part of UP and it could not be curbed. Senior Minister and noted goon Azam Khan created a big stir when he dispatched teams of security personnel for a massive hunt of his missing cattle.

Violence, as a result of caste discord, communal disputes and political rivalry has also seen a rise under Akhilesh’s rule. The Muzzafarnagar riots last year took  the lives of  70 people. Indicted even by the Supreme Court for its failure to control the riots, it was later reported that many of the perpetrators were living under the protection of SP leaders. The state has also already witnessed more than five other cases of communal riots including one in the commercial city of Ghaziabad in the last two years. The police’s refusal to register case against the perpetrators in the Badaun case primarily because they belonged to the upper ‘Yadav’ caste shows the caste discrimination.

In letting law and order slide, Akhilesh is not only turning the clock back on UP's development, but also bringing back the dangerous traits of his father’s rule in. His complacency and denial over the rising rate of crime shows that despite all the modern talks, Akhilesh remains a traditional leader groomed with the typical SP’s values. There is no way for him to bounce back from all the debacle now. Junior Yadav has already lost ground for the next elections in the largest state of India. Since the state is so crucial in making or breaking the fortune of the leaders aspiring to make it big in the national politics, the 20th chief minister of  India's most important state has lost the plot. Age may be on his side but the young gun has not only failed to fire but misfired as well. His failure has coincided with the hurricane rise of a charismatic, even though divisive, 60-plus state leader to the national and international prominence to become the 15th prime minister of India. As for Nepal, a deteriorating law and order situation in its bordering Indian state definitely spells bad news. This might lead to some serious security concerns.