Despite the pledges from Prime Minister Sushil Koirala and foreign minister Mahendra Pandey to appoint the heads of the diplomatic missions, the process has yet to start 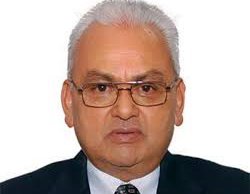 Nepal's foreign ministry has remained without the full time foreign secretary for almost eight months.  Since the appointment of Durga Prasad Bhattarai as the head of the permanent mission in New York, the foreign ministry is under officiating secretary Shanker Bairagi.

Although Nepal's mission in India is highly important in every respect, the mission has been under the charge d' affaires for almost four years. Fifteen missions have been running their affairs without the ambassadors for several months.

Had some provisions been incorporated in the last amendment of the Civil Service Act, officiating secretary Bairagi would have been promoted as acting foreign secretary. Despite hard efforts of foreign minister Mahendra Pandey, no one took the agenda seriously to incorporate the proposed amendment clause of the Ministry of Foreign Affairs.

Sandwiched between Asia's two rising powers, Nepal is in a very delicate situation in its handling  of foreign affairs. Almost all Nepalese missions abroad, particularly the missions in Gulf countries, are very important as Nepal's economy heavily relies on remittances originating there.

The urgency is not reflected in the priority of Nepal government. Although CPN-UML leader Mahendra Pandey is heading the Ministry of Foreign Affairs, he seems to be handicapped in appointment of the heads in Nepal's missions and promotion of Bairagi as acting secretary.  Although officials working in the foreign ministry have specialized tasks and roles, there is no separate provision in the current Civil Service Act about these aspects.

The appointment of ambassadors and secretaries is a normal process in any country around the world. Few notice the routine work, but this is not the case with Nepal. Whenever the issue of appointment emerges, it makes a national headline in the country's major newspapers.

So far as the career diplomats of Ministry of Foreign Affairs are concerned, they are rich in experience and knowledge of working in the diplomatic missions.

Although the Ministry of Foreign Affairs regularly appoints and transfers deputy chief of mission and others in the mission on the basis of certain criteria, including merit and seniority (how long he or she served in the Ministry), few people notice the process. There is rarely any controversy or speculation on such appointments. However, the recent controversies, speculations and delays in appointment of ambassadors  are making the news.

Had the ministry followed its own criteria and seniority system developed for other staff in the appointment and transfer in the foreign missions, Nepal's missions would not have gone without their chiefs. The general practice is to appoint senior joint secretaries as the ambassadors.

According to the general practice, a 50-50 share between political and career officials working in the Ministry of Foreign Affairs is maintained in envoy appointments. If this happens to the case next, the Ministry of Foreign Affairs will have a share of 8 ambassadors in eight different missions. The remaining posts will filled by political appointees.

If the government follows the criteria and practices, selecting joint secretaries as ambassadors on the basis of seniority (first come first) will not be a big deal. Since his appointment, Minister Foreign Affairs Mahendra Pandey has been reiterating that appointment of ambassador is his priority, but it is yet to materialize due to several reasons.

In his recent interview to the Gorkhapatra Daily, Minister Pandey said that he will proceed with the appointment process. As prime minister Sushil Koirala is out of the country for medical treatment, the process is pending.

As the foreign service is specialized in nature, it requires separate foreign service act to make the ministry more flexible with autonomy to cater to the needs of the day. However, the recently tabled Civil Service Amendment Bill has proposed certain special criteria for Ministry of Foreign Affairs to open a way to promote senior joint secretary as a secretary of Ministry of Foreign Affairs. However, the act is still inadequate.

As the long overdue process of appointment of ambassadors has already sent a wrong message around the world, the time has come to fill the vacant missions abroad.

REINSTAMENT OF HOUSE Coalition Politics By A Correspondent 2 days, 18 hours ago

PM Oli To Face House Of Representatives By Agencies 6 days, 19 hours ago