If the recent political alliances provide any indication, it shows that Nepali politics is heading on the path to confrontation 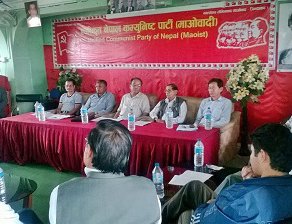 In this Avatar, UCPN-Maoist leader Prachanda found allies in the regional and ethnic parties to press for an identity-based autonomous federalism. Prachanda first forged an alliance with the radical communists and then allied with all top Madhesh based parties and ethnic parties represented in the CA.

“Since Nepali Congress and CPN-UML are trying to promulgate the constitution without recognizing identity, we are compelled to form an alliance against the two anti-federal parties,” thundered Prachanda.

Madhesh parties believe that communists are anti-Inidan and thrive in opposing India. UCPN-Maoist is also part of a broader communist alliance, which was formed to oppose any agreement with India on water resources.

UCPN-Maoist opposed the proposed draft sent by India for broader Water Resources development. “Our party is against any kind of unequal treaty with India on water resources. Our stand against Mahakali Treaty continues,” said UCPN-Maoist leader Leela Mani Pokharel.

These kinds of alliances are not the last for UCPN-Maoist. In recently held elections, CPN-UML also saw a drastic shift in the internal political alliances. The establishment factors led by Madhav Nepal and K.P. Sharma Oli fought neck to neck with backing from splinter group led by Deputy Prime Minister Bam Dev Gautam, who split the party on the ground of signing Mahakali Treaty.

Nepali Congress leader and Prime Minister Sushi Koirala have a broader alliance in the cabinet where he has more ministers from splinter groups rather than his own establishment.

Condemning the budget presented by finance minister Dr. Ram Sharan Mahat, Nepali Congress MP Amaresh Kumar Singh showed that there doesn’t need to be an opposition in the parliament and he can ally with the opposition to oppose his own party’s budget.

The recent political phenomenon is nothing new in Nepali politics. However, what is strange is the timing of the alliances. In the past, rightists RPP and leftist CPN-UML joined the government against Nepali Congress. Similarly, radical Maoists and seven political parties joined an alliance against monarchy.

Nepali politics has a long history of making and breaking strange alliances. There is no left and no right in politics.