As Nepalese are evaluating their own country’s current status with a dose of cynicism, Hans Rosling, the world’s renowned data guru, sees Nepal’s progress in social sector as much higher than those of the top developing countries 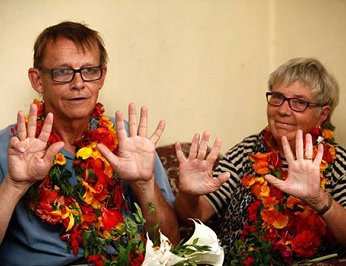 Hans Rosling needs no introduction. The soft-spoken Swedish doctor surprised the Nepalese when he declared that Nepal’s social progress is at a much higher level than that of South Africa, a region of high economic growth.

"Nepal is the world champion in child health with its level of economy," said Hans. "Heroes of Nepal - female health volunteers, women of paralegal committees, community members - welcome to the modern world. Nepal, you have made it,” said Hans in an hour-long discussion on Investing for Children in Kathmandu.

At the function organised by National Planning Commission and UNICEF, Hans commended Nepal’s extremely high progress in social sector, particularly the achievement made by Nepal in reducing child and infant mortality and in fertility of women.

Hans is not a new comer.  He visited Nepal along with his wife 42 years ago. He still remembers the state of Nepal then and how his wife and he visited Sundarijal and Melamchi at that time.

"I´m back in Nepal 42 years after my first visit. Meanwhile, the child mortality has dropped from 25 to 5% (1 out of 20) and fertility rate from 6 to 2.5 babies/woman. I am pretty sure to see the grand children of the person who received us 42 years ago," said Hans.

Not only addressing the program, the world renowned stats guru Hans Rosling played peek-a-boo with students at an early childhood development centre in Chatrebas Village Development Committee in Kavre District

Rosling is a known name among statisticians globally, and has been invited to speak in many countries around the world, including many international forums. His  vivid presentations are widely attended by people from different walks of life. The presentation “Investing for Children” focused on Nepal and its comparison to the global context. Rosling compared trends in health, education and the overall wellbeing of women and children and also showed where we are headed in the  years to come.

Hans Rosling is a Swedish medical doctor, academic, statistician and public speaker. He is Professor of International Health at Karolinska Institute and co-founder and chairman  of the Gapminder Foundation, which developed the Trendalyzer software system.

Hans's research has also focused on other links between economic development, agriculture, poverty and health. He has been health adviser to WHO, UNICEF and several aid agencies. In 1993, he was one of the initiators of Médecins Sans Frontières in Sweden. At Karolinska Institutet he was head of the Division of International Health (IHCAR) from 2001 to 2007. As chairman of Karolinska International Research and Training Committee (1998–2004) he started health research collaborations with universities in Asia, Africa, the Middle East and Latin America. He started new courses on Global Health.

Playing the global data, Hans compared Nepal’s social progress with different countries of the world.  Hans showed that Nepal is not lagging behind. “Nepal’s social progress is amazing. However, it needs to double its GDP by investing in the infrastructure. One does not need a lot of variables to interpret the state of development of a country. In this day of big data, how can an intelligent consumer of public policy keep a mindset that is open to using statistics to understand the world around him. Most  low-to medium-income countries around the world are better on social indicators today than on financial indicators.”

Empowering Communities To Improve Quality of Education In Nepal By Keshab Raj Bhatta 1 day, 23 hours ago

IGP GYAWALY Simple Mantra By A Correspondent 3 days, 19 hours ago

DEFENSE MINISTER IN KALAPANI Conciliation or Provocation? By A Correspondent 4 days, 19 hours ago