SURESHMAN SHRESTHA, secretary at the Ministry of Cooperatives and Poverty Alleviation, has a long experience of working in the civil service. Before coming to the present ministry, Shrestha served at the Ministry of Education and Labor and Employment 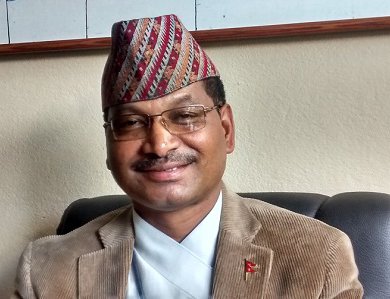 Although this ministry has an extensive scope, how well is your ministry doing? That is, how do you look at the role of your ministry?

Realizing the role of cooperatives, the government established this ministry on Jestha 5, 2069 BS. However, our weakness is that we are unable to perform on a fast track. Although there was a ministry of cooperatives for a long time, it was under the shadow of the Ministry of Agriculture. With the announcement of the three pillar economic policy of the government, giving priority to the cooperative sector, this ministry was established. Establishment of this separate ministry was itself a major step. The vision behind this ministry is that only through qualitative cooperatives, the mission to achieve poverty alleviation will be possible.

How do you see Poverty Alleviation ?

Before the formation of the government, the Poverty Alleviation Fund was established under an act in 2061. The chairman of the fund is prime minister and the fund is under the prime minister's office. There is Youth and Small Business Self Employment Fund under the Ministry of Finance. Both the offices are running the programs through the cooperatives. To make the ministry effective and functional, both the funds should be brought under the umbrella of the Ministry. In the last almost two and a half years, chairman of the council of ministers and now prime minister is heading the portfolio of this Ministry.  This is so due to technical reasons. As the prime minister has to handle other important tasks of the nation, this ministry does not get adequate priority. Initially, there was a full-fledged minister under the ministry from a small party. During his period, he took many initiatives to make the ministry functional. As cooperatives are the backbone of national economy and poverty alleviation, the ministry needs a full-fledged minister.

How many cooperatives are there ?

Some 30229 cooperatives have already been registered in the country by April 2014. There are so many cooperatives and the role of the ministry is to regulate and monitor their activities. At a time when so many complications are coming, the role of ministry is more important. The ministry needs to work with high priority. There is the need to amend Cooperatives Act 1992. When the act was promulgated, there were just 833 cooperatives.  In thirty years, the number of cooperatives has increased by many folds. This ministry has a wide scope now and poverty alleviation is a cross-cutting issue. Since the cooperatives have played a very important role in poverty alleviation, there is the need to have a better policy coordination. Poverty alleviation is also linked to other ministries. Giving high priority and importance, the government established the ministry. However, it is yet to infuse the same spirit in the continuation. As poverty alleviation is the national agenda and main thrust of the government, this ministry has a lot bigger role to play. After the amendment of the existing act, the ministry will have more role to play by developing its activities. However, we are now in the early stage.

As the agenda of poverty alleviation is a broader issue and issue before all the major stakeholders, how do you look at this goal?

The first and foremost is the need to enhance the internal capacity of the ministry and we need human resources and expertise to handle the present complexities. This is a pervasive issue. In the present context, we cannot go ahead.  We need to go slowly by learning from the present situation.

At a time when the number of cooperatives is increasing, how is the ministry handling the situation?

I have already told you that there is the need to enhance the capability of the ministry as well as cooperatives, Registrar's office and Division Cooperatives Office.

Time To Sketch Export Management Approach: Aryal By A Correspondent 2 weeks, 6 days ago

“Luxembourg And Nepal Have Been Nurturing Friendly And Close Relations for Over 4 Decades “Ambassador Jean Claude Kugener By NEW SPOTLIGHT ONLINE 4 months, 1 week ago