Since the establishment of relations fifty nine years ago, Nepal and China have maintained their friendly relationship all the time 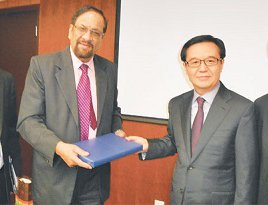 At a time when Nepal is desperately searching funds for the infrastructures projects, Nepalese Finance Minister Dr. Ram Sharan Mahat visited China, Nepal’s northern neighbor, seeking help. He achieved what he wanted. To address trade related issues, Finance Minister Dr. Mahat proposed to the Chinese side to activate the joint mechanism during his meeting with Chinese commerce minister Gao Hucheng.  Both sides agreed to do so. The mechanism had remained defunct for the past seven years.

“My visit to China was highly successful and it will have multi-dimensional positive impacts on the bilateral relations between the two countries in the days ahead,” said Finance Minister Dr. Ram Sharan Mahat, while addressing a program organized by Nepalese Embassy in Beijing. "I am very encouraged by the high-level talks with the Chinese Finance and Commerce ministers after a long time and hope that the talks would help resolve the business issues of the two countries, increase Chinese investment and support in the overall development of Nepal, and assist us to move ahead learning from China’s progress.”

Minister Gao Hucheng announced support for the landslide victims of Sindhupalchowk. The landslide site is located near Nepal´s border with China and the Araniko highway-- the trade route with China-- is blocked because of the landslide.

The minister also pledged to provide support to the victims through the government of Nepal.  Prior to the meeting with commerce minister Gao Hucheng, finance minister Mahat had met with his Chinese counterpart Lou Jiwei.

Whenever Nepal faces economic, humanitarian and natural crisis, Nepal’s northern neighbor China comes with the proposal for support. This time also, it was no exception.

In his message to prime minister Sushil Koirala, Chinese Premier Li Keqiang offered aid and necessary support to reconstruct the damaged road and clear the landslides. Although China itself is facing a big earthquake in Yunnan province, the Chinese prime minister has shown his concern for its neighbor.

"The Chinese government stands ready to provide all-out support to Nepal's disaster relief efforts and all necessary aid within its capacity to Nepal," Chinese Premier Li Keqiang said in a message of condolence to his Nepalese counterpart Sushil Koirala issued on August 4. Li also expressed condolences to the victims and sympathy to their families and the injured.

Chinese officials are also pushing the agenda for Nepal’s economic development and investment in Nepal’s various sectors, including hydropower construction, tourism and infrastructure. Tourism entrepreneurs expects that Chinese tourists are likely to reach 250,000 within the next couple of years. According to Nepal Tourism Board the number of Chinese visitors doubled to 89,509 in 2013, up from 46,360 in 2010. Arrivals from China in 2012 had reached 71,861.

“Chinese tourists would reach a quarter-million-mark in a few years, with increased flights between two countries and land connectivity with Rasuwa and cross Himalayan roads,” said Chinese ambassador Wu addressing a program to mark 59th anniversary of diplomatic relations between Nepal and China.

The rapid growth in Chinese arrivals is illustrated by the recently revised air services agreement (ASA). The new ASA permits Chinese carriers to operate 56 flights a week with any type of aircraft. Earlier, Chinese airlines were allowed to operate 14 flights every week.

“Despite more than 40 degree centigrade of heat, Chinese tourists reached Lumbini because it is the birthplace of Lord Buddha,” said Chinese ambassador Wu recalling his meeting with Chinese tourists in Lumbini.

Starting from scratch, Chinese investors are gradually coming to Nepal. In the last few decades, Chinese companies are aggressively investing money in hydropower sector as they have already financed some projects with almost 75 MW. China has also emerged as a big source of foreign direct investment (FDI) to Nepal.

“Nepalese leaders are also asking Chinese to come and invest in Nepal.  There is the need for enhancing economic relations between the two countries, stating the relations in the current age are focused on economic issues,” said former Prime Minister and senior UCPN (Maoist) leader Baburam Bhattarai. “China Railway, which is extending to Shigatse, must arrive to Nepal and there should also be increased road and air connectivity to increase trade and investment.” As both India and China are talking about making the 21st century the era of Asia, Nepal should be a vibrant nation between the two economic giants to benefit from their economic development.

Global Times, a Chinese newspaper, said Chinese government is planning to extend Qinghai-Tibet Railway to Nepal by 2020. This will increase the connectivity with Nepal’s northern neighbor.

As Nepal and China have already celebrated 59 years of establishment of bilateral relations, their relations remain stable and trouble free.  “China’s policy of non-interference in internal affairs of another country has helped solidify the relations."

NEICHU MAYER: Honored With Cause By NEW SPOTLIGHT ONLINE 3 hours, 21 minutes ago

Gautam Buddha Was Born In Lumbini,Nepal By NEW SPOTLIGHT ONLINE 1 day, 16 hours ago

Prachanda And His Group’s Activities Are Disgraceful: DPM Pokharel By NEW SPOTLIGHT ONLINE 2 days, 3 hours ago

Call For A Broader Collaboration To Stop Human Trafficking During COVID-19 Pandemic By NEW SPOTLIGHT ONLINE 2 days, 21 hours ago

FLOOD Crying Of Children By A Correspondent 3 days, 2 hours ago

Koteshwor Sealed Off After Detection Of The Cases Of COVID-19 By NEW SPOTLIGHT ONLINE Aug 11, 2020