The cold Winter after Spring

A major reason for this is the fundamentalist Islamic values persisting in the region. Islamic political groups in most of the Arabian nations tend to share intolerant political values which are often extreme and uncompromising. 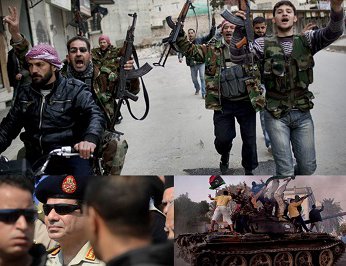 In the latest outbreak of violence in the war-torn Libya, 22 people were killed in the fighting between rival militias vying to take control of the capital's international airport. Most of the Western countries evacuated their embassies and the airport was closed down amidst growing violence. Despite a new government at the centre, the recent fighting has reignited fears of an all out civil war in the OPEC nation.

Libya is not the only country which has been plagued by bitter infighting post the (in)famous Arab Spring. Three years after the uprising began in the tiny nation of Tunisia, most the countries which saw angry protests against their dictatorial regimes lie in shambles. In Egypt, protests against the elected president Mohamadd Morsi’s authoritarianism led to the reverting to military rule with General Abdel Fattah el-Sisi at the helms. The death toll in Syria’s three year long conflict has climbed past 160,000. Despite the promulgation of a new constitution, Tunisia is on the edge. Islamist fundamentalists have carried out attacks against members of parliament, electoral laws have been changed to allow former officials from the dictatorial regime to run for office and many former government leaders have been released from prison.

So what has gone wrong with the Arab world’s experiment with democracy? Will the region ever see a free, fair and a representative political system?

Chances are unlikely. A major reason for this is the fundamentalist Islamic values persisting in the region. Islamic political groups in most of the Arabian nations tend to share intolerant political values which are often extreme and uncompromising. Because they regard their rule as God-given and supreme, they are often undemocratic in nature. Democratic institutions and practices such as courts, freedom, power sharing mechanism and a well representative constitution to protect minorities are thoroughly rejected. Egypt is a case in point. Despite being a party formed on religious grounds, the Muslim Brotherhood rose to power -- although amidst scepticism. President Muhammad Morsi became the first democratically elected President in the country’s history. He got off to a good start, much to the joy of many. But six months into power, Islamic fervour slowly started to show. Constitutional judges were stripped of all powers. The constitution was drafted solely by Islamic leaders. Brotherhood officials denounced the minority Shiite practices and declared that the sect had no place in the country. Many accused Brotherhood of engaging in the process of "Ikhwanization"; forcefully imposing Islamic values on the system. This infuriated the liberal Egyptians. Eventually, the military assumed power after mass protests erupted against the elected President.

Years of repression and dictatorial rule are also to be blamed for the post-uprising upheaval. When dictators are overthrown after a long authoritarian rule, a vacuum is created. What ensues is infighting mainly within the groups who fight united but fall out when it comes to the question of who is to acquire power to fulfil the vacuum. In the case of Arabian countries, the intra group conflict became even more severe due to the vast oil reserves and the struggle to gain control over them. Libya is a victim of such a situation. After more than four decades of totalitarian rule, Muammar Gaddafi was overthrown by an armed revolution. However, for citizens of the country with the largest oil reserve in Africa, the overthrow of the dreaded leader was just the beginning of another dreaded era. As many as six powerful armed groups got affiliated themselves to the state and seven others powerful armed groups cropped up to fight the state. Fighting erupted even amongst the rebel groups. The result has been internal strife which is slowly taking the shape of a deadly civil war.

An undeniable factor that plays a vital role in such turmoil is the external influence. Despite a three year conflict, the Syrian regime of Bashar Al Assad has not stumbled thanks to the strong support it enjoys from powers such as Russia, China and Iran. With little interest in the country (the US imports very little oil from Syria), the West has been relatively soft in their approach. They have neither supported the rebels wholeheartedly nor staunchly rallied against the Assad regime. Instead, a few officials in the Obama administration have suggested privately that now might be the time to consider cooperating with Syrian President Bashar al-Assad to counter al Qaeda-linked fighters who have seized large swaths of Syria. Consequently, the country has failed to make any progress and continues to suffer.

The Arab spring spread like a wildfire with high hopes. But three years down the  line, all such hopes have been belied. The uprising which removed the long standing rulers, has paved way for other dictatorial leaders to rise up. The future of the Arabian countries now remains uncertain.

US President Trump To Arrive Today In India For Two Days Visit By NEW SPOTLIGHT ONLINE 4 days, 23 hours ago