"There Are Gaps In Our Climate Change Response"

As the rainy session is reaching halfway to its peak, GEHENDRA BAHADUR GURUNG, head of the program on Disaster Risk Reduction and Climate Change of Practical Action-Nepal spoke to NEW SPOTLIGHT on various issues. Excerpts: 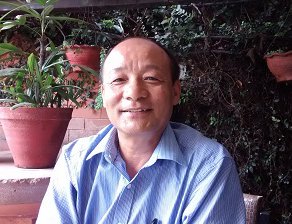 As Nepal is one of the vulnerable countries, how do you assess the disaster preparedness in Nepal?

Among the various seasons, Monsoon is one of the most disaster prone seasons of the country. We have been organizing disaster preparedness workshops and disaster preparedness planning since last many years. The government has already institutionalized this kind of system. Government has been organizing district level and national level disaster preparedness program every year. In this way, what I can say is that Nepal has made certain preparations for the disasters. The present preparedness is mainly for action. We are preparing for the scenario when the disaster affects the life and property of the people or it is rescue oriented. Actually, we need to have preparedness for mitigation. We are still unprepared in case of heavy rains and disasters. We need to make programs for the mitigation, looking at the data produced by Meteorological Forecasting Division. For instance, if the prediction is for more than average rainfall in the year, we need to work out a mitigation program to cope with the situation. If there is a prediction of less rainfall, our mitigation should be directed accordingly. As per the prediction of Meteorological Forecasting Division, there was below normal rainfall and drought because of the delay in the monsoon. However, we are unprepared for this. There is the need to have more preparedness for mitigation.

Climate change is likely to intensify the disasters, is Nepal taking precautionary measures?

We have now plans, policies and strategies to face the disasters. For the government policies, plans and strategies are very important. If they are in place, the government can go for their implementation. Now we have strategies and policies and we have NAPA and LAPA as adaptation plans. We have policy documents in the take off stage. The time is now to go for implementation. In terms of climate change, there are constraints of funds. Ultimately, we cannot execute the plan without funding. Through the climate negotiations funding, Nepal has been receiving certain funds. For instance, LDC Fund will be there to implement the NAPA. There are plans and policies but what Nepal needs is detailed documents. So far as my information tells me, the government is preparing the work plan to acquire the fund for implementation. DFID and European Union have been funding some of the programs with amounts over 17-18 million pound. They are being implemented as a pilot project. However, the pace of impact of climate change is much higher than the pace of preparedness.  There is the need to increase the preparedness.

How do you the see the gap in the DRR and Climate Change?

Practical Action has been implementing early warning system in mid-western region, don't you think it can be replicated in other regions also?

We can replicate in other parts also. It is based on technology and it has already proven its justification. We have already proved that life and property can be saved through the early warning system. It is pilot tested and proven. If the rivers have similar characteristics, we can replicate them. One of the constraints is the lack of river gauge. There is the need to have the river gauge in various rivers for people downstream to know the level of water. If we can provide the information like in Rapti, Babai and Karnali, early warning system can be replicated in any part of Nepal. There is the need to have capital investment to build the infrastructure and there is the need to increase technical capabilities to assess the situation. There is need of flood mapping. We can use this in all the parts of terai. The challenges now relate to early warning, in mountains and hills because the characteristics of rivers are very different in these two ecological zones. Unlike in terai, the speed of rivers is very high in the hills and there is the need to do more work there. The technologies we have been implementing in terai or plains are replicated in all terai but there is the need to conduct more studies to replicate it in hills and mountains. There is the need of further piloting.

If so how has Practical Action been supporting the concerned government agencies?

The government has already accepted flood early warning as a major strategy. Government documents have been speaking about the early warning system but the document is yet to speak on how it should be replicated in broader terms. The current documents just say that flood early warning system is replicated and implemented but it is yet to speak how should it be replicated? Where will resources come from and how will it be implemented? There is the need to have another detailed strategy for it.

As climate change is going to affect the agriculture system in Nepal, what do you suggest for farmers?

We have recently conducted a study on economic impacts of climate change and   agriculture is one of the sectors of the study. As you mentioned, agriculture is one of the most vulnerable areas of climate change. If there is an extremely adverse effect of climate change in the agriculture, our economic loss in one session will likely be 1.9 percent of GDP. It has such a huge impact on agriculture. There exist certain technologies which need to be promoted. Water resources management is one of the important factors, as water resources are likely to be affected by drought, high rainfall and low rainfall. In this context, water management is very important. We need to promote irrigation facilities in the areas where it is possible and we also can avoid adverse impacts on the agriculture. Flood management can be possible through flood early warning system which we already have. The technologies are available for soil moisture management, drought tolerant crops, pest management and low chemical management. These technologies are already there. If we promote these technologies massively, we can avert the long term implications. However, in the short term, the government needs to mainstream the climate change. It should be linked with each other as to how it can affect and how they can be incorporated to minimize the impact. In the long term, the climate change is unpredictable as there will be good and bad things happening. We need to observe how it will play out in the future through reiterative management. We are not in a position to say how likely it is to affect our system in the next 50 years?

How do you see the community's response to climate change? Where do the programs run by Practical Action stand in this regard?

People at the community levels have been observing the effects of climate change as their own knowledge. They have been responding to it. For instance, maize is now emerging as a commercial crop in terai. As there is an increase in the days of cold temperatures in December, the farmers started to think about it. As soon as they cut the paddy, the farmers grow the maize. As high breed crop, the maize can easily adapt to the cold wave in terai. Soon after the warming-up of the temperature, maize starts to grow. The farmers have learnt to avoid the cold temperatures. The farmers have their own adaptation system. We need to promote this kind of crop and reduce the impacts of climate change. Practical Action has been taking climate change as a cross cutting issue as it will affect energy and agriculture. Practical Action has been implementing programs like Food Security, Water, Energy and Urban WASH Sanitation and Disaster Risk Reduction (DRR) and we have been incorporating climate related programs in works being implemented at the community level.