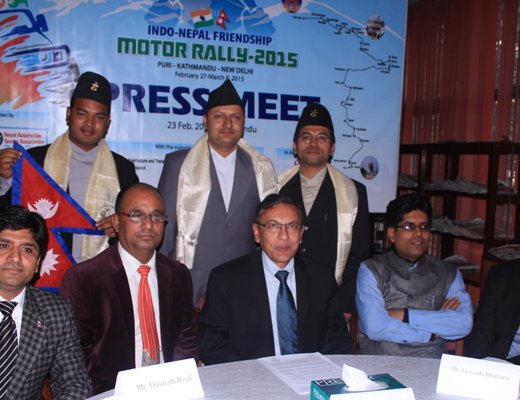 Before reciting his poem, Prakash Sayami shared, “Nepal-Bharat Library is one of the most prestigious places for all the senior litterateurs of Nepal. Mahakabi Laxmi Prasad Devkota himself was a member of this library and had influenced many to become a member here and contributed in expansion of reading habit in Nepal.”

Secretary of B.P. Koirala India-Nepal Foundation, Abhay Kumar presented token of appreciation to all the participating poets. He said, “One of the goals of Poemandu and other regular programmes organized by B.P. Koirala India-Nepal Foundation is to bring back the readers who used to come here regularly, decades ago. Listening to Prakash Sayami and Krishna Murari Gautam, I think these programmes have succeeded in bringing back many of them.”

Embassy of India and B.P. Koirala India-Nepal Foundation is organizing 19th edition of Cinemandu: Screening of Nepali feature film Baato Muniko Phool on Monday, October 20, 2014 at 4 pm at Nepal-Bharat Library. Entry to the screening is free of charge.

Balen Shah Leading The Race with Over 4500 Votes By NEW SPOTLIGHT ONLINE 3 days, 8 hours ago