Yair Shamir, Minister for Agriculture and Rural Development of Israel wrapped up his two day official visit to Nepal. Minister Shamir expressed satisfaction over his successful Nepal visit. “It has been a very fruitful visit and I’ve met many inspiri 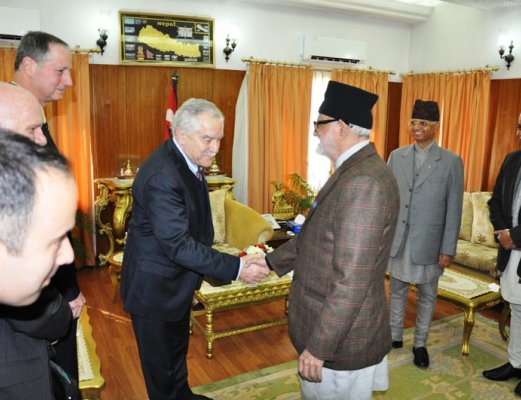 Yair Shamir, Minister for Agriculture and Rural Development of Israel wrapped up his two day official visit to Nepal. Minister Shamir expressed satisfaction over his successful Nepal visit. “It has been a very fruitful visit and I’ve met many inspiring people”, said the minister.

During his two day historic visit to Nepal, Minister Shamir met his Nepali Counterpart, Hari Prasad Parajuli, Minister for Agricultural Development, and discussed the possible cooperation between the two countries in the field of agriculture.

“We are looking into the possibility of establishing agricultural demonstration farms in Nepal, so that we could share Israeli agro-technology more easily”, said minister Shamir.

“There are currently more than 500 Nepali small farmers in Israel, who are enjoying the opportunity to learn about Israeli agro-technology as well as implement the knowledge in the field, while earning money in the process, money that upon returning to Nepal could help the farmers to invest in new technologies for their farms,” said a press release issued by Embassy of Israel.

During the meetings, discussions were made on further strengthening the already existing friendly relations between the two nations and the possible economic cooperation that may arise in the future in the field of agriculture.

He further invited Minister Parajuli to grace the Agritech International Agricultural Technologies Exhibition that will be held during 28-30 April 2015 in Tel Aviv, Israel.

The minister was accompanied by the head of Israel’s Agency for International Development Cooperation (MASHAV), Gil Haskel.

“Whatever technology Israel has developed - we are ready to share with Nepal”, said Haskel. Over 3,000 Nepali professionals have already undergone advanced training in MASHAV centers in Israel in different fields, and dozens are receiving scholarships from the Israeli government every year.

Minister Shamir also jointly inaugurated a business seminar in the field of agriculture and agro technologies with the participation of company representatives and businessmen from both countries alongside the official delegation of the Israeli Ministry of Agriculture and Rural Development.

The visit of Minister Shamir marks the beginning of the programs to celebrate 55 years of diplomatic relations between Nepal and Israel.

Receiving Israeli Minister for Agriculture and Rural Development Yair Shamir at his residence in Baluwatar, the Prime Minister said Nepal would head toward financial prosperity after promulgation of a democratic constitution.

At the meeting, Koirala had appreciated Israel for employment and training opportunities it provided to Nepali migrant workers.

Nepal Army In Search Operation To Find Out Missing Korean And Nepali In Annapurna Circuit By NEW SPOTLIGHT ONLINE 1 day, 23 hours ago