Gripped by a prolonged political instability, the nation is witnessing a number of incidents related to sexual abuse, rape and violence against women in the recent times. 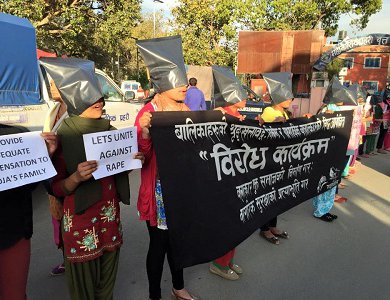 Gripped by a prolonged political instability, the nation is witnessing a number of incidents related to sexual abuse, rape and violence against women in the recent times. This has raised a question about how safe Nepal is for women and girl children. In passing through a transition from violent insurgency to peace, Nepal has been in a state of disorder, with weak state authorities and institutions. As religious, moral and cultural codes are gradually weakening and sate authority is declining, women and girl children are getting more vulnerable during this transition

The country has seen a public outrage over the death of a 6-year old girl child after she was raped in Bara, 150 kilometers south of Kathmandu. Two other incidents of rape have been reported in Jhapa and Terhathum.

Last week, a 13-year-old girl was raped at Naya Bus Park of Birtamod Municipality in Jhapa. Area Police Office, Birtamod, arrested Suryaman Tamang, 40, of the bus park area the same night on the basis of a case filed by the victim’s family.

Tamang had been working as a construction worker in the bus park area. According to Inspector Narayan Prasad Gautam, Tamang had lured the girl into coming to the rooftop of a house where he sexually abused her.

“We are waiting for medical reports; we will be able to give more details only after that,” said Inspector Gautam, adding police have already launched an investigation into the case.

The second incident of rape was reported in Thoklun Village Development Committee of Terhathum district, where a 7-year-old girl was raped when the minor had gone to Prem Shrestha’s house to charge a mobile phone. Police managed to arrest Shrestha the same night.

Like these three minors, almost four women are raped in the country everyday in day light and most of the victims are of age below 16 years.

These are not the only incidents of rape -- their number has drastically increased in the last six years. According to Nepal Police, 796 incidents of rape cases have already been recorded in the first seven months of current fiscal year.

“It is very unfortunate that the incidents related to rape have gone up to 25 percent more than the last year. The time has come for all of us to do something to prevent this,” write Sharu Shrestha Joshi on her Facebook wall.

Mona Shrestha commented on Sharu’s wall that multiple action from everyone is required, including researchers, media personnel, advocates, lawyers, and policy makers, and donor agencies for joint effort to create a society where girls and women live a life without the fear of RAPE!!!

Police records showed that a majority of girls and women rape victims were from Janjatis and Dalits. Out of  a total 1,376 rape victims in the year 2014, 514 were Janjati, 251 Dalit, 232 Madheshis and 220 from Brahimin and Chettris.

However, a very few rapes are reported to police. According to a study, around 40 percent cases are reported in Police. Most victims fear rejection and reprisal from the perpetrators; and when they report, the conviction rate is very low. As the awareness increases, the conviction rate in Nepal has reached over 80 percent.  The low rates of reporting and conviction lead the perpetrators to continue victimizing women.

RA Prentky puts rapists into four typologies: Compensatory, exploitative, displaced anger, and sadistic. The compensatory—or gentleman—rapist is a loner and passive loser, often brought up in a single-parent home. Usually not violent, he picks up his victim for a date and rapes her at her home when she is alone, usually in his own neighborhood, to make up for his lack of self-esteem and other inadequacies.

Often athletic, well-dressed, stylist, arrogant, and maybe a divorcee, the exploitative rapist picks up his victim from a public place and offers to walk her home or give her a lift. He rapes the victim to assert his masculinity and derive sexual gratification, away from his home or work.

The displaced anger rapist—often short-tempered, athletic, married, philanderer, abused by his parents as a child, and from a dysfunctional family or a foster home—blames women for the injustices done to him and rapes them to retaliate. He aggressively uses physical violence.

The sadistic rapist—often married, middle class, educated, meticulous planner, and physically abused as a child—tortures his victim to increase fear and pain, which excite him, before raping. He rapes to degrade, torture, and kill.

As Nepal is in transition and transforming from violent conflict to peace process, the state authorities, like police, are yet to maintain the order. For almost a decade long conflict, the society was governed by disorder. Due to conflict, people broke the religious, moral and cultural codes creating a big vacuum.

The villages were virtually a den for criminal activities. Many minor girl children were recruited as insurgents. In the absence of social and legal order, many cases related to rape and violence against women went unrecorded.

“Nepali society became more violent. The current trend of rape incidents is the result of the society getting violent in nature,” said DIG Kamal Singh Bam, spokesperson of Nepal Police. Along with this, individuals with criminal mentality have also increased. Our society is losing the social order. In the past, religious, cultural and social codes prevented these kinds of crime. As society is now more open with access to pornography, through internet, it has promoted the incidents of rape.”

Why Minors Are Raped

Along with Police, sociologists and criminologists also point to the growing socio-psychological change.  “Based on religious, cultural and moral codes, the Nepalese society used to be governed by social harmony. Individualism is gradually taking root over communities and religions, cultural and moral fabrication is weakening, the incidents of heinous crime like rape, murders and so on are increasing,” said Dr.Tika Ram Gautam. “When one starts to give more importance to individual needs, it also increases the incidents of rape and crime,” said Dr. Gautam.

As the Nepalese society is transforming from the traditional to modern one, its social fabric is gradually weakening. Thus, there is an increase in socio-psychological disorder,” said Dr.Gautam.

Psychologists hold different views. Rapists are the persons with psychological disorder. When people lose their rationality to judge right and wrong, they commit rape. Alcohol and drugs normally increase stimulation and people will also lose rationality,” said Dr. Saroj Ojha, psychologist. “Social reasons are also responsible for the rape incidents. As internet provides a lot of pornographic materials, it also helps increase these kinds of incident.”

Some hold the view that there is the need to provide education on Reproductive Health so that people have general knowledge about sex and pleasure. “Due to lack of sexual education, many young girls even do not know whether they are raped,” said Dr. Ojha.

Despite promulgation of various laws to protect the women’s rights, lack of effective implementation is responsible for the present state of disorder.

In the last few years, Nepal has already promulgated the act like Domestic Violence (Offence and Punishment) Act, 2066 (2009) and Domestic Violence (Offence and Punishment) Rules, 2067 (2010), Sexual Harassment Act 2014 have been promulgated to stop any kind of violence against women which can happen within the home and from the family members and to punish the perpetrators.

These acts have clearly defined the terms, domestic violence, physical harm, mental harm, sexual harm, economic harm, the victim and the perpetrator. Section 2 (i) and 2 (j) of the same act have defined the police station and the court connecting it with section 4, that has directed the filing of complaint in case of domestic violence against women and has explained about the procedure of complaining, filling, the checkup of victims, security measures for the victims.

The provisions enshrined in Muluki Ain (Civil Code) of Nepal; under the chapters Husband and Wife, partition, women property, hurt/battery, Intention of sex, rape and incest address the violation which can occur against women in different forms that shall be correlated with domestic violence cases.

The heinous crime committed against a minor in Kalaiya, district headquarter of Bara District, has raised a grave concern in the society. Various civil society organizations organized a protest program in different parts of Nepal.

Women rights activists in Pokhara demanded stern action against those involved in rape and other incidents related to violence against women and children.

“Rape of a four-year-old girl, another case of rape of a 14-year-old girl by a teacher in Kaski and death after rape of a seven-year-old girl of Kalaiya, Bara, suggest that there is an urgent need to take strong initiative to curb violence against women and children and formulate strong laws to ensure maximum punishment to culprits,” said the activists in their statement.

They have also demanded that the government take immediate steps to deliver justice, punish the culprits, compensate victims’ families and provide free treatment to victims.

At a press conference in the Capital, CPN-UML-aligned All Nepal Women Association Chairperson Bidhya Devi Bhandari said the Bara girl rape case has tarnished the image of the country.

“It was an unfortunate incident for child rights and human rights sector. There is the need to mete out severe punishment against the perpetrator,” said Bhandari.

Nepali Congress (NC) sister wing Nepal Women Association Chairperson Dila Sangroula demanded life imprisonment with confiscation of all property to those committing heinous crimes like rape. “Women of every age group, either they are minors or septuagenarians, are falling prey to sexual assault which is a very disappointing matter,” said Dila Sangroula

How Safe is Kathmandu for Girls

As are other parts of the country, the capital city is unsafe for women and girls. According to statistics maintained by the Metropolitan Police Commissioner’s Office, women and children in the Kathmandu Valley are vulnerable to physical violence and sexual attack.

According to MPCO statistics, cases of rape and kidnapping are on the rise in the Valley. The MPCO recorded 67 incidents of rape so far this fiscal year 2015-16 (mid-July to mid-February) compared to 64 in the corresponding period of last fiscal year 2014-15.

“We are very much concerned about increasing cases of rape and sexual violence, despite remarkable decrease in other crimes like murder, attempt to murder, suicide, use and smuggling of arms and explosives, drugs trafficking, human trafficking and vehicular homicide. Most of the rape victims are underage girls,” said AIJP Bigyan Raj Sharma, Police Commissioner.

AIGP Sharma warned, “Police maintained zero-tolerance to any forms of violence against women and children. In the Valley, police, however, managed to nab all the culprits. The MPCO is doing the groundwork to introduce Android-based Crime Reporting and Response System in the near future. Any person can report an incident to police via their smartphone once the system is launched,” said AIGP Sharma.

The MPCO has also started maintaining Accused Data Record System. “We have already maintained data of as many as 776 accused. Maintaining fingerprints and other details of arrestees is on the cards,” he added.

Law enforcement and education are necessary, but they are not sufficient to prevent rapes. Women, families, societies and inventors also need to work together to root it out. Recently, police have already created women-only cells to receive and investigate rape complaints in strict confidentiality.

As Nepal has been passing from violent transition to competitive political process giving impunity to the many involved in the crime in the name of ideology, it will be very difficult to reduce the incidents related to crimes, including rape. Similarly, social disorder and lack of law and order need to be addressed to make the society safe and secure.

Nepal And India Will Meet On August 18 To Discuss Development Issue By News Desk 8 hours, 21 minutes ago

Prachanda And His Group’s Activities Are Disgraceful: DPM Pokharel By NEW SPOTLIGHT ONLINE 3 days, 9 hours ago